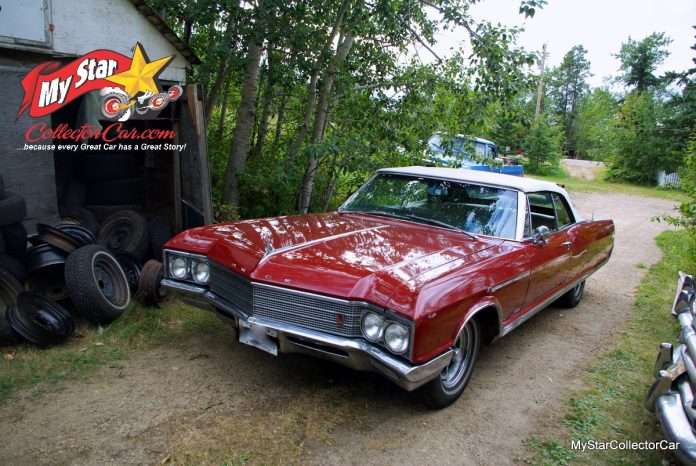 The 1960s were famous for their muscle cars, even though the decade also had another automotive angle that got less of the spotlight at the time, namely the big cars that shared the road with the muscle cars.

A 1966 Buick Electra 225 convertible most assuredly belonged in the large car category because these big boys were roughly 225 inches long and 80 inches wide, a lot of area that could comfortably handle a small army of occupants.

Marc Bink has owned a 1966 Buick Electra 225 convertible since 2009 and spent his first year readying the big drop top for a return to the road. He was able to sell his wife on the purchase with its color because she liked the maroon paint job on the Buick.

The big convertible was originally a gold-colored car and had undergone the paint transformation prior to the purchase, a fact that weighed heavily in Marc’s favor during negotiations with his wife.

Marc liked the fact that nothing else was modified on his Buick because its period-correct technology was important to him. The Buick’s factory engine is the famous 401 nail-head big block coupled to a factory column-mounted automatic. It still has its original decals that showcase its performance and include the Wildcat label, along with a 445 number that indicates the big torque numbers in the engine.

Marc mentioned his Buick’s engine is a high compression/high octane combination that only runs on premium gas and added, “Anything else will blow it up”.

The car has every option except air conditioning, according to Marc. The list includes power brakes, power steering, power front seat, power top, power antenna, cruise control, an AM/FM radio and 8-track player, along with an unusual outside thermometer attached to the driver’s mirror that is still accurate according to Marc.

The major goal for Marc has always been the same: get the big Buick convertible back on the road and enjoy the ride. He has more than exceeded that goal and drives the car at every opportunity, including an annual trip through the Rocky Mountains to Canada’s West Coast from his Alberta home.

The journey includes British Columbia’s Coquihalla Highway, a fast-paced freeway with a 120 km/h (roughly 72 mph) speed limit that is easily met in the big Buick. In fact, Marc’s large-and-in-charge convertible can handle an 80-90 mph pace upon request, according to him.

The big car “drives like a cloud”, according to Marc, so it is still well-suited for long drives on the road, and he is more than willing to use it as a long-distance machine during the summer months. It is clear Marc is a big fan of the biggest Buick built in 1966 and likes the fact he is “the only big Buick guy around” in his social circle. A full-sized Buick convertible from the mid-60s is a way to break the ice in the car hobby because very few of them exist in 2021.

THE CORVAIR IN ACTION! – A PRE-RALPH NADER PROMOTIONAL FILM BY...