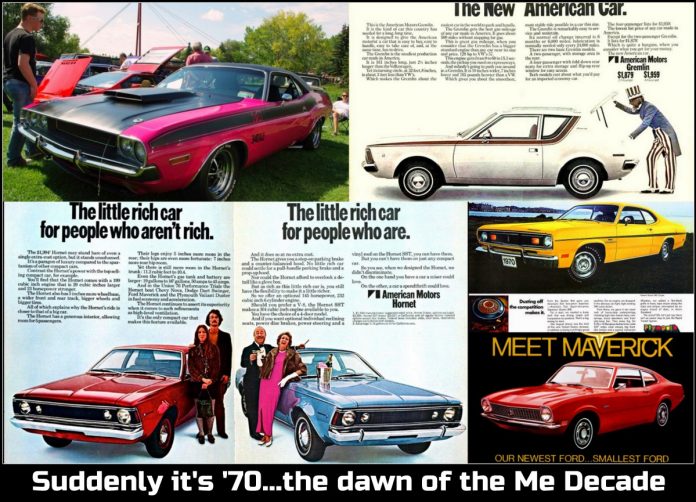 The end of the 1960s marked a time when Neil Armstrong left a lunar lander launch platform on the moon and about half a million hippies were left on their own for three days on Max Yasgur’s farm in upstate New York.

We wanted the Apollo 11 crew to make it back safely to Earth and didn’t really care whether the hippies found their way back to Planet Earth from Woodstock.

However, the dawn of the 1970s was a noteworthy occasion in the automotive industry because many car manufacturers celebrated the decade change with an array of style changes and new model choices.

1970 marked the debut of the AMC Gremlin; a sub-compact from American Motors that took dead aim at the market that was dominated by the Volkswagen Beetle. The Gremlin looked like it had already been victimized by a rear end collision with a big rig, but its bold style was nothing new for the boys from AMC.

A larger American Motors stablemate that debuted in 1970 was AMC’s Hornet compact model. The Hornet was essentially a Gremlin that hadn’t shrunk in the wash and had a conventional trunk design. The Hornet was a sleeper when customers ordered the 304 small block V-8 and surprised the competition on the street with its performance, proving that good things can indeed come in small packages in 1970.

Ford introduced its Maverick model as a replacement for the Falcon in 1970. The two Ford models shared the 1970 model year for a brief period until the Falcon flew into the sunset for good in mid-1970.

The Maverick was a low-cost compact that offered a sportier style than its Falcon predecessor, but few car guys dreamed about owning one because 1970 still had plenty of muscle cars in the spotlight that year.

A brand-new pony car from Chrysler was introduced in 1970 when the Dodge Challenger hit the showrooms. The Challey was a sporty counterpart to the newly re-tooled Plymouth Barracuda in the Chrysler family and offered many performance choices that ranged from mild (225 Slant Six) to wild (426 Hemi).

The ’70 Challenger was known as an E-Body because of its new-in-1970 design and became an instant legend in car guy circles because of its stylish looks and tire-melting capability when buyers checked off the right boxes in the powertrain category.

The major difference between a ’68 Road Runner and a ’70 Duster was the engine choices. A Road Runner only came with big block choices that ranged from scary fast (383 cubic inches) to complete insanity under the hood (426 Hemi)-while the Duster offered a 225 cubic inch Slant Six base engine and worked its way up to the legendary 340 small block V-8 engine choice.

The dawn of the 1970s was a pivotal moment in time during the 20th century and nowhere is this fact more evident than in the new car models that debuted in 1970.