Most people don’t think about how things get to places like your local grocery store but the odds are pretty good that a big rig hauled it.

They didn’t think about it back in ’59 either.

Nevertheless, trucks have been hauling stuff since the Model T became the Model TT truck and people barely noticed how the stuff got there then…or now.

That’s why this ’59 IHC was such a welcome sight at a large show full of classic iron because working rigs like this never got the glory-they just got things done.

Ladies and Gentlemen, take a look at this week’s unsung hero and MSCC Star of the Day. 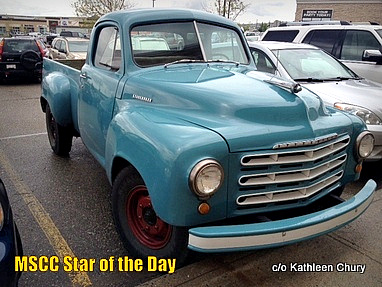 Not every classic ride is found at a car show. In fact, some of the best MSCC Star of the Day pictures come from an everyday encounter on the street.

This Studebaker truck is a great example of what is out there in the real world.

There’s no way to fill in the blanks completely on this old pickup without an interview but it’s clearly used as a daily driver.

Maybe this was merely a quick run to the store or perhaps this old Studebaker is a sole means of transportation.

Either way the Studie was a very cool and rare sight this week plus it was an easy choice for MSCC Star of the Day.

JUNE 7 STAR OF THE DAY: DODGE DART SPORT-WHAT’S IN A NAME? 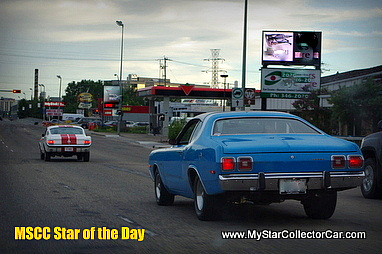 The Dodge Dart was based on the concept of sensible, reliable and affordable transportation when it debuted in 1960. They got smaller over the next few years and eventually became compacts…in the 60s sense of the world compact.

The 340 option woke up the Dart in ’68 and by ’71 the Dodge Demon debuted in response to the Plymouth Duster.

That Dart Sport debuted after a two year run because the name Demon didn’t resonate well with a lobby group, hence the name change.

Fortunately the name change didn’t diminish the cool factor as this MSCC Star of the Day Dart Sport proved last night on the street. 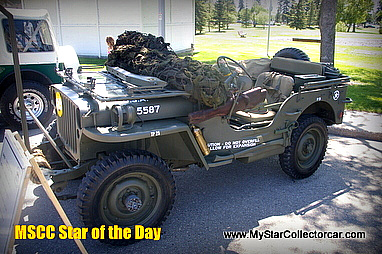 There was really only one choice for the June 6 MSCC Star of the Day-this 1942 Willys Jeep.

June 6 1944 was the date of one of the most significant battles in World War II and it came with a very simple label…D-Day.

The Allies came together for this massive operation that became a major turning point in the war but it came with a huge price with thousands of casualties.

This Jeep was there on D-Day so there was no other choice today for MSCC Star of the Day.

This Jeep was featured in a July 2012 MSCC article so follow this link for the incredible story behind this D-Day survivor. 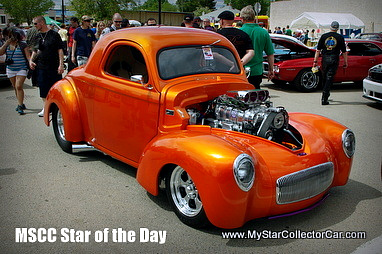 This one was at a show on the weekend and it followed the typical “try to get a clear shot through the people” scenario.

The Willys was an instant hit on the track because it made one of the coolest and most competitive gassers in the history of drag racing.

In fact, if you Google the word “gasser”, the name Willys is probably in the first sentence.

This Willys is a Star of the Day because it’s like Elvis-still cool nearly 50 years in the spotlight.

JUNE 4 STAR OF THE DAY: 1966 OLDMOBILE DELTA 88 CONVERTIBLE-COOL COMES IN MANY FORMS

A 1966 Olds Delta 88 convertible is a rare sight in 2013. One reason is pretty obvious-they only made 4300 of these large, comfortable drop tops.

There’s an interesting blend with a car like this big Olds convertible because it’s an open air car with the ride and comfort of a large North American 60s era luxury car.

This ’66 Olds Delta 88 was in a parking lot yesterday on a side road but it stood out so much that it could be spotted from almost a block away.

That alone is worthy of MSCC Star of the Day status.

JUNE 3 STAR OF THE DAY: A COUPLE OF CLASSIC CHARGERS ARE A MAGNET 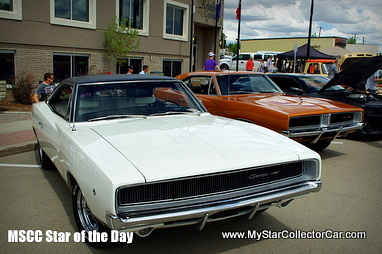 The MSCC Star of the Day or Star of the Week choice is based on instinct and gut reaction.

Sometimes the process is pretty simple-scroll through the thousands of pictures on file and pick the one that jumps out at you.

It’s a process that would drive Star Trek’s resident Vulcan Mr. Spock crazy because it’s based on emotion over reason.

That’s what happens in the car show off season but during the car show “on” season you see two classic Chargers like this ’68 and ’69 at a show last Saturday and the gut reaction is pretty basic.

“That’s an MSCC Star of the Day shot”.