APRIL 7 STAR OF THE WEEK:WINTER IS JUST A CONCEPT TO A COMMITTED CAR GUY IN A 29 MODEL A

Car guys are patient by nature. That’s the only coping mechanism that gets them through a car project that begins when the youngest kid is in diapers and ends when the kid graduates high school.

The only thing that tests their patience to the redline is winter…especially a long, drawn out winter like this winter.

The guys who have their cars in storage are constantly monitoring the weather stations because that first stretch of spring weather draws them out like moths to light.

Then there are the guys who just need a nice day to pull out the old iron. Guys like the Star of the Week car guy who took his ’29 Model A out last week just because it felt right.

There was snow in the fields but the sun was shining and the road beckoned…winter was a mere concept.

APRIL 6 STAR OF THE DAY: RAT ROD IN TRAFFIC-TRAFFIC JUST GOT BETTER 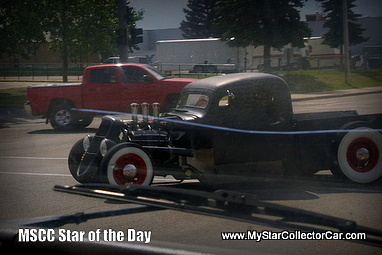 There’s definitely a cult following behind the rat rod…except that cults are usually small in numbers.

The same can’t be said for the rat rod movement because the fan base gets bigger every year.

There’s a built-in rebel factor with rat rods because their roots go back to the infancy of the hot rod hobby when stripped down Model Ts and As were fitted with non-stock flathead Ford V-8s.

They were driven by guys on the fringes of the law who wanted to showcase their talent behind the wheel of cars they built.

This Star of the Day was on the street back in 2010 and it’s a classic example of a past and present phenomena called the rat rod. 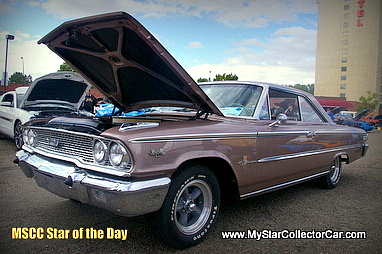 Ford is more well known for the Mustang when the subject of performance comes up but in reality, the Galaxie had it covered for years.

This 1963 Ford Galaxie is a great example.

There’s a 427 cubic inch monster under the hood of this big, bad Galaxie because Ford was in a horsepower bloodbath with Chevy and Chrysler and everything was on the table.

This particular Star of the Day was at a Ford meet back in 2010 and it was like Clint Eastwood because this big,bad Ford still looked like it could easily handle a street brawl…

APRIL 3 STAR OF THE DAY: CHEVY CAMEO- THE SETTING WAS PERFECT FOR THIS CLASSIC 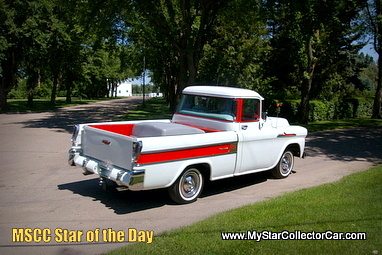 The Chevy Cameo was the answer to the question, “how did they dress up a pickup truck in the 1950s for the country club crowd?”.

These trucks added urban style to a rural workhorse and today they’re high up the food chain in the world of collectible pickups.

This one was at a show back in July 2011 and the setting was perfect for this classic Chevy truck because it was an older area with treed lanes and perfect landscaping.

That’s the kind of classy environment that showcases this Star of the Day. 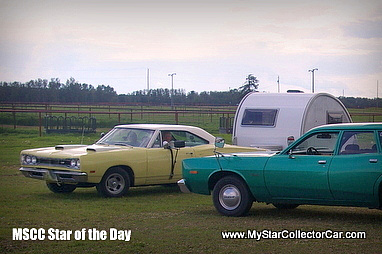 Some people may look at this picture and automatically assume it’s an old Chrysler camping ad.

There’s a mid 70s Dodge wagon and that ’69 Super Bee is hauling a trailer instead of smoking someone on the track.

It all adds up to a staged scene but this was the real deal back in August 2010 when these cars were in the middle of a 4500 mile tour across Canada so there’s nothing “stagey” about this scene.

That’s why this classic example of Mopar muscle is a Star of the Day.

APRIL 1 STAR OF THE DAY: A COUPLE OF CLASSICS FOR THE START OF THE APRIL SHOWER SEASON 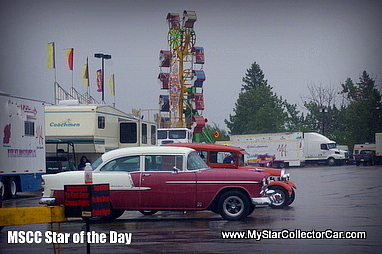 This picture was taken on June 14 2012 but it definitely fits the “When April Showers may come your way” theme.

This show was clearly rained out but 8 old rides braved the brutal weather that day and made it to the show.

Car shows are a bigger crap shoot than Monte Carlo because everything hinges on the weather gods to make a show work.

Sure the songs ends with the lines ” They bring the flowers that bloom in May,so when it’s raining have no regrets,because it isn’t raining rain you know, it’s raining violets”.

The song doesn’t spell it out but even violets can wreak havoc on a paint job so the Star of the Day is anyone like these guys who brave April showers in an old ride this month.