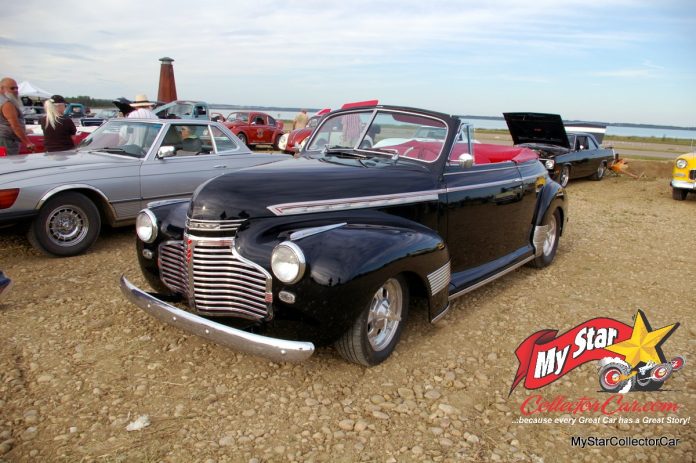 Guy Tofsrud was a local legend in his area’s car community because he was a true car guy who immersed himself in the hobby, both on a personal and professional level.

Guy owned Country Collision in Red Deer, Alberta Canada, a body shop that leaned heavily toward Guy’s interest in the restoration and custom angle for retro rides. Unfortunately, Guy is no longer with us, but his legacy lives on with Comfort Collision (owned by one of Guy’s star employees who shared his vision and philosophy about the hobby), along with a beautiful 1941 Chevy resto mod convertible now owned by Dave Weidner, a car guy with his own long family legacy in the automotive world.

The Weidner family own a GM dealership in Lacombe, Alberta Canada and their car guy links extend back to Weidner Motors founder Lou Weidner, a fearless driver who hand-built his dirt track car to compete on Alberta racetracks during the 1950s. Dave and his brother Robert still have the car.

Dave likes legacy cars, so he always admired Guy’s 1941 Chevy custom convertible because of the build quality and the creative touches on the car. He was given an opportunity by Guy’s brother to purchase the car a few years after Guy’s passing because the brother knew Dave would be the right owner for the car.

In other words, Dave would respect the Chevy convertible’s history because he respected the way Guy transformed it into one of the nicest resto mods in his area.

Dave would also drive the stylish Chevy drop top whenever the opportunity arose for him, including a 1360-mile (2189 km) trip to the famous Hot August Nights car show in Reno, Nevada. “Hot August Nights” is the right name for the show because the desert sun can drive the temperature up in the 100-plus degree Fahrenheit range (over 37 degrees C for the metric set), so the trip was a good test for Dave’s Chevy ‘vert.

Fortunately, Guy built reliability into the ’41 Chevy. He installed a Nova front clip on the car so he could use a 3-deuce (triple carb) 350 Chevy small block, along with an upgraded suspension, steering and power front disc/rear drum brake system courtesy the donor Nova.

The Chevy has creature comforts like power steering, tilt, and air conditioning for any occasion when you head to Reno, Nevada during the summertime. Dave told MyStarCollectorCar he kept the top up on his Chevy convertible because of the severe heat and instead relied upon the air conditioning, although it is an old school system that was installed by Guy during the build and may have been outmatched by the Nevada heat.

The 350 is hooked up to a GM 4-speed automatic transmission that provided a wide range of gear ratios, so the car was only hitting 2200 RPMs at 65 MPH during the long journey to the Reno show from Central Alberta.

Sharp-eyed readers may notice the stylish 1958 Chevy steering wheel on the car, a creative touch added by Guy during the build process.