We used to see plenty of 70s era station wagons on the road.

They were part of the fabric of a bygone era when wagons ruled the road.

The 2010 Coasters cross-Canada tour included a 1975 Dodge Coronet that looked like it came straight out of the Brady Bunch.

Incidentally, the Coasters Tour is a journey across Canada for a dedicated band of vintage vehicle owners and not a musical act in this case. They see the country in the best possible fashion: behind the wheel of a vehicle that was king of the road a long time ago. 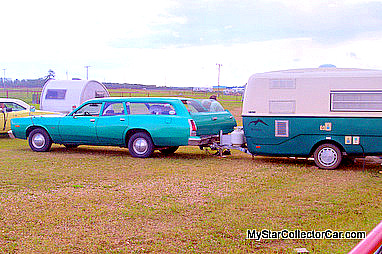 Joan and Gordon Brown left Nova Scotia on the 2010 tour with three grandchildren and a small trailer in tow. The kids were lucky enough to spend their summer holidays on a once-in-a-lifetime car trip in a Brady- mobile with their grandparents.

That is better than a lottery win in the grand scheme of life–much better. It was due to Joan and Gordon’s desire to see Canada with their grandkids as a 65th birthday retirement gift to themselves.

Gordon managed to locate a rusty 1975 Coronet that needed floors and rear quarter panels. It now has Pontiac quarters and Ford Taurus trim under the doors. We learned rather quickly that Gordon was a practical man with practical solutions to a problem.

Quite frankly we would not have known that Poncho metal was on this Mopar. Gordon operated within a budget and constructed a practical way to join a Coasters adventure. He was not interested in a show car, he was interested in a car that showed up for the tour.

Mission accomplished for the Browns and their band of young travelers. The Coronet delivered the same level of reliability that made Pa Brady want one in his driveway. Its 318 engine had performed with trouble-free loyalty for the Browns.

Our conversation indicated that the Browns would like to be on the next Coasters tour in 2017.

We predict that they will drive their 1975 Coronet wagon on that tour with a few more grandkids and the trailer in tow.

MARCH 2013 FALLEN STARS: THE PERFECT DAY TO SAY GOODBYE TO...