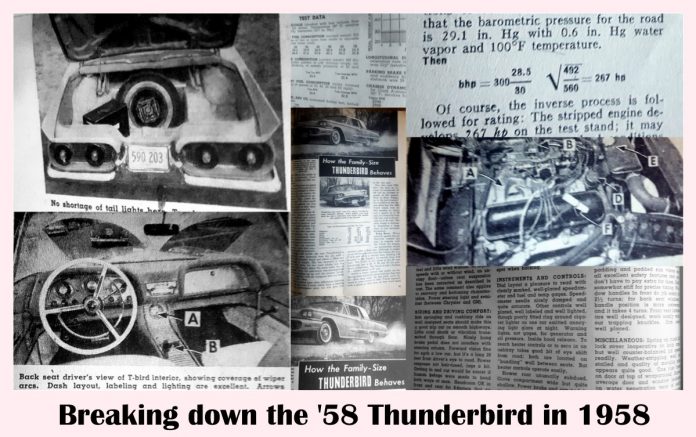 There were plenty of reasons to buy automotive magazines during a bygone era.

‘Science and Mechanics’ was an automotive magazine with a scientific edge, so it ran at a higher level than its competition during its long run.  When we were kids in the 1960s, we barely understood the gravitational science behind Wile E Coyote’s rapid descent into a canyon and just assumed he would become splat-shaped (but not dead) after the fall. Therefore ‘Science and Mechanics’ was a distant Door Number 3 (or 11) when it came to our childhood reading choices because it dealt with real science.

These days a vintage August 1958 ‘Science and Mechanics’ was an eyeopener for us here at MyStar because we finally gained enough reading skills to understand the articles in the magazine and thoroughly enjoyed the experience.

For example, ‘Science and Mechanics’ tested a 1958 Ford Thunderbird and added plenty of information about their experience with the first big T-bird to hit the market. Most car guys refer to the 1958 Thunderbird as a “Square Bird” because it had a big, bold and beautiful new style.

A 1958 Thunderbird was the first T-Bird model to have a back seat and moved the big Ford into the luxury class along the way. ‘Science and Mechanics’ acknowledged this radical departure by Ford from their earlier 1954-56 two-seater Thunderbirds that were classified as smaller sports models and compared them to the big new ’58 T-Bird in the article.

The ’57 T-Bird maxed out with the 312 cubic inch engine option because it was smaller than a ’58 Thunderbird and required a smaller herd of ponies under its hood.

The ‘Science and Mechanics’ 1958 T-Bird was subjected to a battery of tests analysis that went well beyond the typical car tests from that automotive magazine era. The data even included “cornering sway” which measured the degree of roll exhibited by the T-Bird when it was put through the paces on a cornering test.

For the scientific record, the 1958 Thunderbird had a 3.5-degree cornering side sway; a number considered by ‘Science and Mechanics’ to be about average for big domestic cars from that era. Most car guys of sound mind and body would not choose the 1958 Thunderbird as a rally or Grand Prix car because they were essentially luxury boats built to flatten out bumps and not curves on the road.

Another interesting statistic put forth by ‘Science and Mechanics’ was the Thunderbird’s oil consumption. The test people found the car burned about a quart of oil in roughly 600 miles, even though this startling figure did not seem to alarm them because new vehicles from this era were oil-burners right from the factory.

The article also included a Tech Talk lesson that explained the basic physics behind the performance test results based upon temperature, pressure and moisture conditions. The ominous presence of math formulas frightened us as much as Shock Theater horror movies from our childhood, but we at MyStarCollectorCar were able to conclude that ‘Science and Mechanics’ paid plenty of attention to the science behind the mechanics in their articles.

Two thumbs up for their efforts.