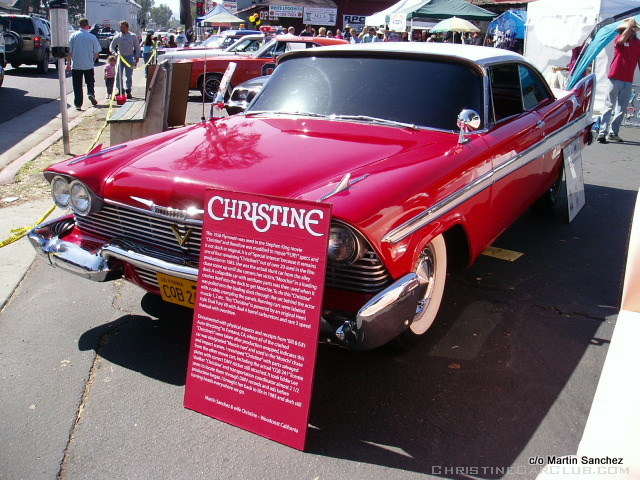 Martin Sanchez is either the luckiest guy in the world or he has incredible foresight.

Either way he’s the proud owner of the second Christine in this month’s “scary rides” edition of MSCC.

This car is an actual movie car and Martin’s own story parallels the movie plot in an uncanny manner.

Martin’s first “Christine” was actually a damaged ‘69 Pontiac convertible that had been buried in a back yard-up to its sills in dirt and grass.  Martin pestered the owners until they relented and sold him the old Poncho. That car became a 2-year project and during that time Martin’s shop teacher recommended that he read Steven King’s Christine… 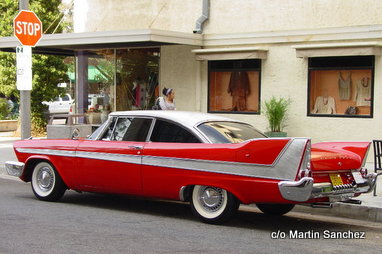 That set the fin car hook for life and Martin began a serious search for a ‘58 Plymouth 2-door hardtop. But as he says, “I guess I had a little competition from John Carpenter”.

Meanwhile in the ‘art imitates life’ phase of the story some punks vandalized his beloved Pontiac-too close to home for the Christine obsessed Martin. At that point he was a guy with a trashed Pontiac and little chance of owning the fin car of his dreams. 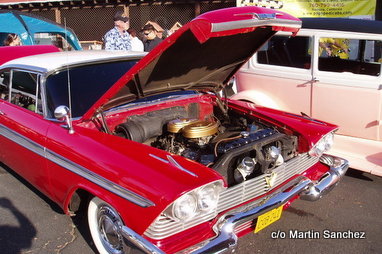 Martin was a supervisor for a valet parking company when he had to referee a dispute between an employee who was threatening to tow the man’s vintage cars because they were parked in a red zone. The man was Al Newman of “Classic Wheels of Anaheim” and he had a shop full of amazing iron like the “Munster” mobile and Eddie Munster’s bicycle.

Martin hit a life changing home run when he asked Al if he could track down a ‘58 Plymouth 2-door hardtop, “Christine fan huh?” Fate stepped in because Al had actually supplied 2 of the movie cars including the ‘before’ Christine-it actually looked like that even before the Hollywood magic. Al knew that the movie cars had a date with the crusher but he made a few calls.

A few weeks later Al called back to tell Martin that he had found two ’58 Plymouths-one had front-end damage and no motor, the other was rough but running. 900 bucks would buy the mobile car but it still had to be flat-bedded to its new home. Then the magic moment. Al said “Oh, did I mention that it was one of the Christine cars from the film?‘ Martin was stunned and listened patiently as Al explained the role the car had in the movie. 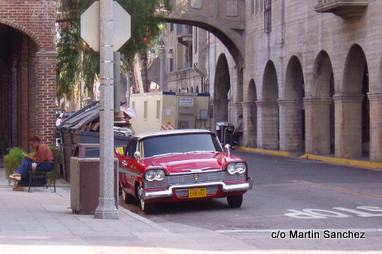 Martin’s euphoria disappeared when the delivery took place-the car was a mess. Also this Christine movie car had rubber moldings, braces and muscle 2 labels because as Al told him, “That was the #2 stunt car used in the Moochie chase scene I told you about. She’s yours now”. Martin found out the hard way what movie companies think of props plus he had to explain this automotive disaster to his parents.

Happily, Al bailed the kid out at this point-it had to be the mixture of shock and disappointment on Martin’s face so he directed him to Bill and Ed’s Auto Wrecking. That’s where all the unfortunate movie Christines were sent to be dismantled and crushed. So much for the movie star lifestyle.

But the yard was a goldmine for young Martin. He said, “they had doubles and triples of everything part I needed”. He couldn’t afford a show car so this car star became a daily driver until the early 90s. It’s a lot like going to a diner and finding a Hollywood star behind the counter taking food orders.

The star went into seclusion after that-Martin retired Christine from daily service and the car only came out occasionally, because, as Martin said “nobody cared about this fine finned beauty” except for an Offspring video and cover appearance.

When Barrett-Jackson sold a promo ‘Christine’ for $167,400, Martin thought, “she is finally appreciated and I should bring her out of hiding and back into the world”. The car is a big hit again at any shows in his area-headlines read ‘Faded Hollywood Star Back On Top’.

For Martin it’s a much bigger picture because he’s truly a car guy- it’s great to own a piece of film history but Martin is really happy that the Christine legacy is a brighter future for these finned classics. After all he says “I think, had it not been for this film, these cars would still be sitting in fields and barns rotting away to oblivion. ‘Christine’ increased awareness of these finned Forward Look cars and stimulated huge interest all over the world. I’m glad I kept her all these years and parted with her”. 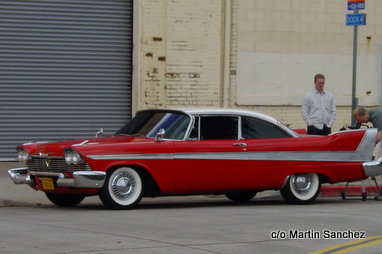 Postscript to this story-re: Martin’s original ‘69 Pontiac? He still owns that too.

Who says Hollywood horror movies can’t have a happy ending?