The 1972 model lineup for Chrysler Corporation was down one engine option for its customers.

Their buyers could no longer check off the 426 Hemi option for their newly ordered Mopar.

‘The last elephant was stuffed under the hood with the conclusion of the 1971 production run, although the monster motor components would continue to be manufactured by Chrysler.’

Installation was totally in the hands of the consumer.

The 426 Hemi was a victim of its notorious reputation as a killer on the street. It murdered the competition on pavement, but its understated horsepower rating bluff was finally called by insurance companies. 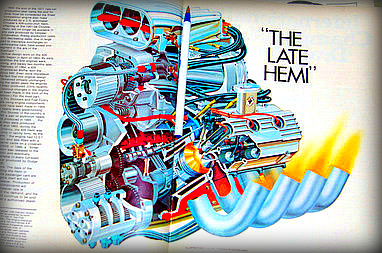 They attached a hefty premium on 426 Hemi-equipped cars to let the world know that insurance companies viewed the Elephant as the quickest factory animal on the planet. The 426 Hemi Elephant was the kind of animal that was very dangerous and hard to control in captivity.

Car Craft magazine included a feature about the death of the factory Hemi in its October 1971 issue and paid tribute to it in their opening paragraph:

“With the end of the 1971 new-car production year came the end for what must be considered the finest competition engine ever mass produced by a U.S. automaker”.

The life and death of the factory Hemi will always be the focal point of the muscle car debate about who was the baddest street animal from Detroit in the 60s. The Hemi got a lot of votes for the title-including many from the insurance companies.

The 40th anniversary of the last factory Elephant has not quelled the debate for many car guys.

DENNIS:And in the 40th anniversary of the ‘Nanny State”, we have the Chevy Volt. The mirror image of the union/government. Slow, inefficient, costly and dangerous when left to its own devices.

It’s time for a change we actually can believe in. Vote all the ‘politicians-for-life’ out!