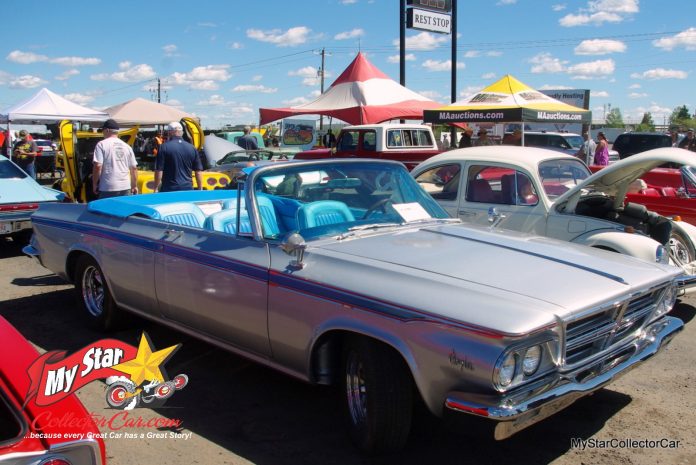 Most car guys are used to the concept of tribute cars that typically celebrate rare original muscle cars from the late 1960s and early 1970s, but a 1964 Chrysler Windsor convertible with 300 badges is an unusual tribute car.

The Chrysler 300 letter series cars were already muscle cars long before the debut of the legendary Pontiac GTO, largely because these finned rockets on wheels from the 1950s could hit warp speed in a big hurry.

The Chrysler 300 series continued into the 1960s, but their legacy as speed machines was not a huge factor by 1964. Nevertheless, they were still fast, furious, and ultimately luxurious with a unique body style that lasted for 2 years (1963-64) and defined the Chrysler’s transition from a winged warrior into a newer finless body.

Wayne Demkiw always liked the 1964 Chrysler’s body style, along with the 300 legacy that was still available in the big C-body’s lineup that year. However, 300 models were not readily available in Canada then or in 2019, particularly in convertible form, so Wayne bought a 1964 Chrysler Windsor convertible and devised a game plan for it three years ago.

Wayne was unimpressed with the Windsor’s factory color package (maroon exterior with a maroon interior), so he decided to make the convertible pop with a Toyota silver exterior and a bright blue interior. The new color scheme was tied together with a red pinstripe package on the side trim that runs along the length of the Chrysler’s body. The result is a stunning new look for the car.

As mentioned, the ’64 Chrysler convertible is a Windsor model, but Wayne liked the badging and style of the 300 models, so he included them in the exterior components on the convertible.

The original fenders on the convertible were in sad shape, but Wayne was able to find two replacement fenders for his ’64 Chrysler project. He also sent the steering wheel to California for a color match with the interior and general refurbishment.

He kept the car’s original powertrain, a 383 cubic inch engine coupled to a push button automatic transmission that was a famous Mopar feature from 1956 until 1964 before legislation forced Chrysler to make a change to column-mounted automatic gear selectors.

The Chrysler models have always been at or near the top of the of the totem pole at Mother Mopar, so Wayne’s ’64 has plenty of upscale features like power steering and power brakes. Wayne made sure all the car’s mechanical components were in tip top shape, plus he added a dual master cylinder for safety reasons. However, he retained the car’s four-drum brake system on the convertible.