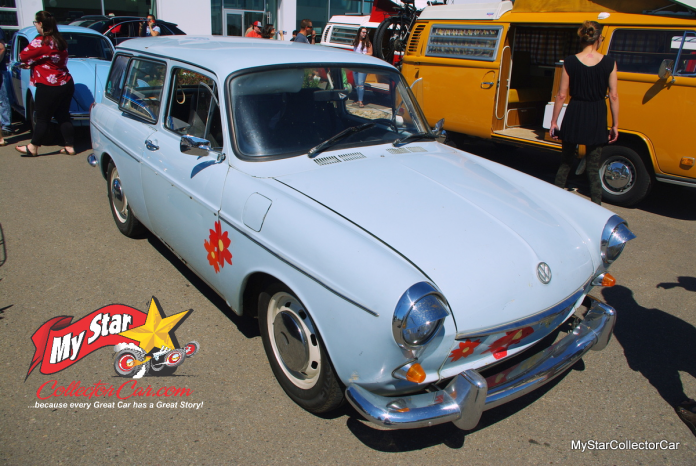 Ryan McLean was a vintage Volkswagen fan for most of his life.

Ryan may have been heavily influenced by the movie star Bug, but he chose his own path as a young adult car guy when he bought a 1969 Volkswagen Type 3 Squareback station wagon about five years ago.

Ryan told MyStarCollectorCar his choice was based upon the notion that “Everyone has a Bug or Bus”, in his words, so he chose the Type 3 VW. His ’69 wagon even had the right color for Ryan.

The Type 3 VW was introduced to the market in 1961 and ceased production in 1973 with about 860,000 built for worldwide sale. The Type 3 offered an abundance of features not found in the Beetle and its square body style was a radical departure from the rounded lines of its VW relative (the Bug).

Ryan was correct because his ’69 VW wagon creates a stir whenever he drives it on the street-and even to VW meets. He has become a well-informed expert when it comes to the vintage VW hobby, particularly as it applies to the Type 3 models.

Ryan joked about his “enormous capacity for useless information”, but he is the go-to guy for other vintage VW owners who rely upon his knowledge to help keep their cars on the road.

His ’69 Type 3 was not even running when Ryan found it, but he was able to clean the fuel delivery system and fired up the car before he moved onto its other issues.

Ryan was able to solve the wiring problems in his VW and added a few of his own touches to the car, including chrome headlight eyelids and amber signal lights that were not available in North America in 1969.

The rear-mounted engine in the Type 3 was configured differently than a Beetle’s and its design allowed more room for storage in the vintage VW wagon. Ryan’s Type 3 was equipped with an automatic transmission and its engine was originally fuel-injected, according to him.

The fuel injection system worked well, but a lack of replacement parts prompted many owners to switch from fuel injection to a carb, in Ryan’s opinion. The engine is now 1680 cc because it has oversized pistons that deliver more horsepower into the VW’s power equation.

MyStarCollectorCar encountered Ryan and his VW Type 3 station wagon at a car show about an hour and a half from his home. He chose to drive the 51-year-old VW on a congested 4-lane highway and was happy to report his Type 3 was able to hit 120 km/h (about 72 mph)-“and not downhill”– in his words during the trip.

That kind of speed will help Ryan outrun Herbie the Love Bug on the street.

His unusual classic VW station wagon has already outrun Herbie in his heart.