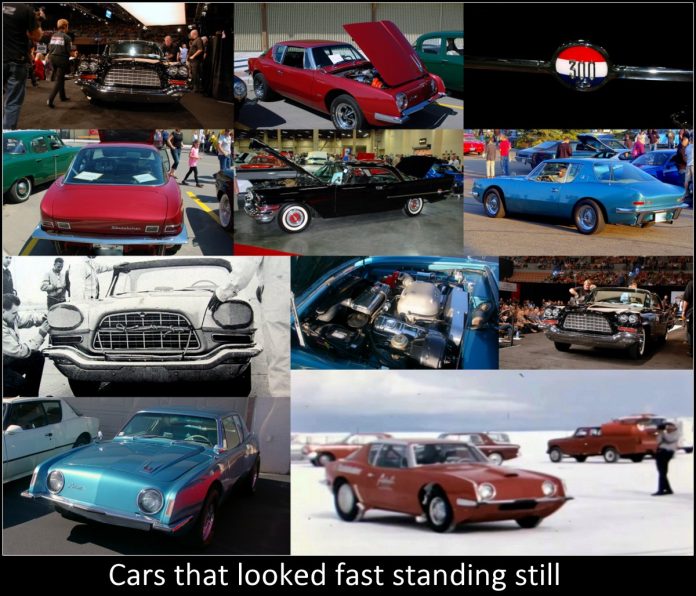 The bygone era in car design yielded some unique styles during the heyday of domestic cars from the past.

Creativity was the driving factor because most domestic car builders wanted their vehicles to stand out in a crowd in the design department.

The result was a stunning lineup of vehicles that blazed their own paths in terms of style, a factor that has always fueled massive car guy interest in retro rides. Many of the retro vehicles looked fast at a standstill in our opinion here at MyStarCollectorCar, so we decided to create a list of our choices for vintage cars that looked like they were doing a hundred miles an hour while still in neutral.

The Fabulous Fifties was an automotive era with many examples of cars that looked fast in park mode, a fact that was largely due to the massive fins on vehicles built during the latter part of that decade.

However, the major reason for including the 300 letter cars on our fast-looking list is the car’s design. Mopar went all-in for fins during the latter part of the 1950s, but the car company may have designed the perfect tail fin package for the 1957-8 Chrysler 300 letter cars in a two-door hardtop configuration.

The rear fins on the car looked ready for takeoff, while the front end of the ’58 Chrysler 300D contoured like the fuselage of a jet to enhance the road rocket’s tailfins. Maybe that is why one of these finned wonders were clocked at over 156 mph on Bonneville Salt flats in 1958. But they also looked fast at a standstill.

Another solid addition to our looks-fast-while-parked list is the 1963 Studebaker Avanti. Studebaker was well-known for its ability to build cars on a limited budget, most of which could easily fit on a bland list (see Lark models), but the Avanti was radically different from the company’s plain Jane approach-except for their Hawk models.

The Avanti was essentially a “halo car” (limited production showcase car) designed to compete directly against the Corvette. The ultra-sleek Avanti was Studebaker’s statement car and it practically shouted, “We may be a small company, but we can run with the big dogs anytime and anywhere with our Avanti”.

The 1963 Avanti was also able to back up its fast-looking style with stunning performance that topped out at over 178 MPH in its supercharged models. The car’s futuristic aerodynamic design was likely decades ahead of the competition and lent itself to the Avanti’s incredible performance.

The cars have become the stuff of automotive legends over the decades and command huge dollars in their original form. The Avanti was built by Studebaker for only two years, but it has spawned a sizable tribute car industry over the ensuing decades because of the Avanti’s innovative and ageless go-fast design backed up by insane performance.