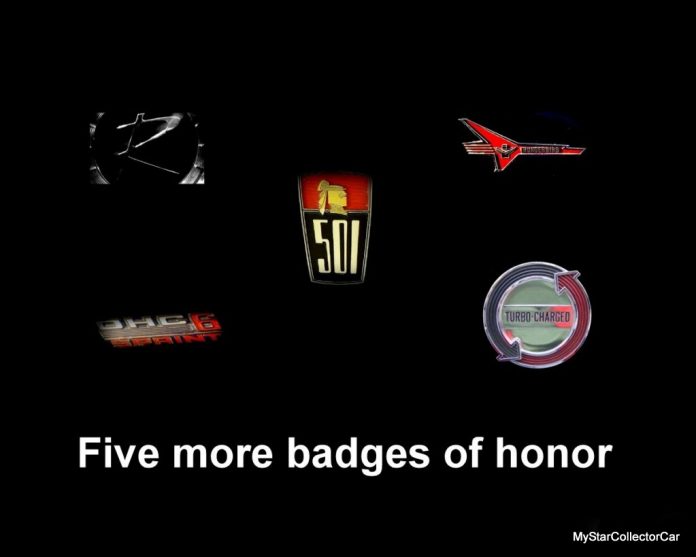 Badges of honor are the trim pieces on cars that told would-be competitors something lurked under your hood–and it wasn’t a six-cylinder with a 1-barrel carburetor.

These badges of honor were found on very familiar cars, but there were other cars with badges that flew under the radar–here are five examples.

The first example is the 1956 Ford Fairlane. Ford Fairlanes were the kind of cars you’d see on streets of suburbia back in the mid-50s and they were family haulers–not street brawlers.

The ‘56 Fairlanes may have been tame–until a buyer checked off the Thunderbird V-8 option. The Thunderbird V-8 badge meant you could take that mild-mannered sedan to another level with a 292 or 312 cubic inch beast under the hood. The suburbs became a lot more interesting for Fairlane guys.

The 1957 Dodge D-501 badge was another unsung hero on the streets of the 1950s. The Custom Royal was at the top of the food chain at Dodge, but the lesser-known 501 option was the real beast.

The D-501 badge meant you had a 354 cubic inch hemi at your disposal–this was an extremely rare option, and it was outlawed in a few months. The D-501 Dodges would have been the biggest ambush ever seen on the street back in ’57 because nobody saw them coming.

The 1957 Rambler Rebel was another stealth bomber with a badge. They only came in four-door hardtop form, and they packed a fuel-injected 327 V-8 under the hood.

This little-known AMC muscle car was an unsung street brawler until a 4-barrel carb version of the ‘57 Rebel became the fastest sedan in North America after it dominated 1957 0-60 mph trials.

Corvairs were dogged by the Ralph Nader crusade against them, so it’s hard to imagine why Chevy wanted to add speed to a car Nader deemed ‘Unsafe at Any Speed’.

Nader’s book attracted media attention, but Chevrolet countered by adding a turbocharged option to its Corsa lineup in ’65 and ‘66. The ’66 Corsa Turbo was 180 horsepower in a very light car, so these little Chevys were highly competitive in the North American compact field on the street and at the track–with all due respect to Mr. Nader.

The fifth and final badge of honor belongs to the 1967 LeMans/Firebird OHC Sprint. In 1967, the Pontiac GTO was the big Poncho on the block but the ’67 OHC Sprint had a different look.

The OHC Sprint option was a cutting-edge, six-cylinder, overhead cam, 230 cubic inch, 215-horsepower mini beast. It came out when 60s muscle was in full bloom, so it wasn’t the first (or second) choice for Firebird buyers, but its light weight was appealing to buyers who liked a mix of power and handling.

JUNE 2020 ROAD WARRIORS – THE TRANSITION TO SUMMER FROM SPRING...