This was found in a 1969 Hot Rod magazine. The most unique facet of this automotive trip down Memory Lane is the severely pragmatic philosophy at the time.

The emphasis was on practical and affordable solutions to mechanical problems-not brand loyalty.

The owner had a horsepower problem with his camper-hauling 1964 Ford F-100 pickup. The 292 V-8 mated to a 3 speed transmission was a factory-built power failure.

Simply stated, in 1969 parlance-it was “too gutless” so the plucky Ford was overmatched by any hill beyond a gently sloped driveway.

The answer was found in a local wrecking yard via a salvaged 1967 Dodge Coronet 383 motor.

He swapped out the tepid Ford motor for the bigger Mopar power train with only a few modifications like a 58 Cadillac radiator, Ford alternator and Chrysler 413 exhaust manifolds-he even kept the factory Ford AC and blended the Ford solenoid with the Chrysler starter.

He did this in 12 days and took the truck on a heavily loaded trip with 3 people and 2 motorcycles with no problems and only a .5 MPG dip in gas mileage. The truck handled every assignment with more power than the Incredible Hulk. His only regret was that he didn’t do it sooner.

You’d never see that in 2011. That would be like yanking a V-6 out of a 2006 Ford truck and replacing it with a 2009 5.7 Dodge Hemi. The cost would be the equivalent of Costa Rica’s GDP, the electrical and mechanical complications would be enormous and every time you met a Ford guy you’d be ducking punches. 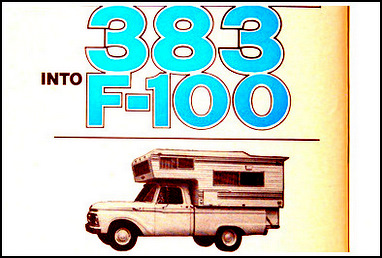 ROBERT:”I don’t have a problem with a man swapping any motor or parts into his own property and if someone doesn’t like it TUFF SH*T excuse my French. (I love that one) how in the world did the French get that one hung on them? Life was sooo much easier and simple then. I just wish I would have known it back then”.