Debra Stoski was a typical teenager back in the 70s because her first car gave her the freedom and independence that comes with a new license and a new ride.

This was an era when you didn’t look at a new Honda Civic as a viable option for a kid’s first car-this was era when an affordable car like a mild mannered and gently used 4-door sedan.

She explained the history and significance of this car, “I was a lucky girl when my father purchased a 1955 Plymouth two tone green car for me. I was 17 and ready to hit the road. This car was not only special because it was my first car – it was beautiful because the previous owner was meticulous about how he kept it in such excellent condition. He had placed masking tape on the column and dash so the keys wouldn’t scratch it. The back seat had never been sat on. It was unique being an automatic with the stick shift on the dash of the car”.

“The only thing I didn’t like about it was in 1955 they didn’t really know how to heat a car so with our terrible winters it would take forever to defrost the windshield or feel some heat. Other than that it was awesome”.

Debra carried a camera back then so the car was well documented, “This was taken at the Innisfail Esso Station that had a two bay car wash”. 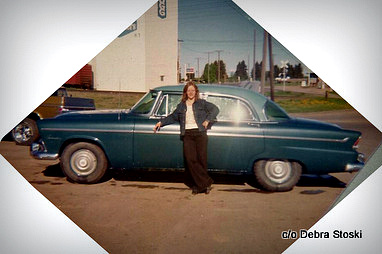 The car wash was significant in other ways, “I learned very quickly that if you polished and washed your car, the guys paid attention. They even trusted me with their rides – so teenage life was terrific”.

Adolescence is a hot bed of insecurity and Debra recalled one incident where the car highlighted this facet of teenaged life, “MY CAR WAS AN EGO CRUSHER! – why you ask – well I was traveling out to Sylvan Lake to hang out at the beach with my friends. It was a hot, perfect summer day to be at the beach so I was ready to take in the rays and only wore my bright orange florescent bikini – as I drove slow down Sylvan Lake Drive about 20 bikers started riding in front, beside and behind my car.

This really made me nervous so I pulled into a parking stall hoping they would go away. What was a girl to do all alone and not really dressed so to speak. They followed me and still circled my car – I thought “omg” what I am going to do, I only have this bikini on and I am not sure where my friends are. I rolled down the window and asked what they wanted. I found out very quickly they were not interested in me at all they just wanted to know about my ride. The guys could care less what I was wearing, or even who I was – they just wanted to know about my car – they thought it was awesome. So much for my ego…”

Very few people keep their first car but the lifetime memory never leaves. Sometimes the memory is painful as Debra admitted , “THE BIG MISTAKE- HUGE!!! If only I had had a crystal ball in those days I would have kept this Plymouth, however I really was disappointed in the heating system of the car – I guess I am just a little impatient so I traded my 1955 Plymouth straight across for this Camaro…I should have got my brothers to give me advice however I didn’t and I ended up with a car that was in bad need of a motor”.

Clearly, in the end, the first car is more of a basic life lesson in the perils of adolescent, impulsive behavior as Debra recalled, “I have learned through my mistakes over the years but at least I have a lot of good memories with my Plymouth – going to the Movie “American Graffiti” at the 40th Avenue drive-in with the right car and playing the right music with a cassette player that plugged into my lighter, traveling through BC, and hanging out at the car wash with all the guys and my car. It was great!”.

Despite her seller’s remorse on the ‘55 Plymouth, Debra never lost her love of all things automotive.

She’s still involved in the car game at Innisfail Tire & Lube where she gets to tell her customers about her long lost automotive first love.