My high water mark for fastest ride is 165 mph, according to the speedometer.

‘165 mph is not huge speed by today’s standards, but my speed record took place on a city street when I was nineteen. The driver felt that his speedometer was out a few mph.’

To me, it felt like I was standing on the outer wing of the Starship Enterprise- at maximum warp.

The driver of the car is still a buddy of mine, so I will refrain from naming names, even though he was not worried about the prospect. We were nineteen years old at the time, and my buddy had one of the fastest cars in town. Town was about 30,000 people at that time, but we came from an area of serious car guys with a Tim Taylor “more power” obsession.

The car was a barely street legal ’29 Chevy 2 dr. coupe with an ultra-tricked out Ford small block in it. This was a thinly disguised ¼ mile rocket with headlights and taillights. The important lights were the taillights, because those were the only ones that anybody in town was going to see on this rod.

I never actually drove this car. My adventures took place in the passenger seat where I tried to ignore the immutable laws of G-force physics that slammed me back into the seat every time my buddy shifted towards the speed of light.

It was always a mix of fear and exhilaration every time he put that old rod through the paces. I remember brief uncertain thoughts about the strength of a cab with wooden components whereas later cars had a metal fortress around the occupants.

I remember the sound of hurricane force winds that invaded the cab of that street monster every time my buddy put it through the paces. There was no mistaken belief of serenity that one gets in modern vehicles at high speeds, where outside noise is completely muted by state of the art materials.

The old Chevy was noisy inside and out, and it seemed appropriate that an old school 20s style car protested so loudly when it was pushed so far past its designed maximum speed. An unholy alliance between an antique car and brute force is a complicated relationship in an otherworldly sense.

We loved the sensations and feared little about the consequences in that car. My buddy was a pretty fair stunt driver and we were only nineteen, so we wanted everything in massive excess-including crazy speeds in a car designed for a third of the velocity.

That night we were out on the street in the young hours of the next day. We had just come from a wedding dance ( my buddy had wrangled us in) earlier in the evening. He was an A-lister with the women, so we got a free pass to the party.

An excessive amount of booze was always in the cards at that age. Eventually my buddy wanted to test his car on the street with any takers. Traffic was very thin, with the exception of an early 70s SS 454 with a few mods of its own. Unfortunately its owner was in no mood to race against my buddy’s ’29. It would have been a one-sided massacre. 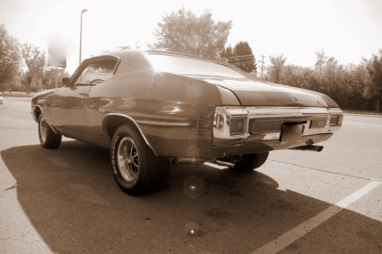 My buddy was frustrated because he really wanted to bury the Chevelle. So he did an impromptu solo run at the bottom of the South Hill in my town (pedal to the metal –no lifting action). It was terrifying to watch the street lights flash by in an almost solid blur like that, but I was too scared to even talk at that point.

Our attempt to stop for the traffic light a few blocks from the crest of the hill was laughable at best but finally, a block and change past the light, we managed to slow down. Obviously we survived the experience, but I will never forget the insanity of that one ride. We had an opportunity to become dead young teenaged crash legends and failed the test.

I will always be grateful for that stroke of good luck over a very bad decision.