Just about every car guy had a phase in their lives where car models were a big- ticket item. Just to clarify, we mean actual scale model cars as opposed to real life models at car shows.

The easiest way to tell them apart is the cars had less plastic components but here’s a model from the past that every car kid wanted in 1971.

The November 1971 issue of Hot Rod magazine had a scale model version of a rail called Super Digger that was a pretty impressive toy at the time. It had engine sounds, wheelie potential, slicks that spun, and a chute that popped behind it. 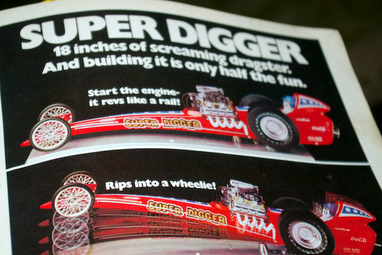 Clearly this was undoubtedly the stuff of dreams for a junior car guy in 1971. What kid would question the existence of Santa Claus if he found this baby under the Christmas tree?

Models like the Super Digger provided a simple build for a kid that may have decided to build a real track monster later in life. Models gave an early feeling of accomplishment for a junior car guy and may have lit the spark for the real thing.

The caption with the ad read; “If it were any more real, you’d need a crash helmet”. In 1971, that was truth in advertising. 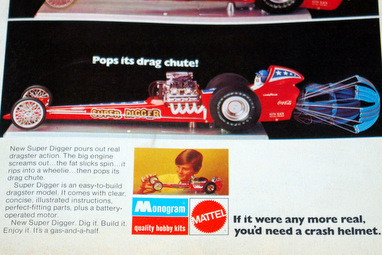 I would like to thank Monogram, Revell, MPC and my personal favorite AMT, for all of the plastic models they built for an eager army of junior car guys back in the day. Car guys owe them a huge debt of gratitude for their products.

So we salute the model car industry with a look at a 1971 classic from the pages of Hot Rod magazine.

Many more car stories at  https://www.mystarcollectorcar.com/