Andy Granatelli was a controversial automotive figure in the late 60s. He challenged the conventional internal combustion engine philosophy in racing with his turbine engine Indy car.

The turbine cars were almost silent on a racetrack, except for the whoosh sound from moving air when the cars moved around the pavement with their competition left behind in their wakes.

USAC was the governing body for the Indianapolis 500, and they did not love the Granatelli turbine Indy cars. In fact, USAC hated his cars and attempted to drive Granatelli’s cars off the road by implementing air intake restrictions in 1968 to discourage Granatelli. 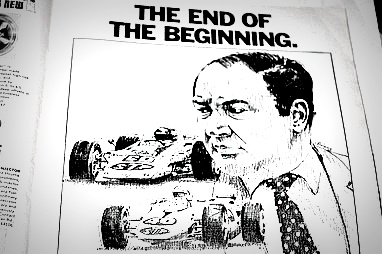 Instead he compensated for the power drop with a sleeker and lower car, and only a late race mechanical failure prevented an easy turbine victory in ’68.

USAC chose not to tempt fate after 1968 and told Granatelli to place his controversial racer in a region that does not get much sunshine. They likely meant a famous anatomical region but the turbine car was resurrected for the 1971 Formula One series.

And F-1 will race in the rain.

The F-1 car was largely non-competitive because of its weight problems, except on one wet track where it ran pretty well in practice, while a dry race day track cured its winning attitude.

Despite their short history, the turbine cars garnered a lot of attention for STP mogul Andy Granatelli. So much so that Handy Andy used the ill-fated Indy cars as part of his ad campaign in an April 1969 Hot Rod magazine.

It was a brilliant move in 1969, an era where “dare to be different” was a mantra and Granatelli the rebel cashed in on the anti-establishment movement to sell motor oil and fuel supplements.

More to see at – https://www.mystarcollectorcar.com/