DECEMBER 1 MSCC STAR OF THE WEEK: THE “240 GORDIE” BUBBLE UP FUNNY CAR

The MSCC Star of the Day is typically based on a celebration of the automotive world via a very cool picture of a classic ride.

The Star of the Week is always the best example of that seven-day period.

240 Gordie Bonin passed away on Friday but if you were searching for the definition of positive and life-affirming, look in the dictionary under “Gordie Bonin”.

Stay tuned for an MSCC tribute to Gordie later this week.

MSCC STAR OF THE DAY: THE REAL TEST FOR OLD IRON IS WINTER

The car show season officially ends when the snow flies. That’s a reality in life because most guys have half the national debt invested in their classics.

Essentially this means you don’t expose your baby to the ravages of winter weather and the skating rink, salt-laden roads of the most merciless season the calendar.

This MSCC Star of the Day Ford truck is the exception to the rule because it was out on the road a few days ago.

More impressively it was carrying a load.

NOVEMBER 29 MSCC STAR OF THE DAY: COE COOL-THIS IS WHY THEY’RE SO POPULAR 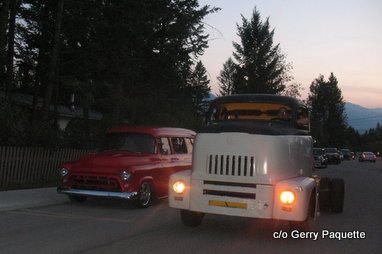 COE trucks have been hotter than Microsoft stock back in the late eighties.

They appeal to gearheads on a gut level because they start out cool and you can literally do anything to them and they come out even cooler.

You can put monster big blocks in these brutes and actually pick the location because you can fit them up front (COE) or plunk it mid-ship.

This MSCC Star of the Day COE was at a show back in September 2012 and it clearly oozed cool.

NOVEMBER 28 MSCC STAR OF THE DAY: NOVA GASSER-YUP, YOU CNA DRIVE THEM ON THE STREET

Gassers aren’t the most street-friendly vehicles because they were originally built for short, straight and incredibly fast runs at the track.

Nevertheless, you will see the occasional gasser tribute car in traffic.

This Nova gasser was on the street back in early August 2012 and it was off the chart cool in a world of bland but practical cars.

Gassers might not corner like a Ferrari but they’re an easy pick for MSCC Star of the Day when they’re in traffic.

Ford had a better idea back in late 1968 when they kicked off the ’69 lineup with that famous advertising slogan.

The truth is Ford had a better idea from 1953 to 1956 when they built some of the coolest trucks ever built in Detroit.

History shows that these iconic pickups became legends in the hands of custom builders because they lent themselves to modifications like giant engines and mild mods.

This Star of the Day classic Ford pickup was at a gathering back in September 2012 where it was a guest of honor. 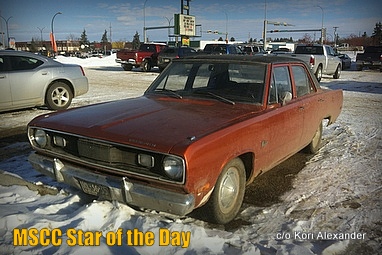 Most people think of massive horsepower and brute force when the conversation turns to 1970s Mopars.

Anything sentence with the words six-pack, six-barrel, hemi-heads or two four-barrels will typically begin or end with the word Mopar.

That’s the legend but the reality is most people drove Plymouths and Dodges because they were affordable, reliable cars that ran forever.

They drove cars like this ’72 Valiant for years because you couldn’t kill the slant-six or the LA 318 under the hood and the Torqueflite was bulletproof.

That tank-like dependability explains why this MSCC Star of the Day is still on the road 41 years later. 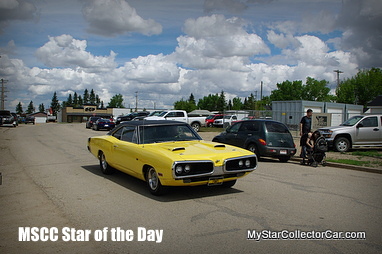 The 1960s were an automotive fistfight after the displacement wars in the early to mid 60s.

There was no replacement for displacement so when the 409 became the reigning champ Mopar followed up with the 413/426 wedge.

Ford set the bar higher with the 427 so Chrysler countered with the brutish 426 Hemi. Chevy answered back with their 427.

Nevertheless there was still affordable muscle available in lower end cars like this ’70 Dodge Super Bee. You could still get the tricked-out 383 in these babies and they were still entry-level Mopar rides.