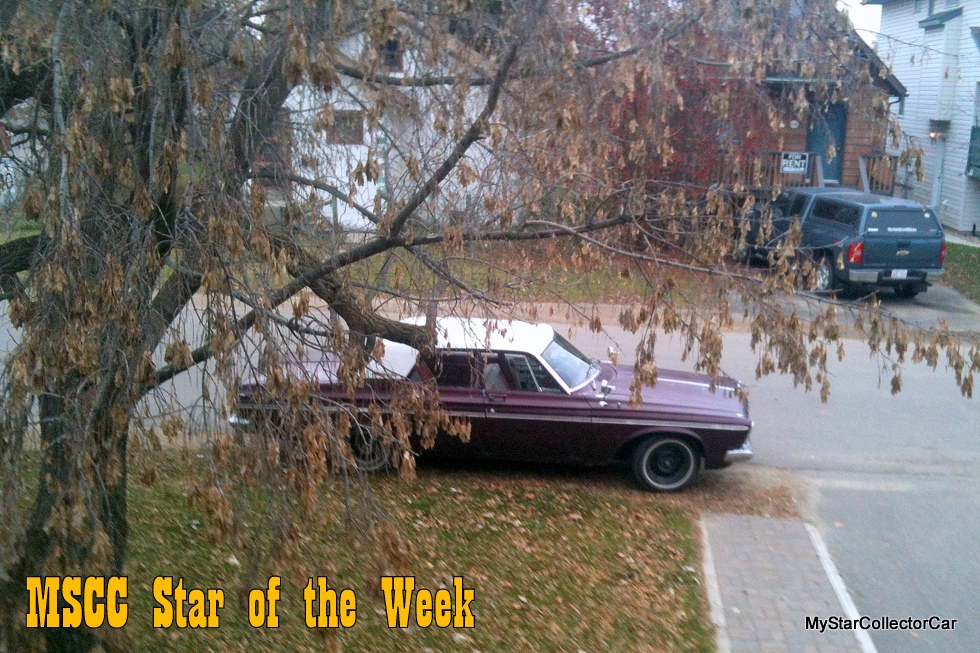 MSCC NOVEMBER 15 STAR OF THE WEEK: ’63 PLYMOUTH BELVEDERE—THE HUMBLE 4-DOOR SEDAN HAS ITS OWN COOL FACTOR

There’s not a lot of love in the world for four-door sedans.

There’s no well-defined reason for this attitude but most likely “cool factor” is behind this attitude because every kid in the world wanted his dad to drive a two-door hardtop instead of a blandly functional 4-door sedan.

Despite the negative press the MSCC Star of the Week is this ’63 Plymouth Belvedere 4-door sedan because these unloved rides have their own brand of cool. 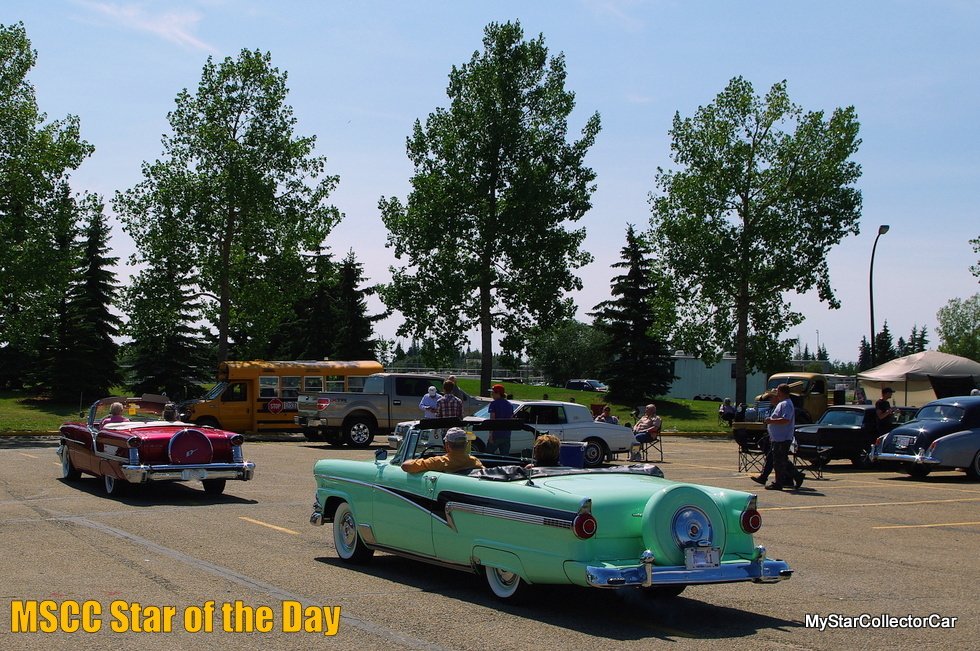 MSCC NOVEMBER 14 STAR OF THE DAY: ASK YOURSELF THIS—IS THERE ANYTHING COOLER THAN A 50S CONVERTIBLE?

Convertibles peaked about 5 decades ago in the 1960s but the concept faded away for a variety of reasons.

‘Safety standards were the biggest culprit but practicality became another nail in the coffin for ‘verts because people became addicted to more comfort, more air conditioning and less wind-blown hair.’

In short, we became soft so the large 70s convertibles were the last version of the genre.

These two classics from a show last August are serious MSCC Star of the Day contenders because is there anything cooler than a 50s convertible? 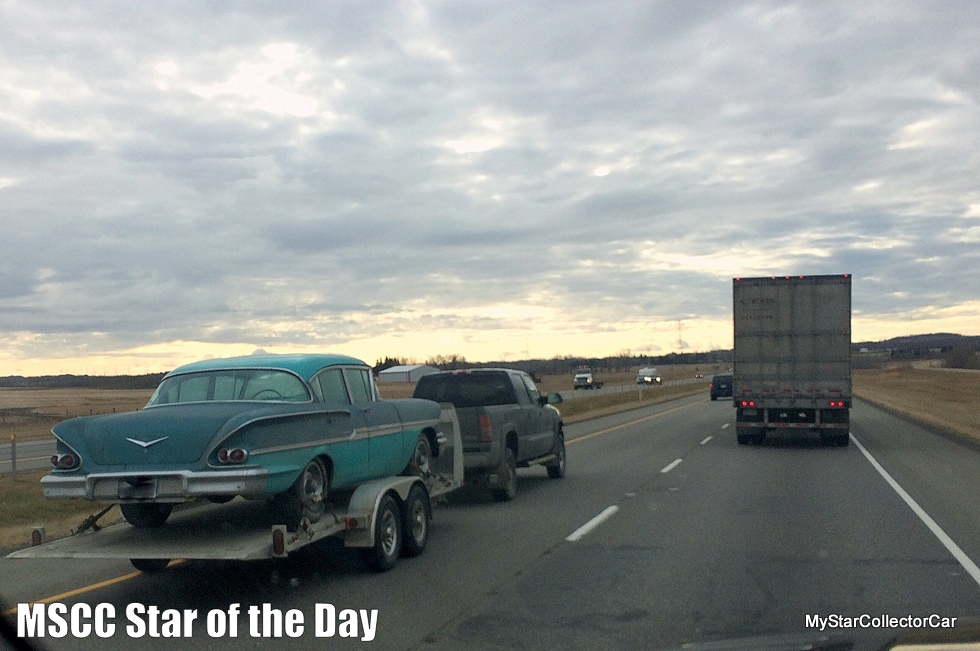 MSCC NOVEMBER 13 STAR OF THE DAY: A SURE SIGN OF WINTER—‘58 CHEVY ON THE MOVE

There are two ways to beat winter.

One way is to book a flight to Sydney, Australia to catch the Southern Hemisphere’s version of summer.

‘A more realistic solution is to pick up a car project and get it into your garage before the snow flies.’

This MSCC Star of the Day ’58 Chevy project on the move yesterday is a sure sign of winter and even better—it’s a practical way to beat winter. 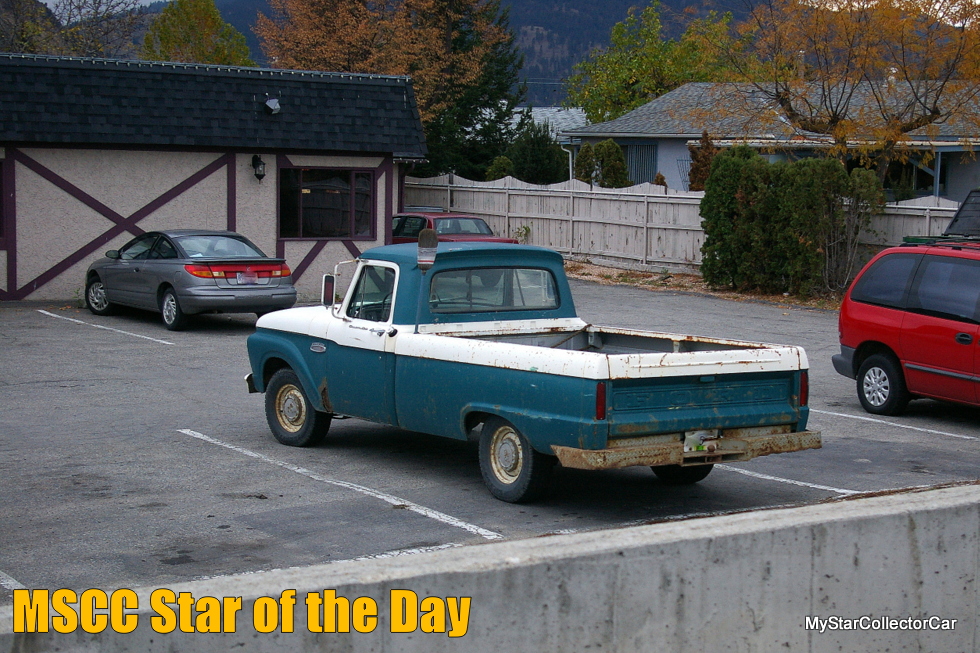 MSCC NOVEMBER 12 STAR OF THE DAY: VINTAGE FORD TRUCK—THIS IS WHAT A REAL WORKING TRUCK LOOKS LIKE

Today’s trucks are massive and powerful but are they real trucks?

‘Unlike today, trucks used to ride like buckboards with a broken wheel because they were built for work, not comfort.’

Air conditioning in an old truck  was an open window and an AM radio was a frivolous option you didn’t tick off on the order sheet.

This MSCC Star of the Day vintage Ford truck-broom and all (spotted back in November 2010)-is what a real working truck looks like. 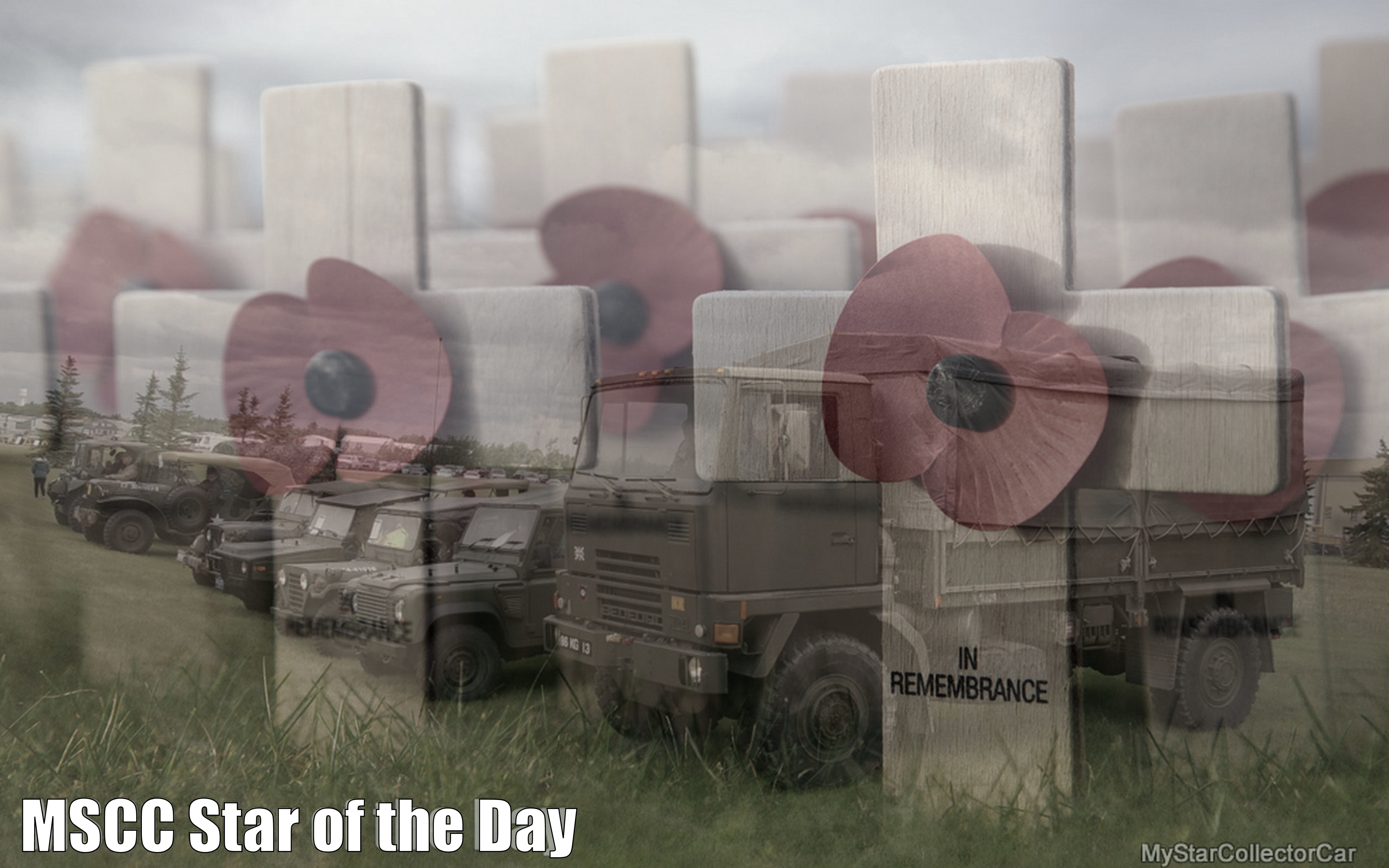 MSCC NOVEMBER 11 STAR OF THE DAY: THEY’RE CLASSICS BUT THE STORY BEHIND THE RIDE IS MUCH BIGGER

MyStarCollectorCar was founded on a simple theme—the story behind the ride.

You can have a row of Ferraris at a car show but the best story will be found in a humble old station wagon because the story behind the car is always more important than the car itself.

That old wagon took a family to every major event in their lives before it retired and that’s the reason it’s more important than a row of Ferraris with very thin links to the owners.

‘The MSCC Star of the Day is a row of vintage military vehicles because even though they are really unique pieces of history from different armies and different eras, the real story on November 11th is found in the soldiers drove these machines.’ 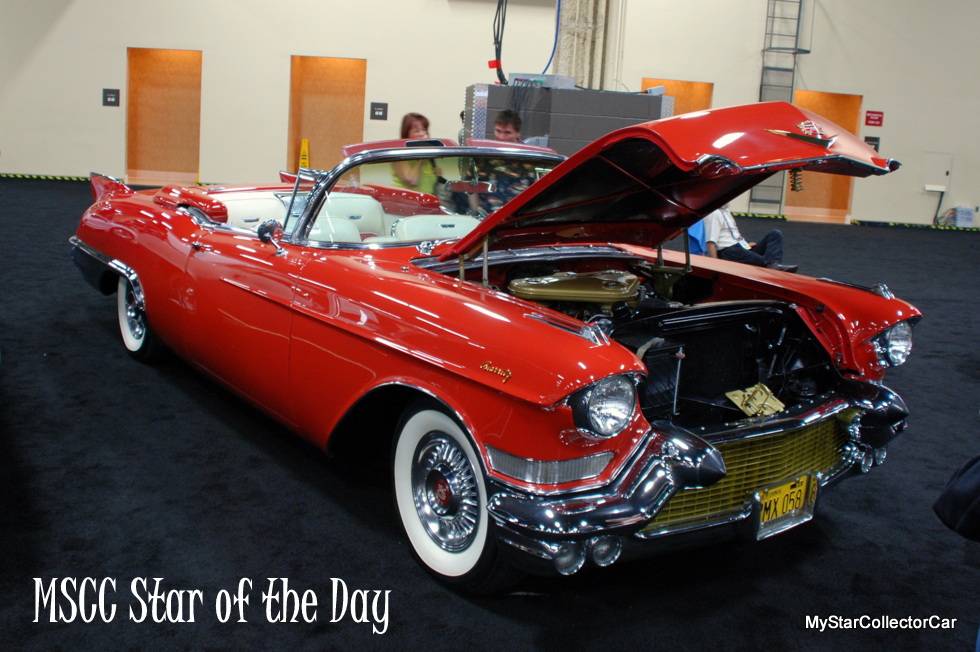 The mid-1950s was a turning point for Detroit because the game had changed to form over function.
Cars reflected this new reality because fins got bigger and the Big Three draped chrome and stainless trim over every inch of their cars.

There may have been a ‘Space Race’ between the US and the USSR but the real fistfight was on the ground for the hearts and minds of car buyers.

This MSCC Star of the Day ’57 Cadillac Eldorado Biarritz was at the top rung in the battle for buyers—it oozes class. 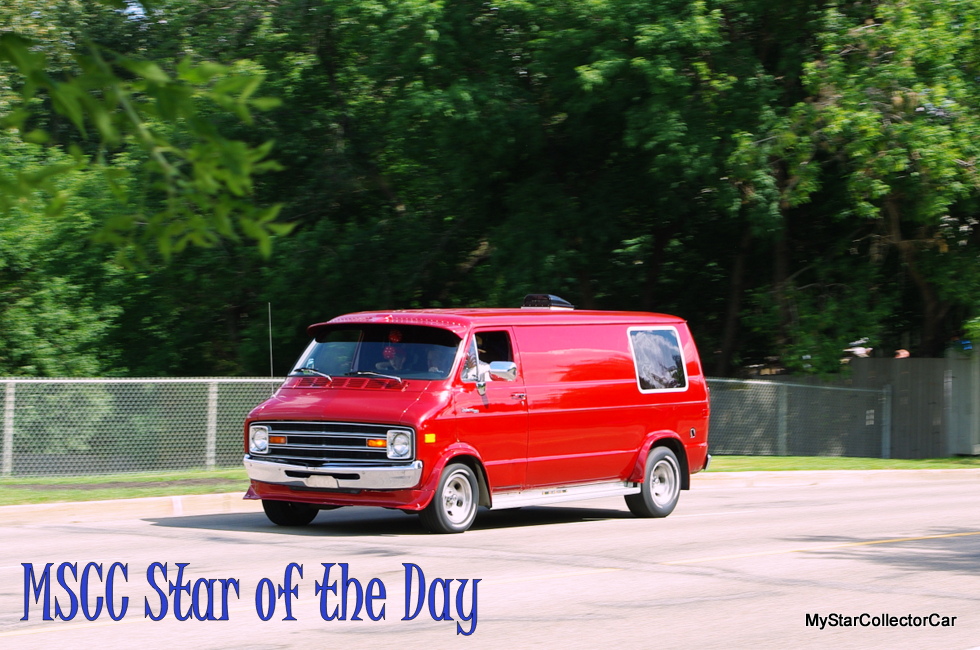 MSCC NOVEMBER 9 STAR OF THE DAY: DODGE BOOGIE VAN—THIS IS WHY THE 70S WERE SO MUCH FUN

Gas prices may have killed the boogie van but these rides still have a warm spot for anyone who grew up in the 70s.

They were the perfect form of transportation in the Me Decade because the 1970s were hardcore party years.

‘You could roll into a campground, unload a keg and live at Ground Zero for the party all weekend because these vans were self-contained dens of sin for their owners-it was Nirvana for 70s dudes.’

This MSCC Star of the Day Dodge Boogie Van is why the 70s were so much fun.

OCTOBER 23 FIVE FOR FRIDAY: FIVE ENGINES THAT ARE FAR COOLER THAN A TESLA ELECTRIC MOTOR