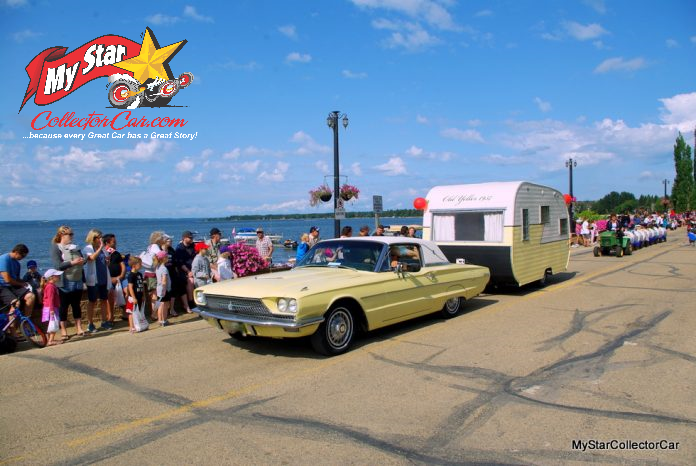 A 1966 Ford Thunderbird towing a vintage holiday trailer drew plenty of curious onlookers when it pulled into a car show at a lake resort.

The retro feel was palpable because the lake resort also had a nostalgic vibe to it.

Most older car guys who remember past automotive eras vividly recall the family car as the tow vehicle for summer vacations in a holiday trailer. They also remember the vintage trailer behind the family car.

Bob Gaetz recalls a time when he was 8 years old and his father bought a brand new 1957 Land Commander holiday trailer for their summer vacation. The recollection is likely a lot easier for Bob because he is now the owner of that very same trailer–the one behind his 1966 Ford Thunderbird Town Landau two-door coupe.

As mentioned, the T-Bird/trailer combination caused a sensation at the show because most onlookers had likely never seen a vintage car pulling an even more vintage trailer in the 21st century.

Bob was able to fill in the blanks on the combination. The trailer became a family fixture for summer vacations when he was a young guy before it was retired from active duty and subsequently spent many years in the bush before Bob rescued it about 30 years ago.

Bob used it as a family holiday trailer for about 10 years before it went back into retirement for the next few decades. Eventually Bob decided to resurrect the trailer and realized that he wanted to fulfill his own dream to buy a vintage 1966 Ford Thunderbird with enough power to pull his beloved trailer.

He bought a very well-preserved ’66 T-Bird in November, 2018 and decided to paint his trailer yellow to match the color on his Thunderbird.

The trailer was christened ‘Old Yeller’ by Bob’s wife because of its color and her attachment to the Walt Disney movie (‘Old Yeller’) that debuted the same year as the vintage holiday trailer.

The ’66 T-Bird is a fully loaded car with a 428 cubic inch factory big block under the hood so it has no difficulty pulling the 1957 holiday trailer. The T-Bird now has a load equalizer rear hitch to balance the weight of the trailer on the rear end of the 54-year-old tow car.

Bob told MyStarCollectorCar his T-Bird was originally a California car that was sold to a Canadian owner in 1984. The Thunderbird is in excellent condition and Bob believes it has never been stored outside during the past 54 years on either side of the border.

His T-Bird is indeed a full-load car with all of the creature comforts available to its typically upscale buyer in 1966. The stylish Landau roof was part of the package when customers bought one of these particular Thunderbird models.

The list includes AC, power steering, power brakes, power windows, along with a unique tilt-away steering column that allows ease of driver exit/entry into the Thunderbird. The stylish T-Bird even has a factory AM/FM radio; an audio option that was very unusual in 1966.

“The vintage car and trailer are both stars in the 21st century and the only question is which one is the bigger star whenever Bob takes the tandem on the road.”