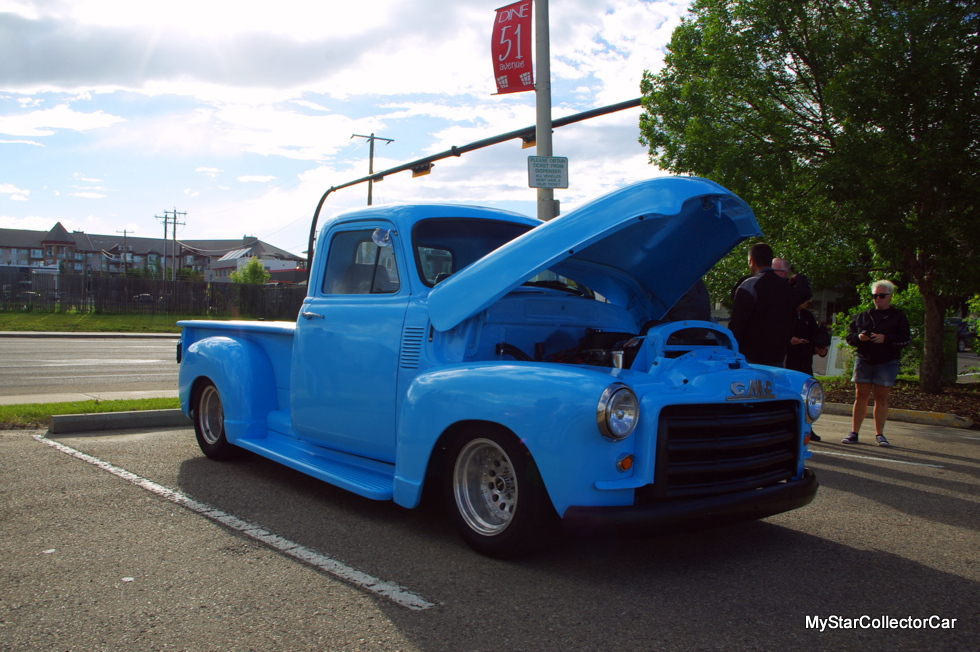 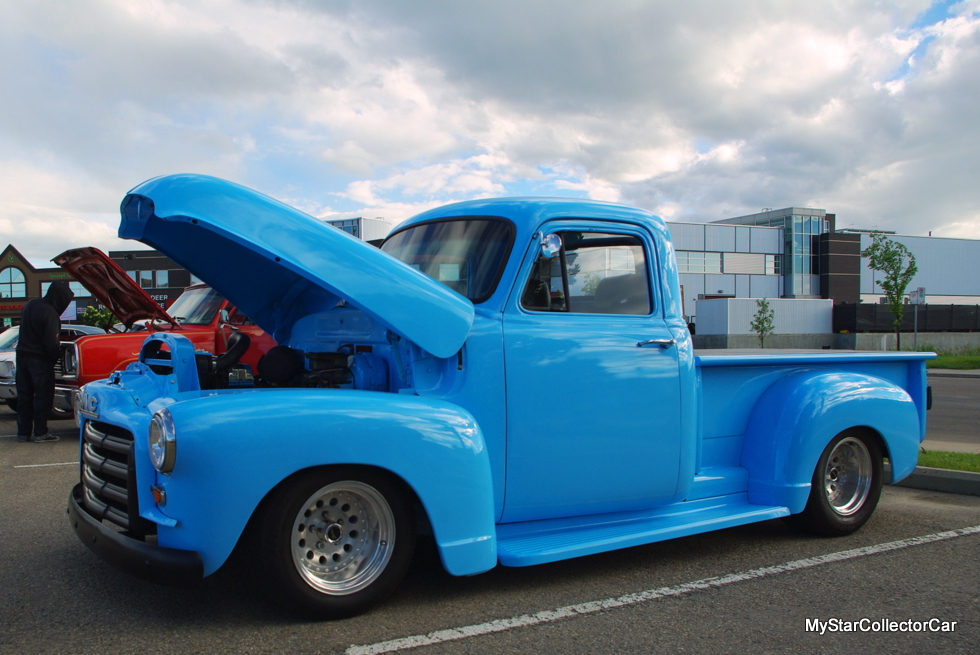 The 1954 GMC was a truck on the cusp of a major makeover because the 1955 Blue Chip series GMC pickups debuted in late ’55 with a brand new look and V-8 engine option.

The ’54 GMC represented the early 50s truck style in grand fashion and earned a place in the hearts of car guys because they offered so many possibilities as a resto mod project.

We spotted a 1954 GMC truck that stood out in a crowd for many reasons, including its cool blue paint scheme. 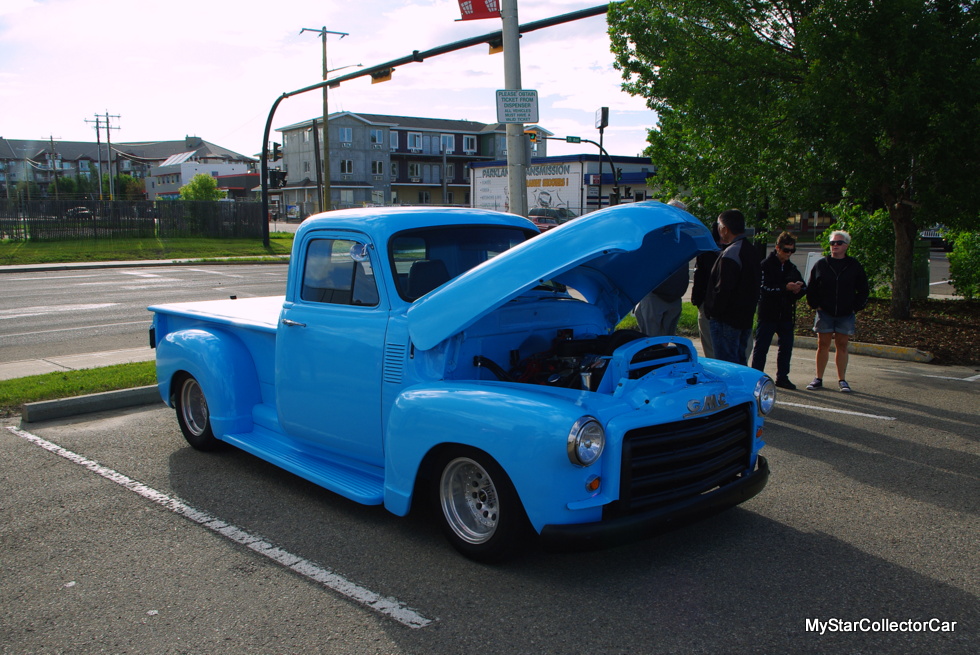 Owner Les Scott bought the truck after it had undergone a transformation from a mild-mannered workhorse into a fire-breathing stallion. 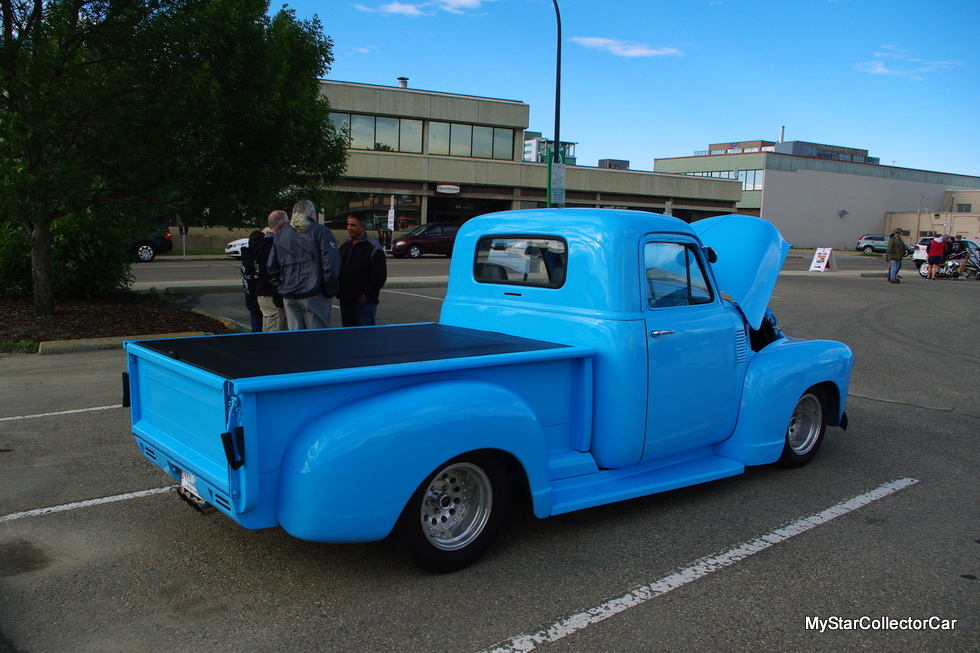 Les added his own touches to the GMC once he became its new owner and the truck made its debut in late spring 2017.

The biggest changes to the GMC began with its new foundation because the truck now rides on an S-10 frame and gives the GMC a modern truck base. 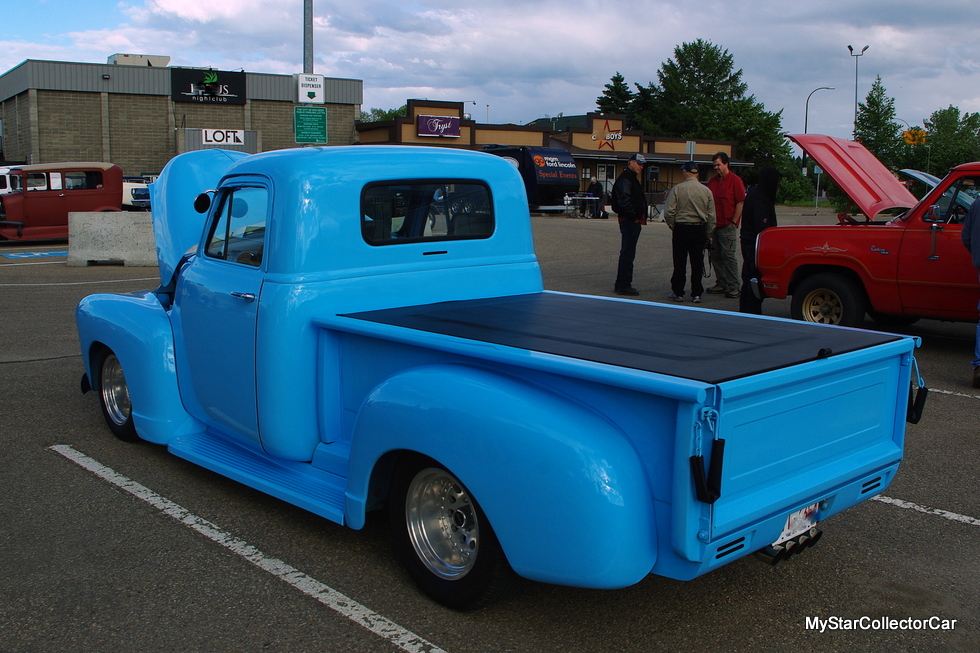 It also allowed a big horsepower upgrade from the GMC’s original straight six engine because the pickup now has a 350 Chevy fuel injected engine that is mated up to a 7R-400 4-speed automatic transmission. 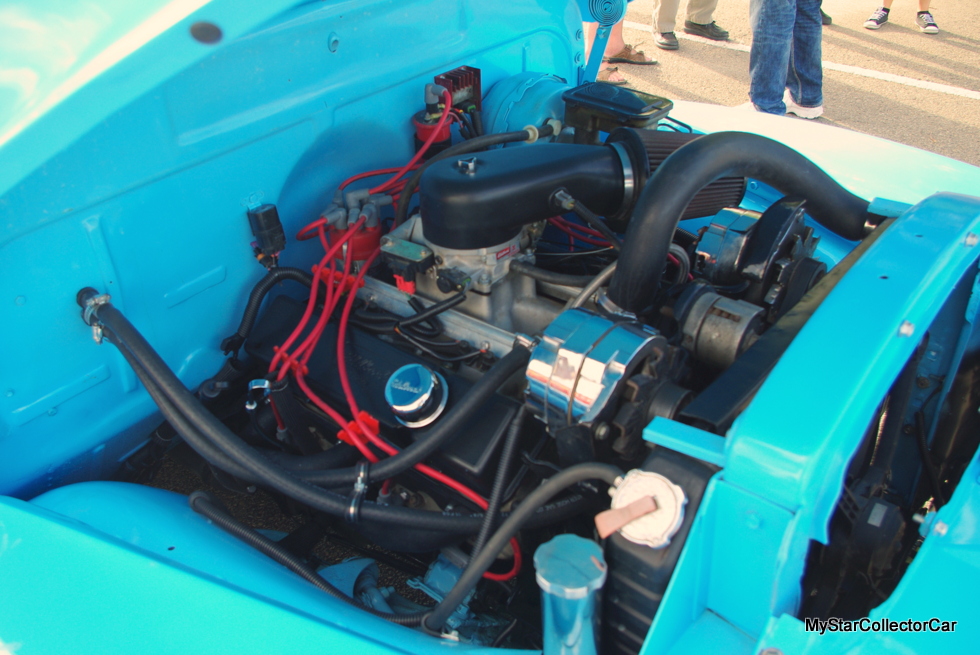 The 3:73 gears on the back end of the pickup give the GMC a tire-smoking combination with the small block Chevy under the hood, but Les will likely avoid too many trips to his local tire shop and is content just to know he can wear out rear tires. 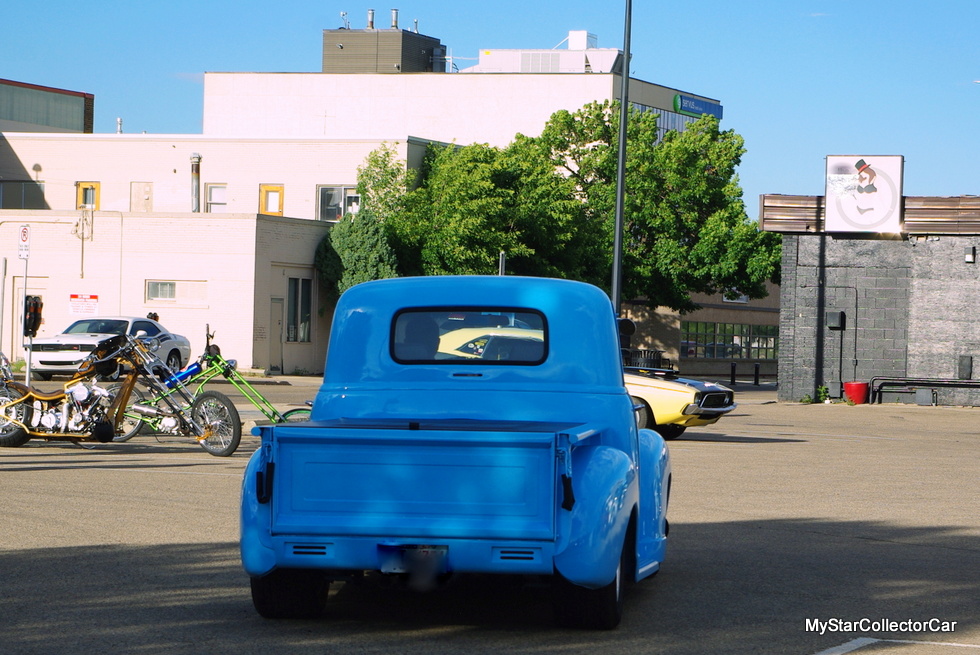 Les has built a couple of rides over the years but this time he wanted to find a truck that was well into the rebuild process and suited his tastes. He searched “forever for a suitable vehicle” in his words, until Les found the ’54 GMC. 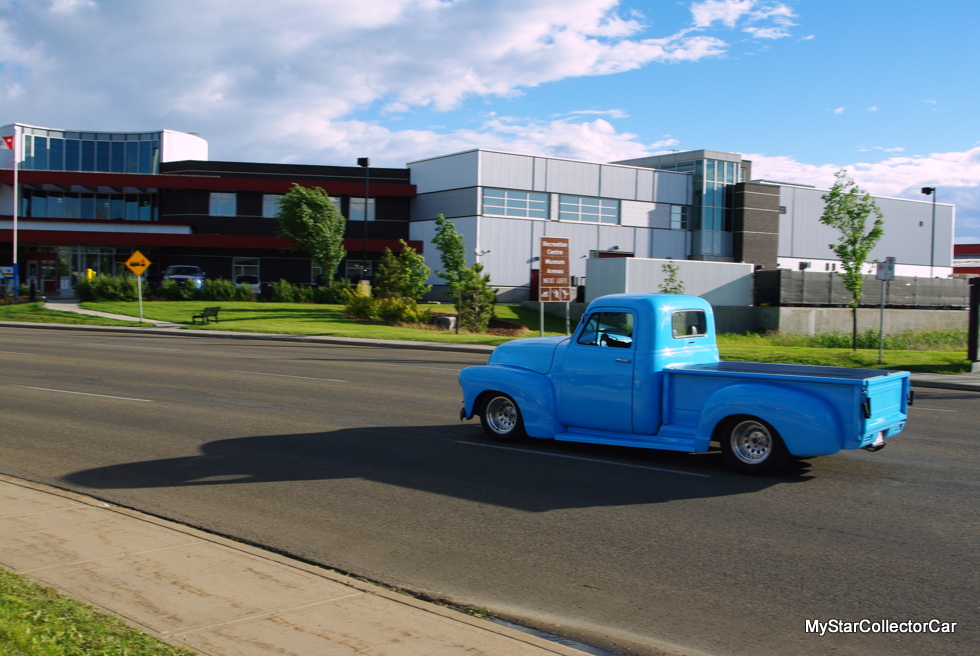 Les put a few more tweaks into the truck, including a custom-built instrument cluster that reads in kilometers because he lives in Canada, a country where metric measurements were introduced in the Seventies. 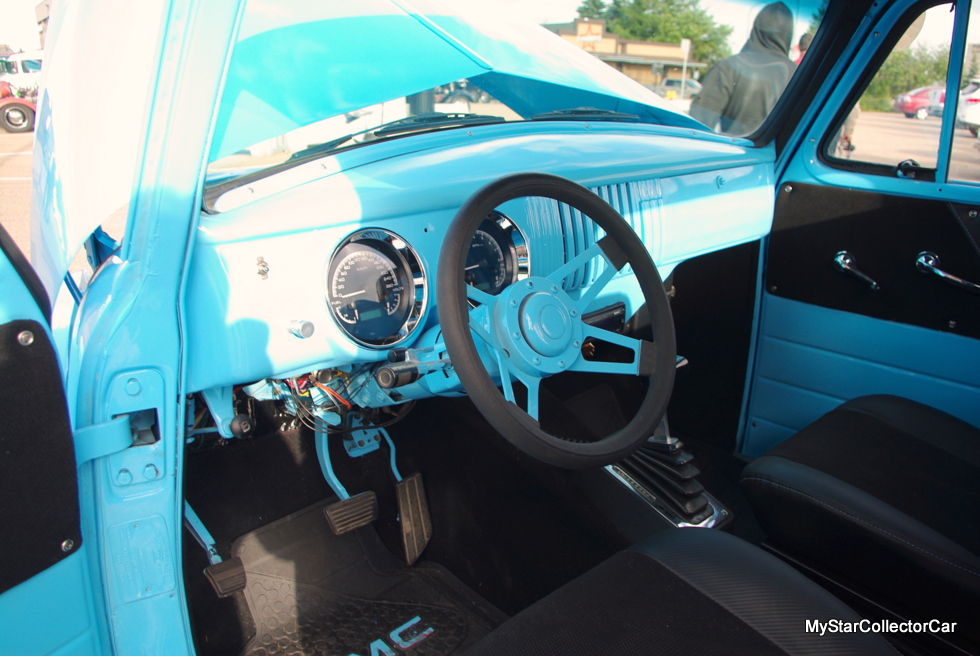 The truck has a few creature comforts that include modern seats and power steering. Les likes the way it drives down the road and looks forward to a few local road trips while he gets comfortable with his 63-year-old pickup truck. 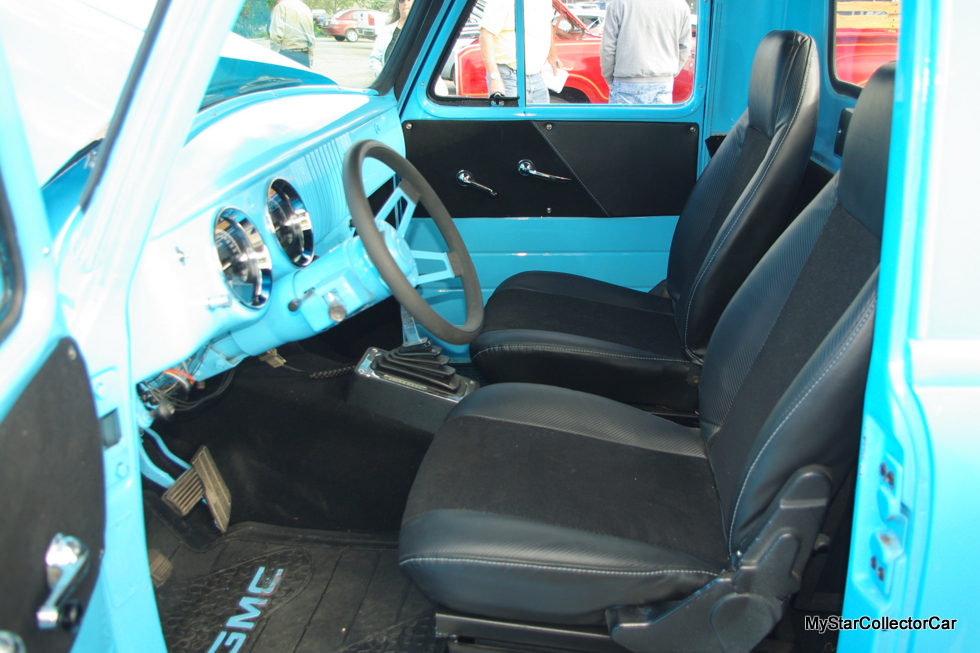 The GMC is free-breathing because of its custom headers that wrap around the steering column because of the tight quarters under the hood of the truck since it was not originally designed to house a V-8 engine.

The truck also stops much better with its S-10 front disc/rear drum brake system that will slow down all those horses under the hood in a big hurry. 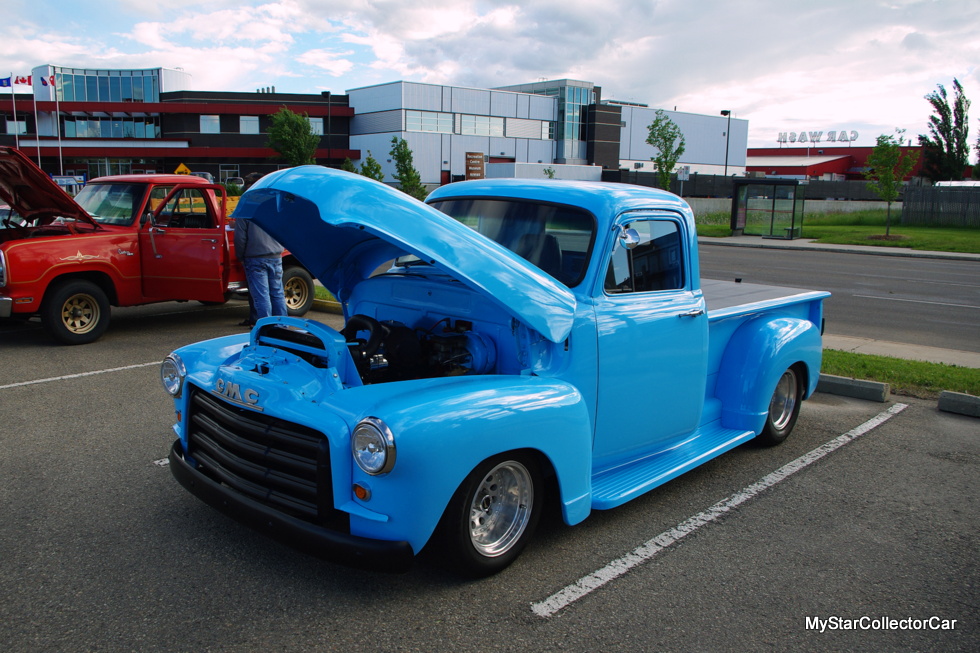 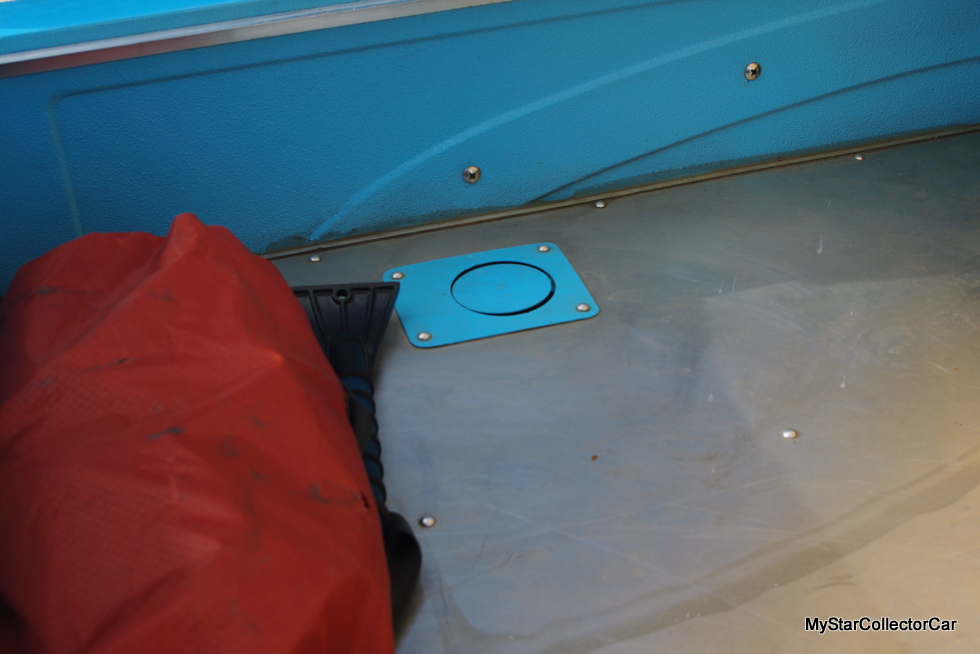 Les was initially unsure about the color but has changed his tune on it. The striking paint job was laid down beautifully on the truck and Les said the truck has new fenders and doors under the new paint. 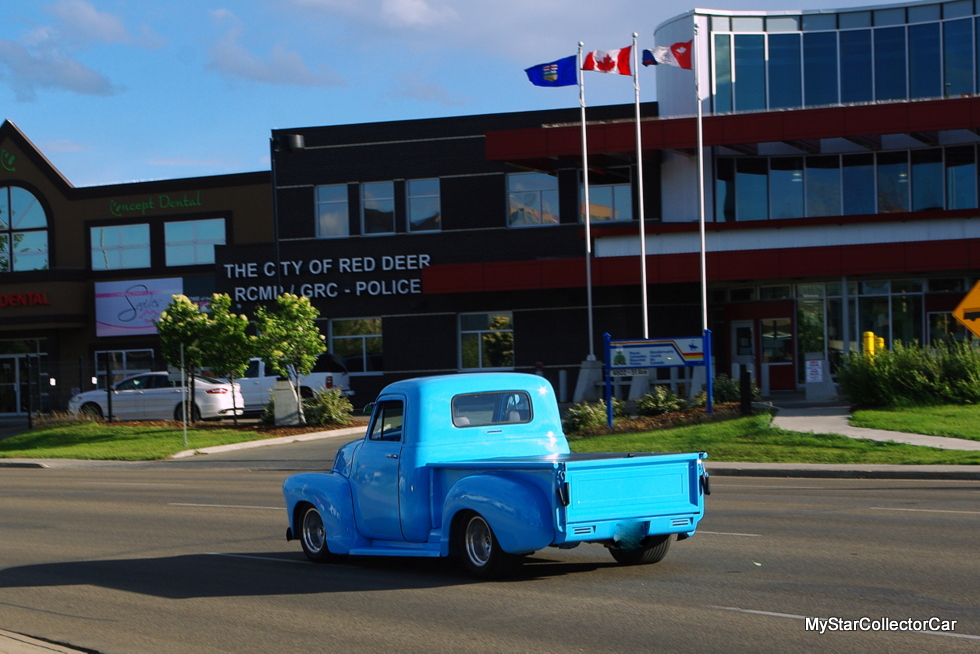 The overall result is a future show winner for Les-and a very cool way to enjoy summer behind the wheel of his stylish ’54 GMC.