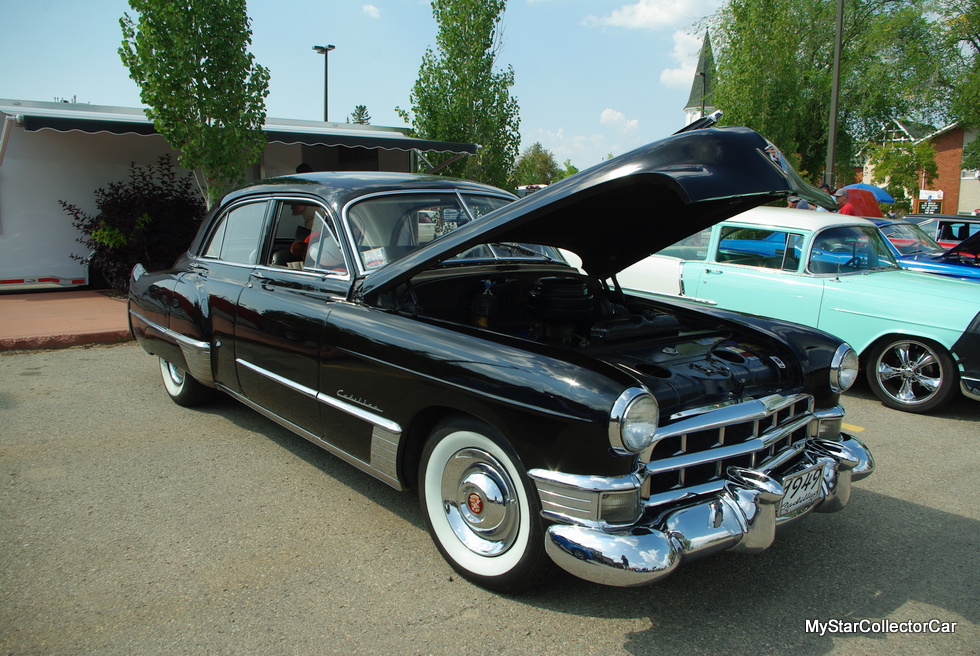 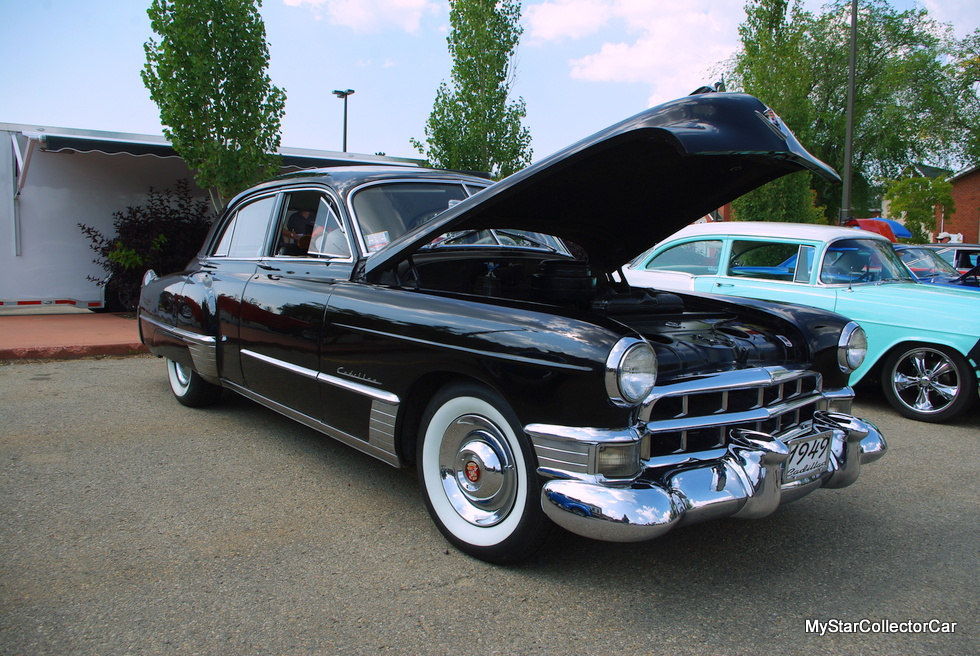 1949 was a big year for the Cadillac brand because the evolution of GM’s flagship model was well underway during that era.

Cadillac had already changed the body style game in 1948 and now it offered the first overhead valve engine in 1949 as part of its progressive approach to post-war automobiles in North America.

Bruce Eastwood is the latest owner of a 1949 Cadillac four door sedan and he is very proud of his Caddy’s originality and style. His Caddy has all of its paint and bling in original condition, along with its factory backup lights and turn signals. 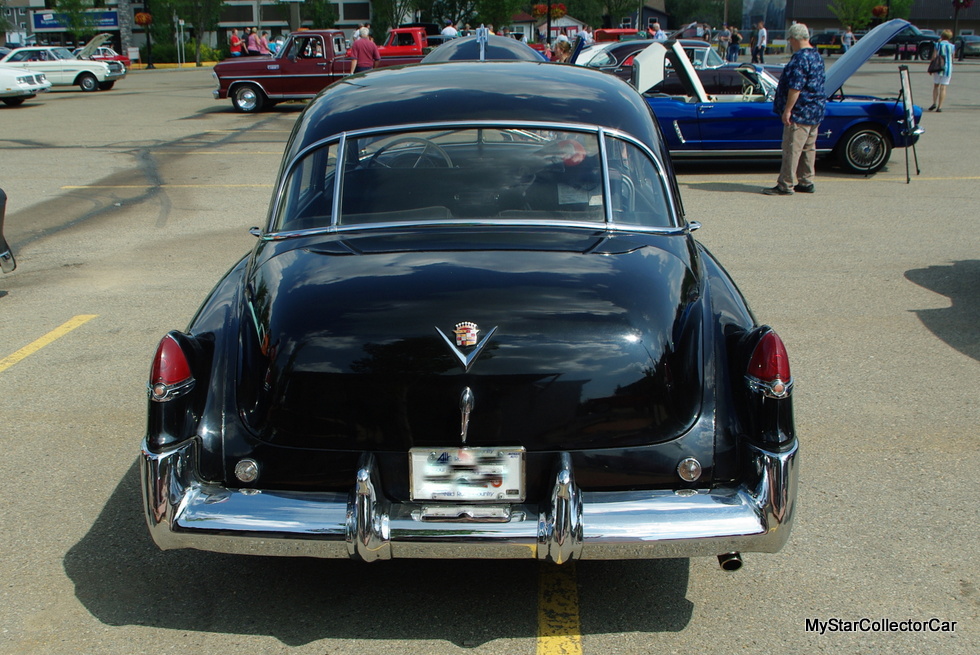 The big Caddy was originally purchased by a funeral home in Ontario where it served duty as a form of transportation for the living (and recently bereaved) customers of their services.  As mentioned, the black paint job on the car is original and the color was a universal choice for the funeral industry in 1949. 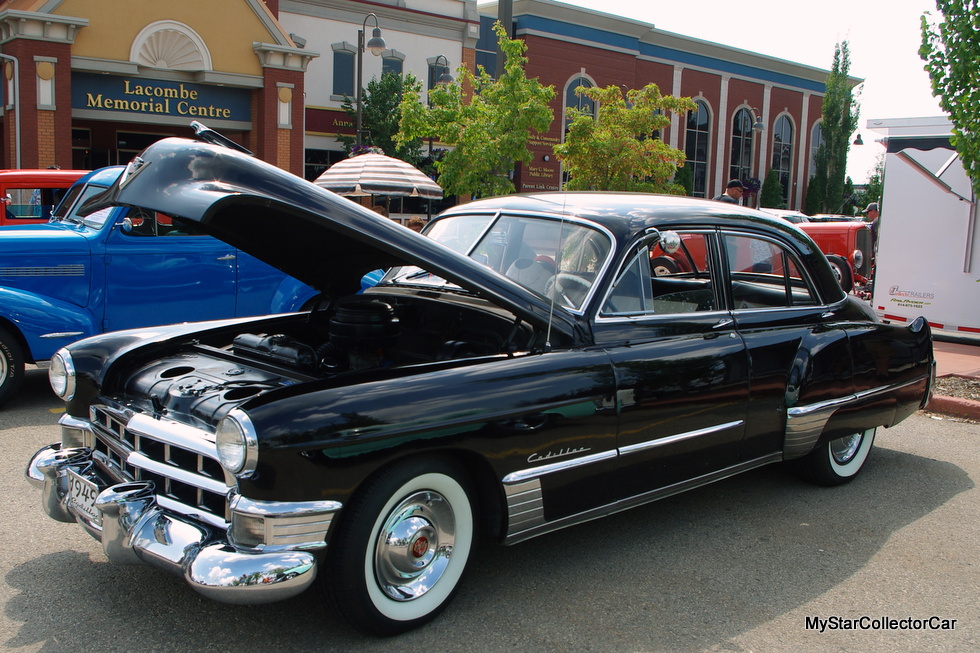 The car was retired from service and sold to a man who later suffered health issues and was forced to sell the car. Bruce became aware of the car and bought the 70-year-old Caddy from the previous owner about 10 years ago. Bruce is certain that he is only the second registered owner of the vehicle because its former owner was unable to perform the necessary tasks to make it legally road-worthy. 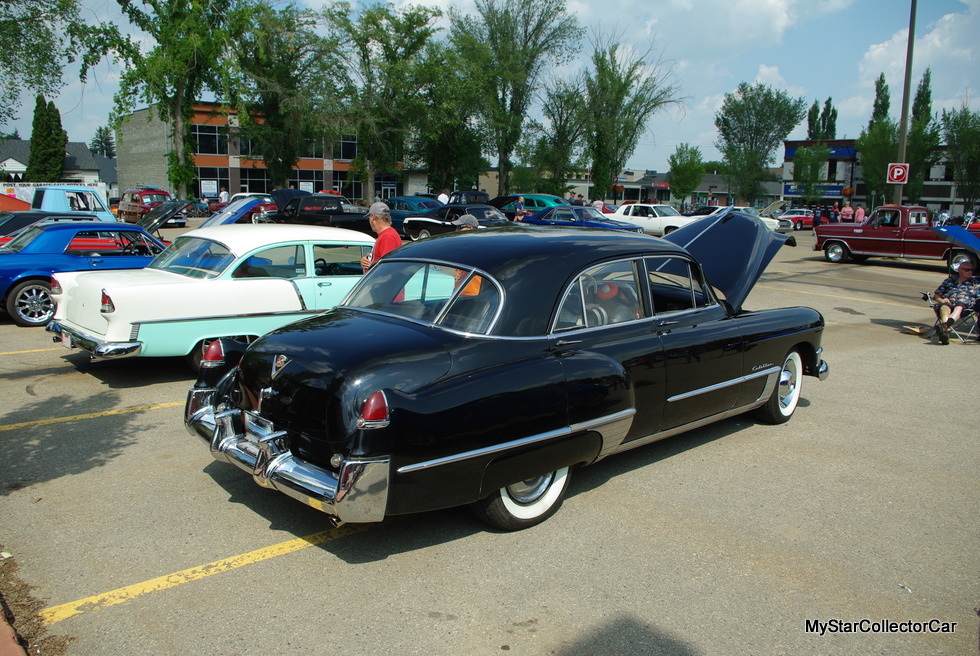 Bruce told MyStarCollectorCar that his Caddy’s black paint was faded and weathered because of the passing years; but it was still intact under all that grime. He was able to save the original paint through the efforts of a professional detail shop.

The interior of the Cadillac was a different story because the material in the car was “all rotten”, according to Bruce. Fortunately, Bruce was able to recreate the original look and feel of the Caddy’s interior and stick with his commitment to originality for the car. 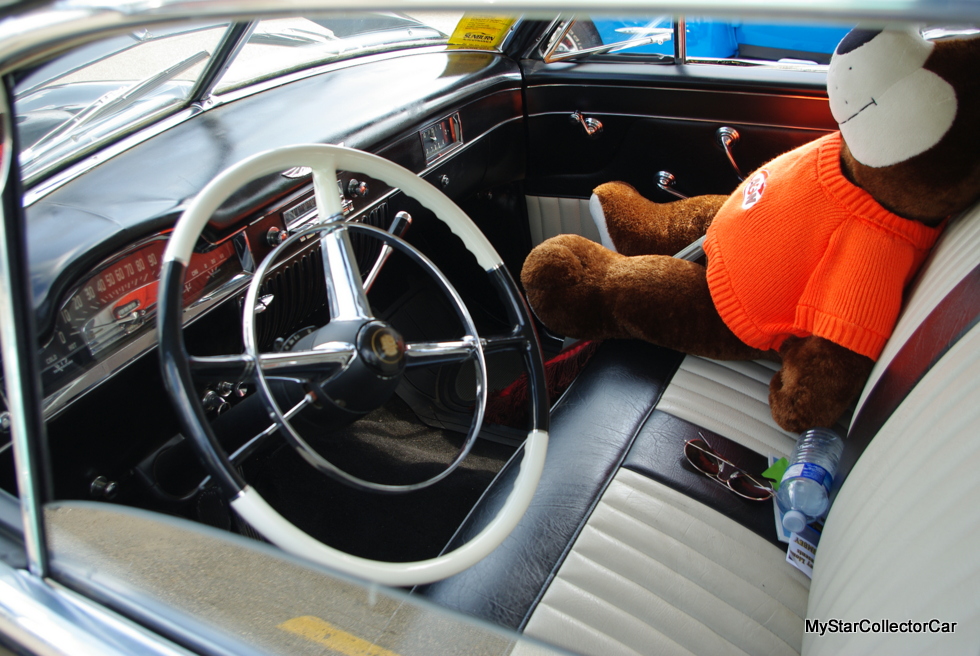 The interior work is one of the few changes to the Cadillac and was based on necessity. Bruce also added an electric fuel pump to alleviate a vapor lock issue with the engine in the Caddy. 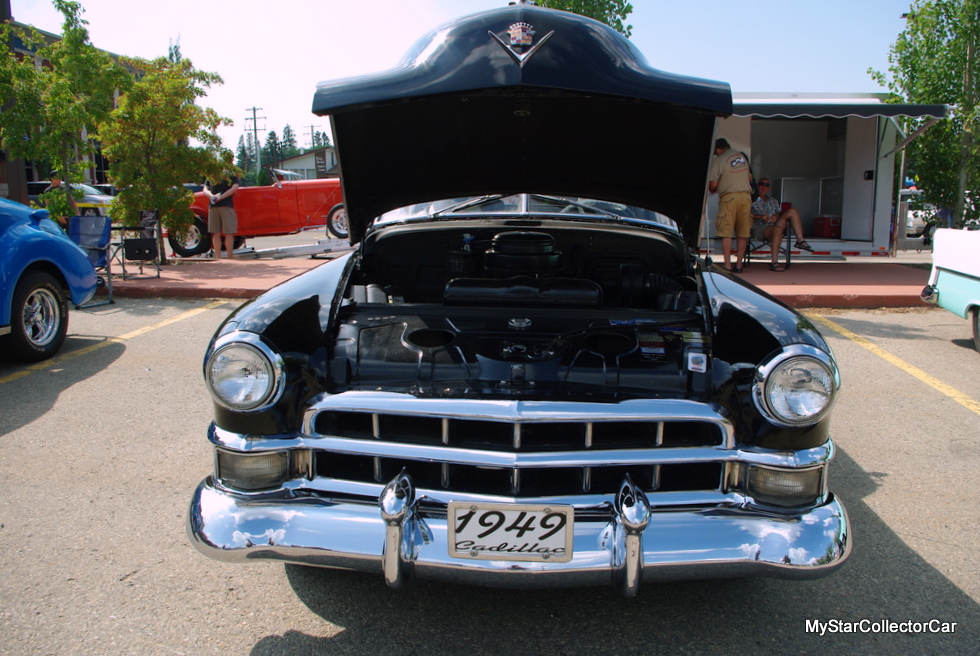 Vapor lock was common on older vehicles because of the location of the fuel lines in relation to the exhaust system in many of them. The result was a car that either stalled or refused to start in hot conditions. 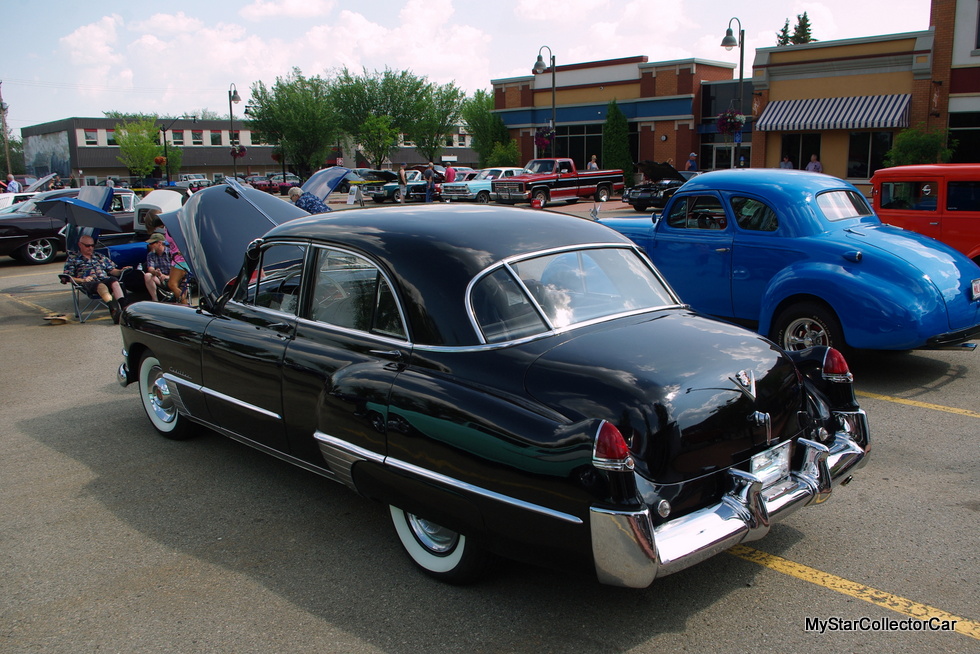 Bruce’s fuel pump change was the start of about 10,000 trouble-free miles behind the refinished steering wheel of his ’49 Caddy. The vintage Caddy “runs like a top” in Bruce’s assessment and he truly enjoys the drive in his stylish former funeral car. 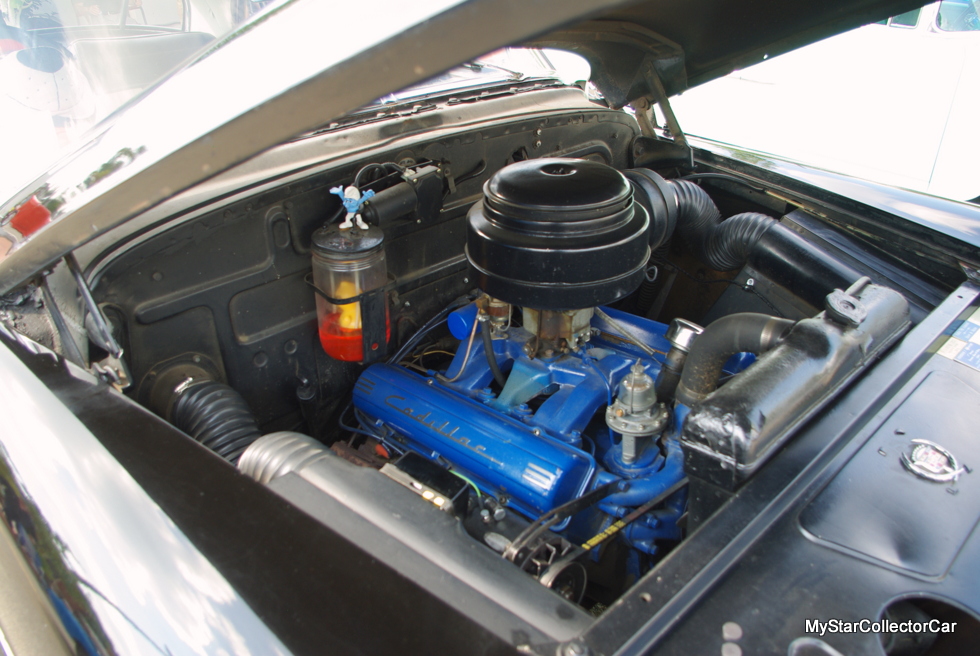 Bruce recalled his initial driving experience when he “didn’t want to drive it fast” and decided to proceed with caution on the road. He got comfortable with the speed and decided to up the ante until “all of a sudden I was doing 85 (mph) because the car really starts rolling at higher speeds”. Bruce’s wife was driving behind him in a modern vehicle and was surprised at the velocity of the ’49 Caddy. 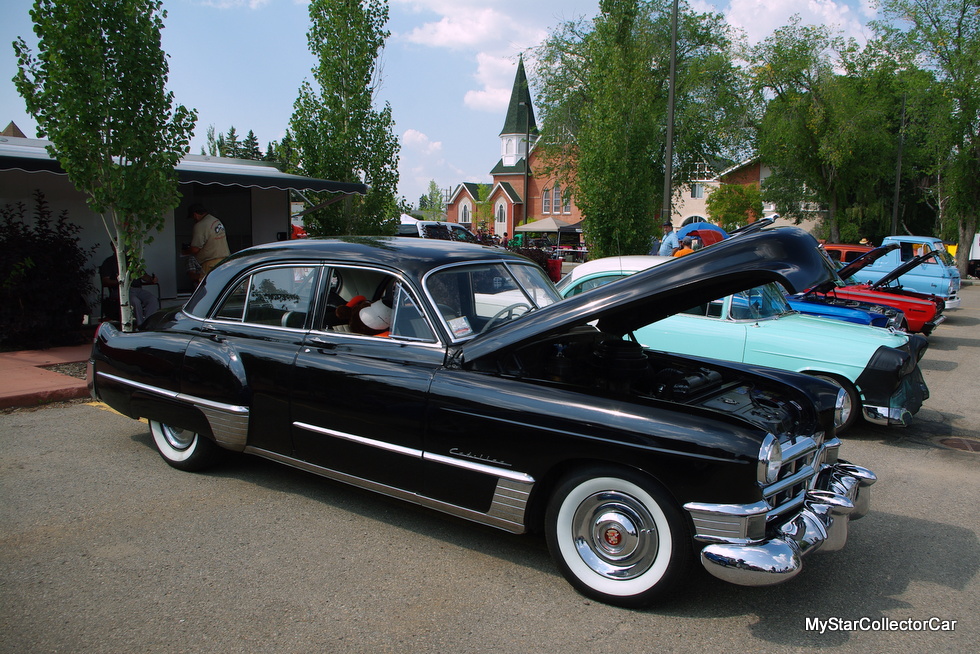 The experience proved that a 70-year-old car with a then-unique V-8 engine and factory automatic transmission has plenty of power to handle today’s roads. 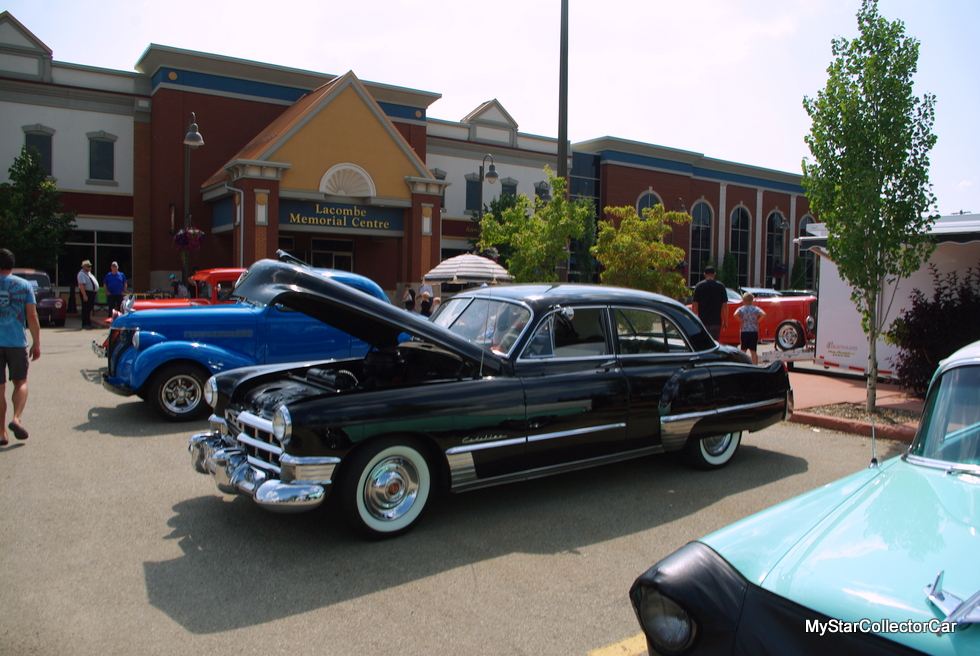 Bruce enjoys the atmosphere at car shows and is willing to drive his car to these events because, in his words, “We do it because it’s fun.”  Who can argue with that belief?