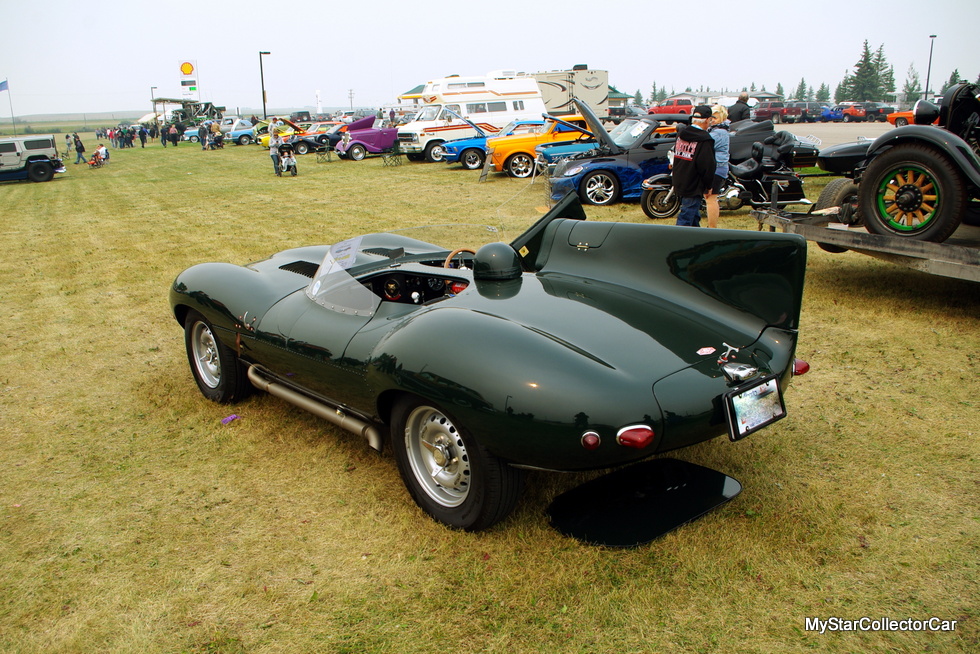 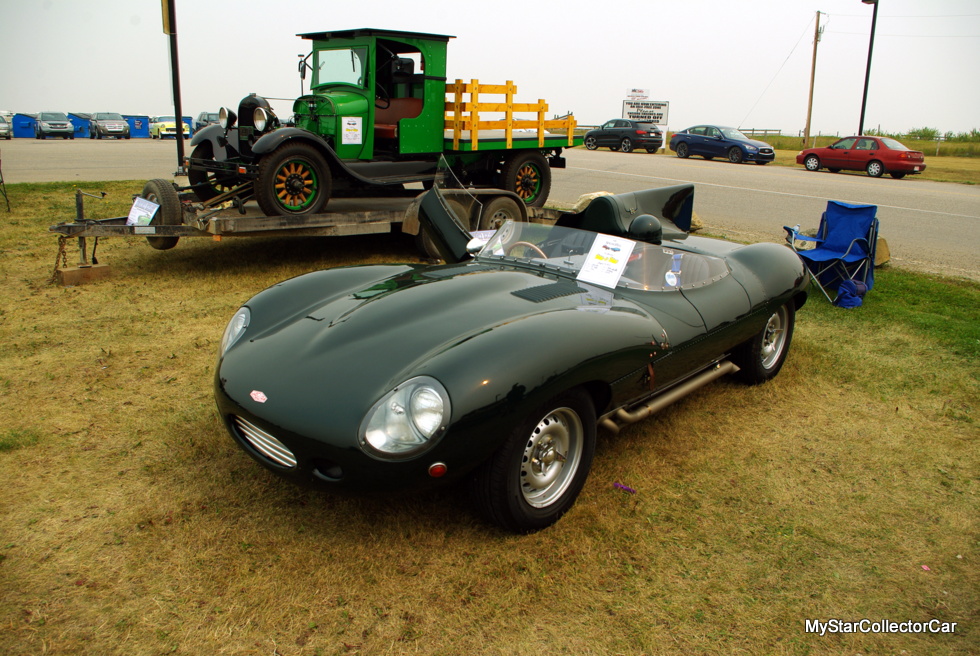 The term tribute car has become fashionable in the last few years.

They used to call them clone cars but the word “tribute” adds another level of style to the concept of reproducing a legacy car.

Most of the tribute cars are based on Detroit iron so you’ll see a Shelby GT Mustang where there used to be a humble 6-cylinder fastback but this 1956 Jaguar D-Type was built from scratch. 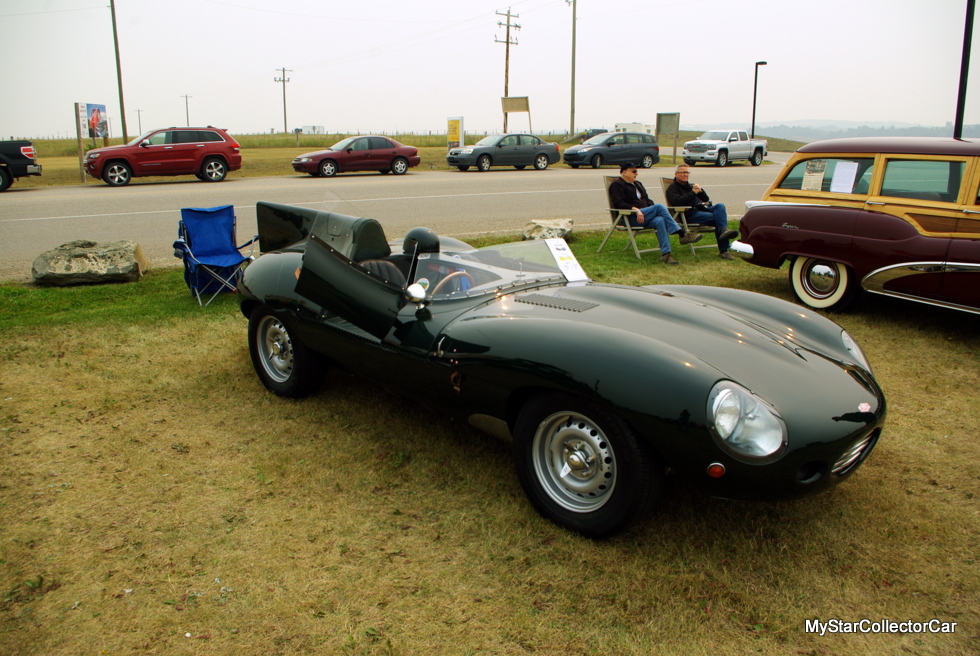 Tom Scully is the owner of this incredible tribute car. He’s a British car guy in the truest sense because he owns several vintage cars that began life in Great Britain but this D-Type tribute is the wildest car he owns. 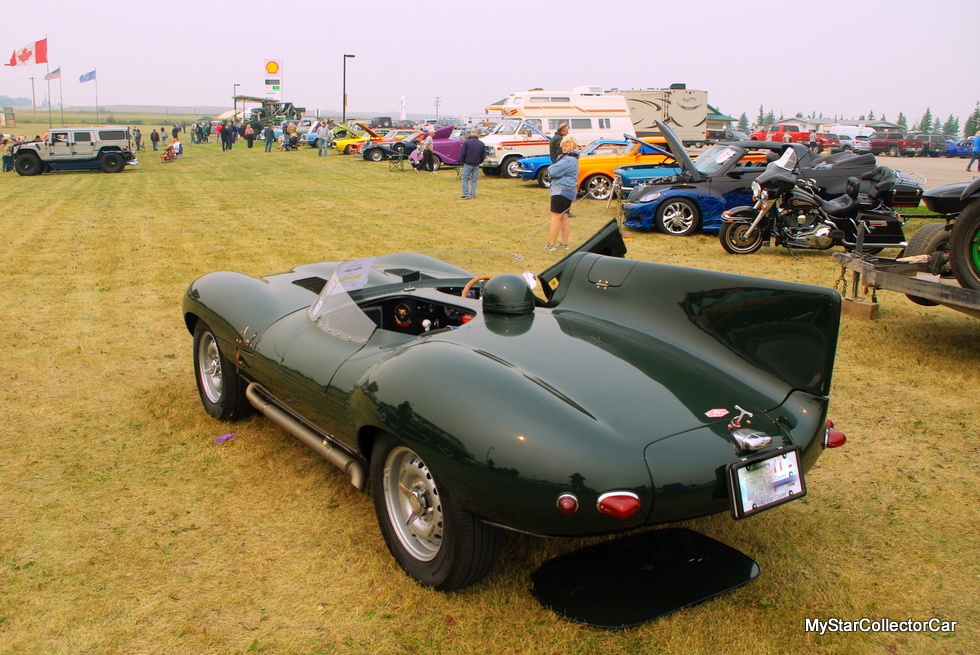 He’s the second owner of this car—the first owner was from Scotland. Tom hadn’t owned the car long so he was still in a learning curve about the driving experience but he definitely knew the history of this D-Type tribute.

This car was built in 1992 by RAM and they were meticulous in the details. They built the chassis and then used a 4.2 liter Jaguar engine (1966-68 XKE or 420) instead of the original 3.5 liter. Tom said the car has “about 300 horsepower” with the newer engine so it is very capable of serious performance. He believes it has seen some track time when it was back in Great Britain. 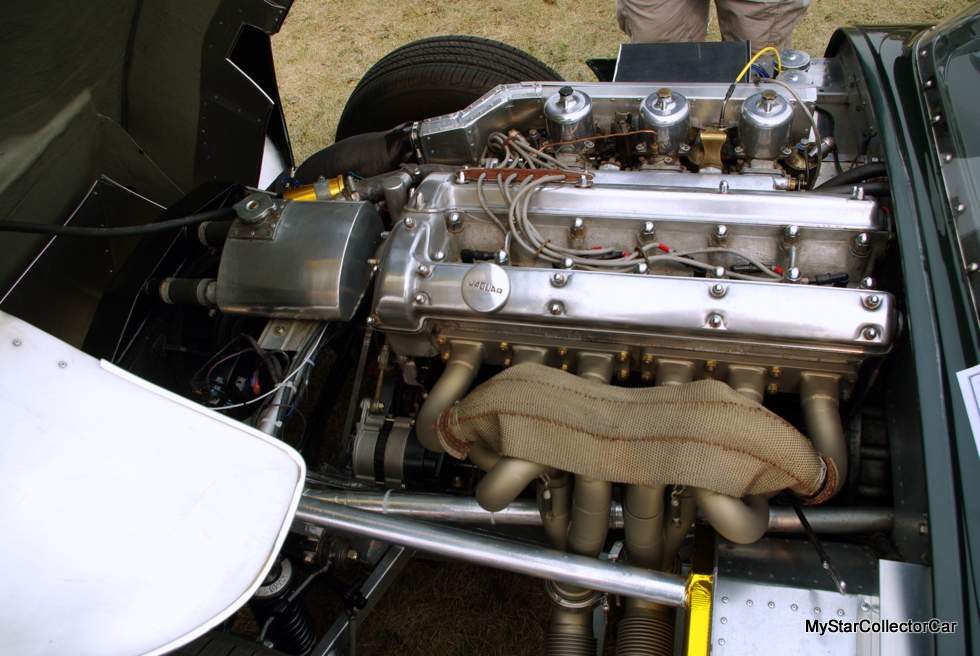 The cockpit of this car definitely displays a racing heritage. For example, the tachometer is angled to the left of the driver because that gives the driver a better view when the track gets a little hairy and concentration is extremely important. The whole layout of the car is definitely based on business over pleasure right down to the two-piece knock-off wheels (Dunlop dual-locking system). 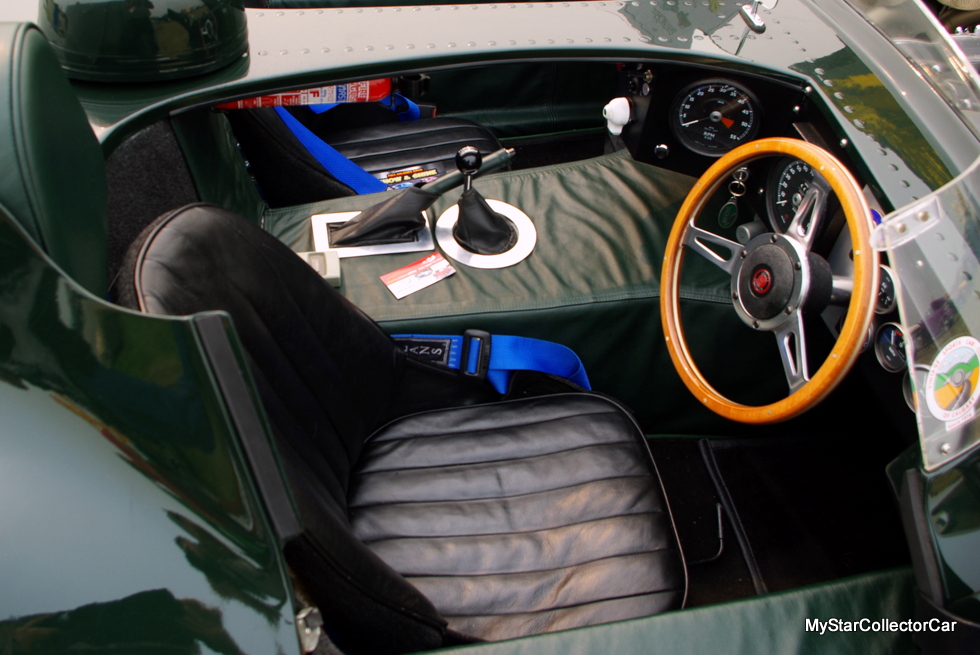 Tom added some refinements to the car. The exhaust system needed some work so Tom had a factory authorized builder construct it to specs and he said the process, “took two and a half months”. The interior was fully-functional aluminum, so Tom added a little comfort with leather seats. 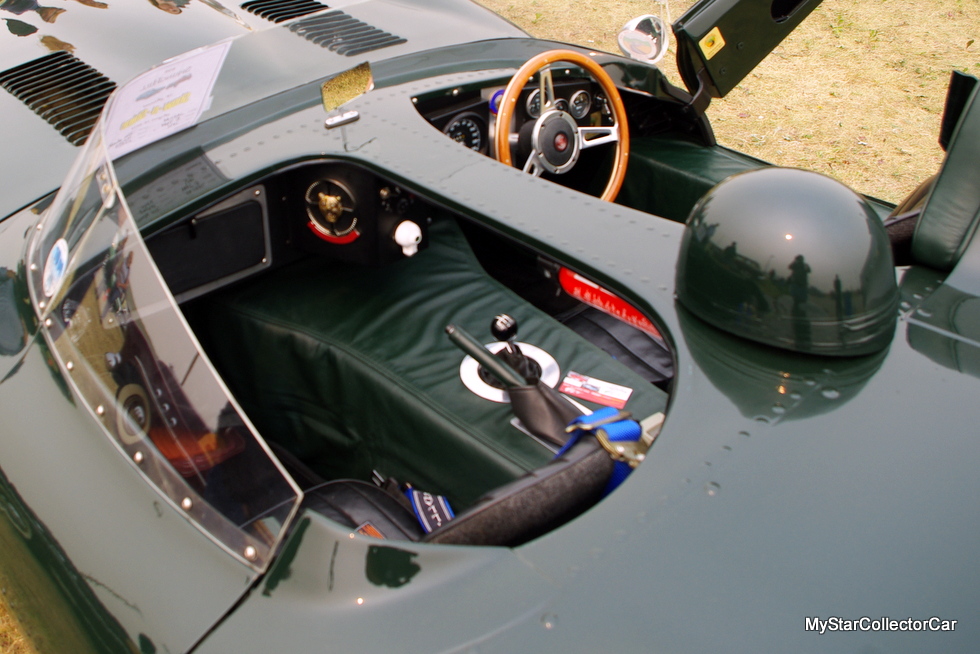 Tom admitted he’d only driven it “about 6 or 700 miles” because he was still “getting used to the car”. Bear in mind, this is a right-hand drive race car in a left-hand drive, 21st century world of traffic so his cautious approach is very logical. 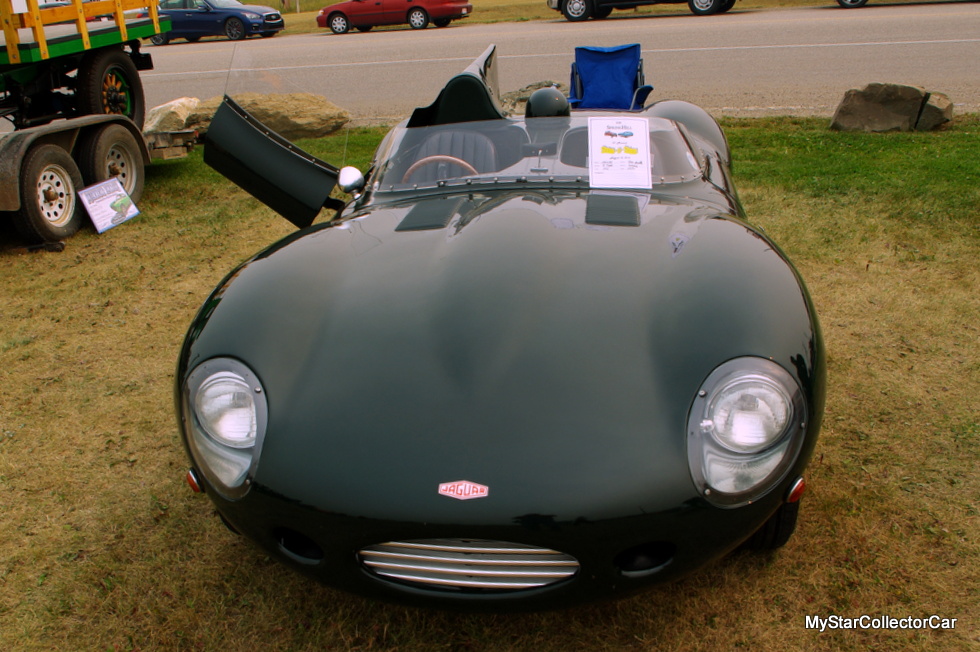 He said the “right-hand steering isn’t bad but you have to be a little careful in traffic”. Tom’s biggest adjustment is the left-hand shifting part of the equation but he said the overall experience in the D-Type is “very nice—it’s quite quick”. Tom said he gets more confident with every mile he puts on the car. 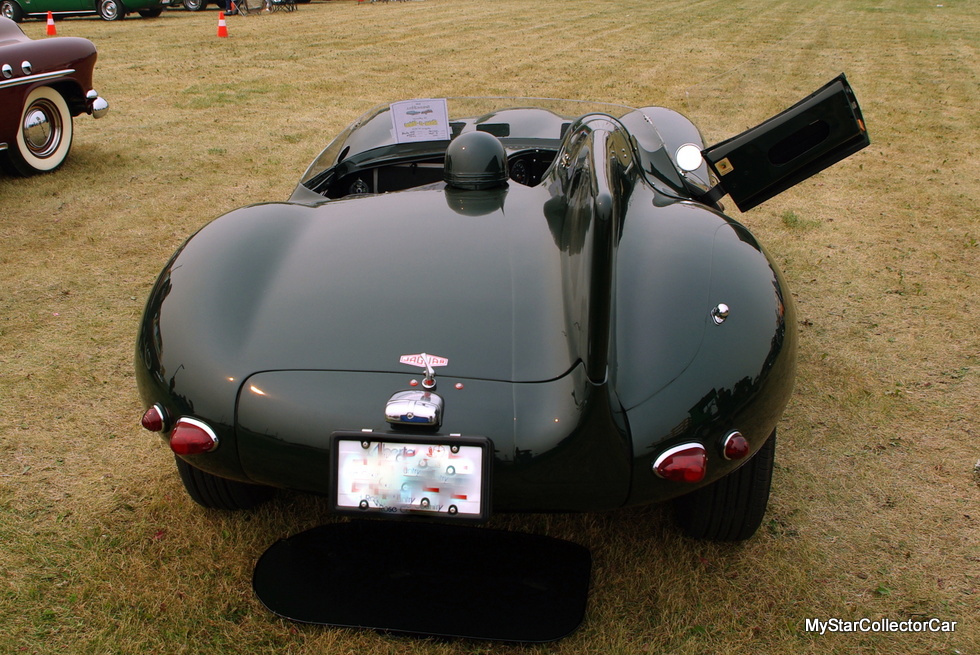 This car is a human magnet. The people factor made picture-taking a challenge because Tom had people around the D-Type at all times at the show. Tom said they’re always curious and most of them have some basic knowledge about the car so he faces a barrage of questions every time he parks the car. 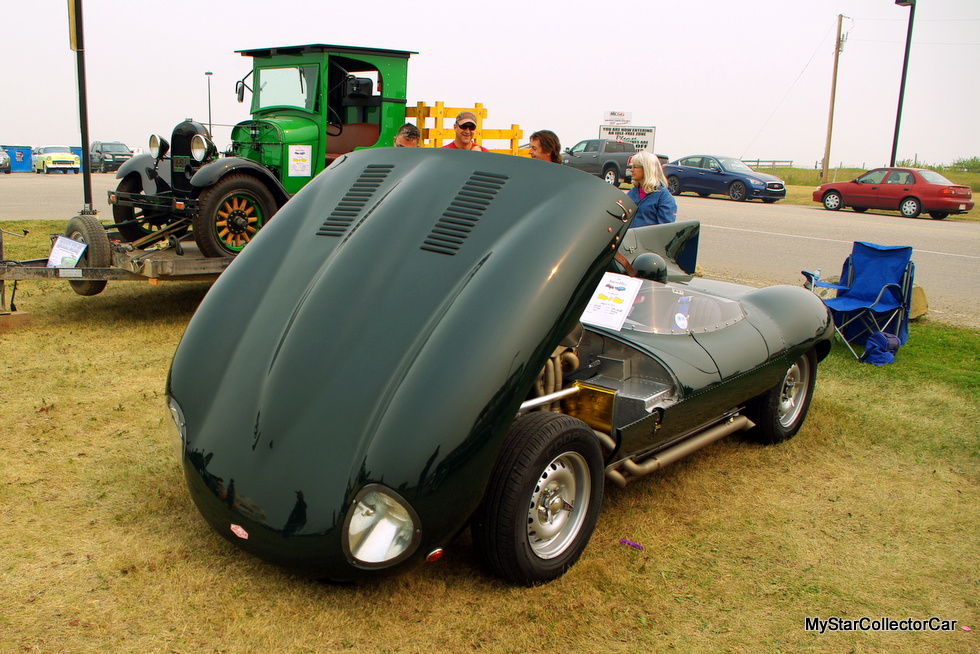 Tom said he’s “privileged to own the car” and he’s not worried about driving it because he has a fraction of what he’d have in an authentic D-Type. They are stratospherically-priced cars so you’ll never see them on the street but this car is in the real world. 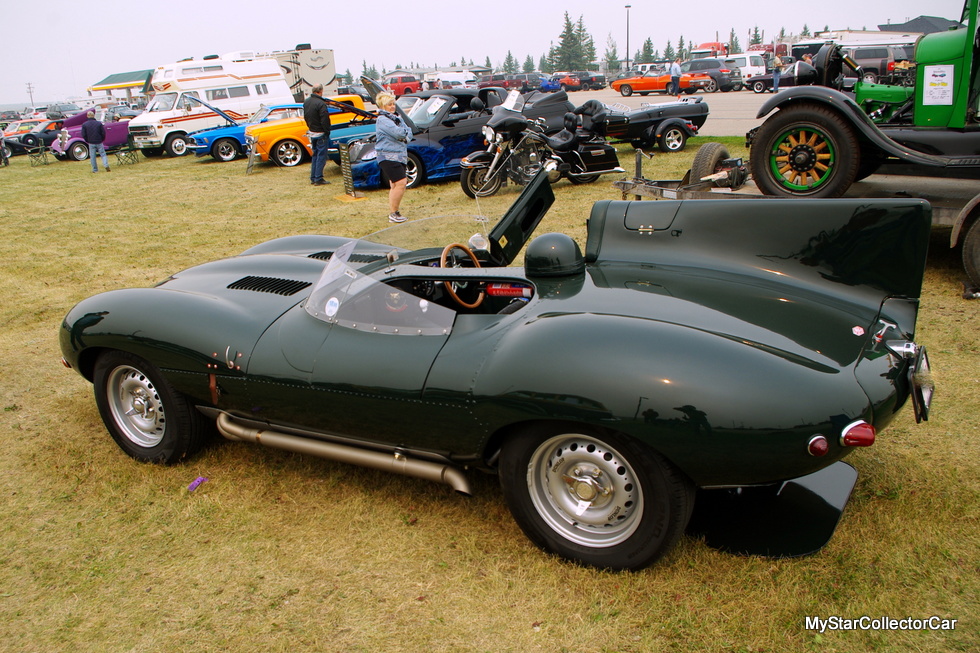 Tom explained it this way: “It’s driven—they last longer when you drive them”.

Jerry Sutherland is an award-winning veteran automotive writer with a primary focus on the collector car hobby. His work has been published in many outlets and publications, including the National Post, Calgary Herald, Edmonton Journal, Ottawa Citizen, Montreal Gazette, Saskatoon StarPhoenix, Regina Leader-Post,  Vancouver Sun and The Truth About Cars. He is also a regular contributor to Auto Roundup Publications.