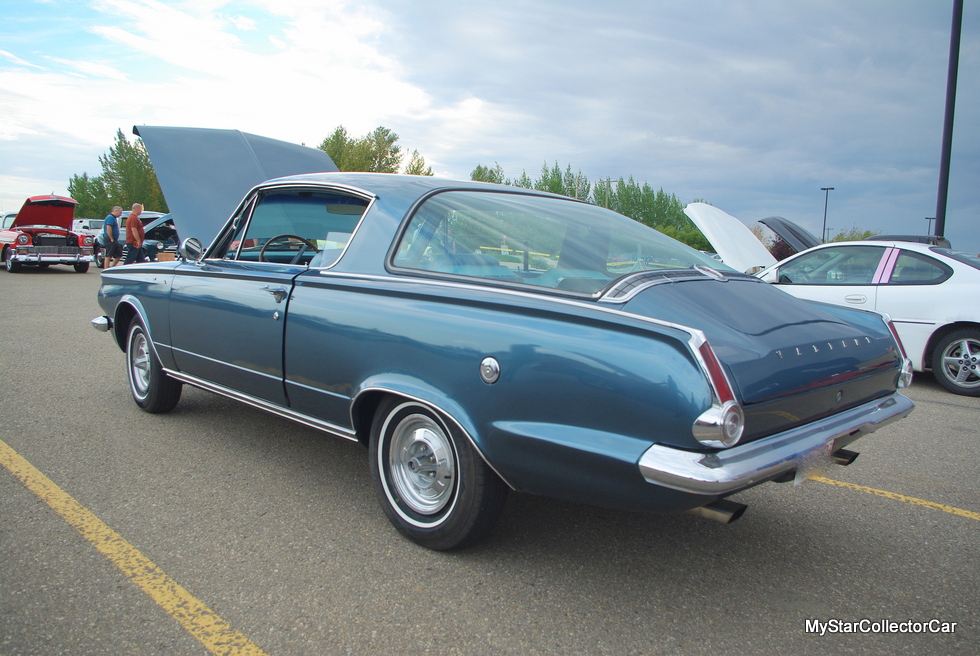 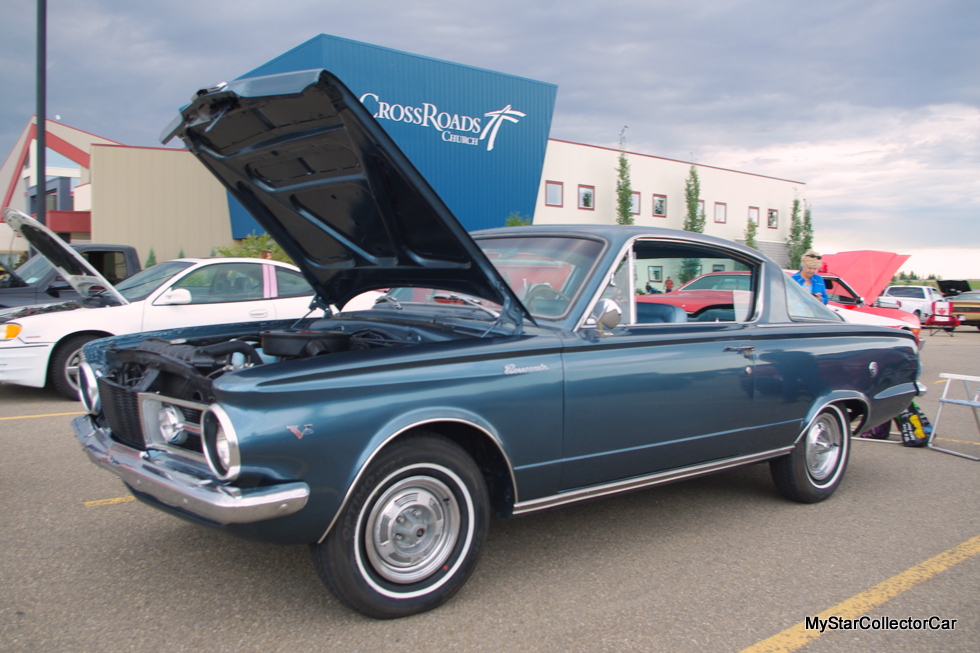 The family connection is one of the most common themes in the car hobby.

That “relative owned one” theme accounts for well over 50% of the car hobby.

Dave Rolfe is definitely part of that over 50% demographic with his ’65 Barracuda. His brother-in-law bought this factory 273 4-speed car right off the dealer’s floor when it was brand new. 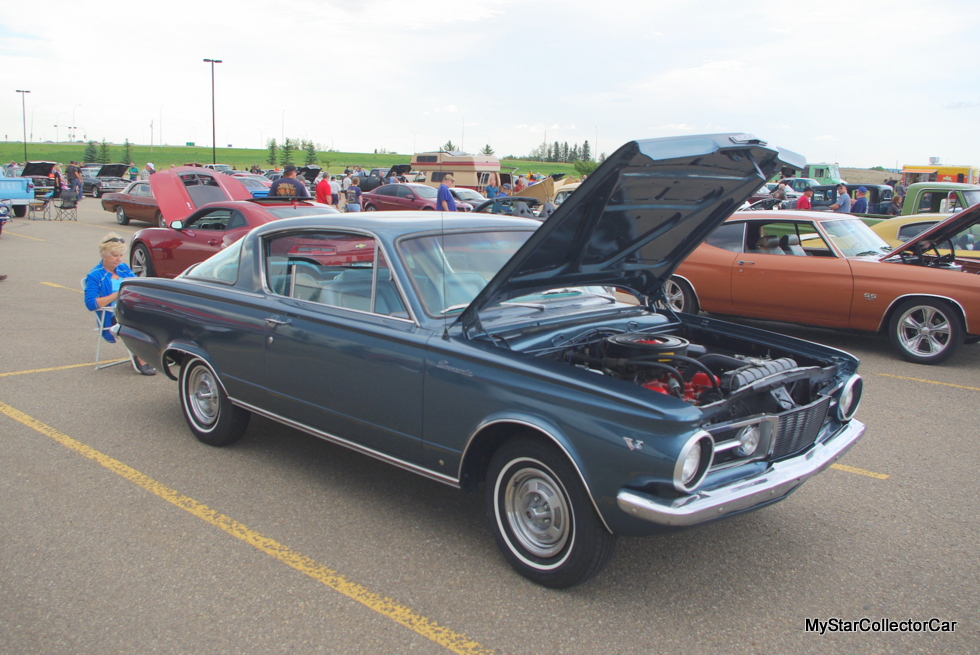 Dave’s brother-in-law drove it for twenty years before he put it in an extended hibernation. He reached the point where he had to decide what to do with the car and none of his kids wanted the Barracuda so Dave stepped in to save the car and keep it in the family.

Dave is brand new to the car hobby so he had to factor in a lot of unknowns with the car. He said the Barracuda was “relatively rust-free so there was very little rust repair, a little bit on both fenders”. Dave pointed out an area on the driver’s side fender where there was a dent but overall the little A-body was a relatively dry car. 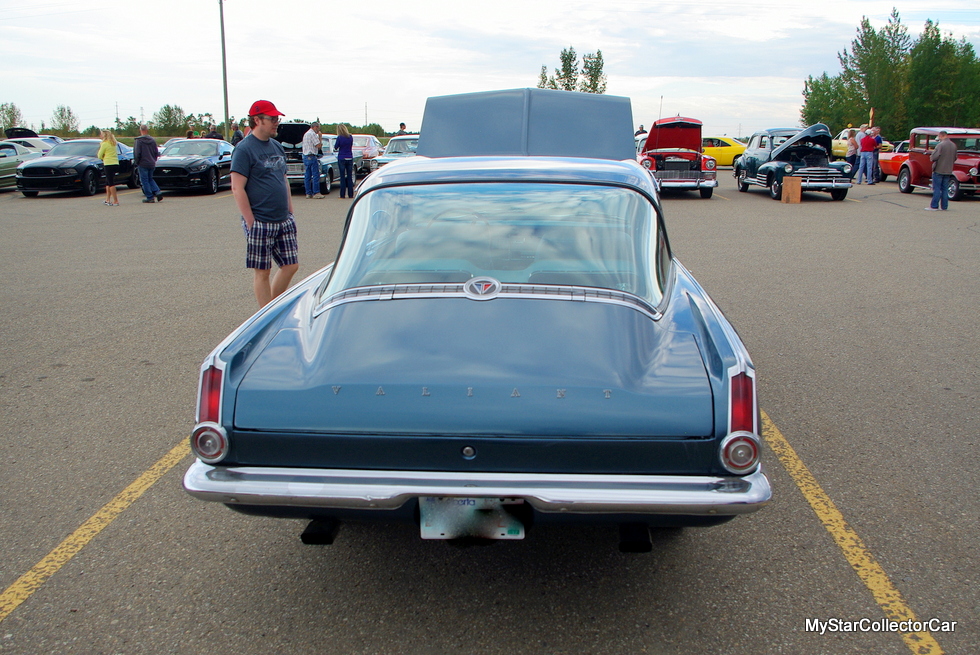 The power train was also in pretty good shape because Dave only had to deal with the top end of the engine. He also had the brakes done (including the upgrade to a dual master cylinder) and there was work done on the driveshaft. Dave admitted, “a rear main seal blew” and he was a little disappointed after all the work but Dave is also realistic about his entry into the old car hobby. 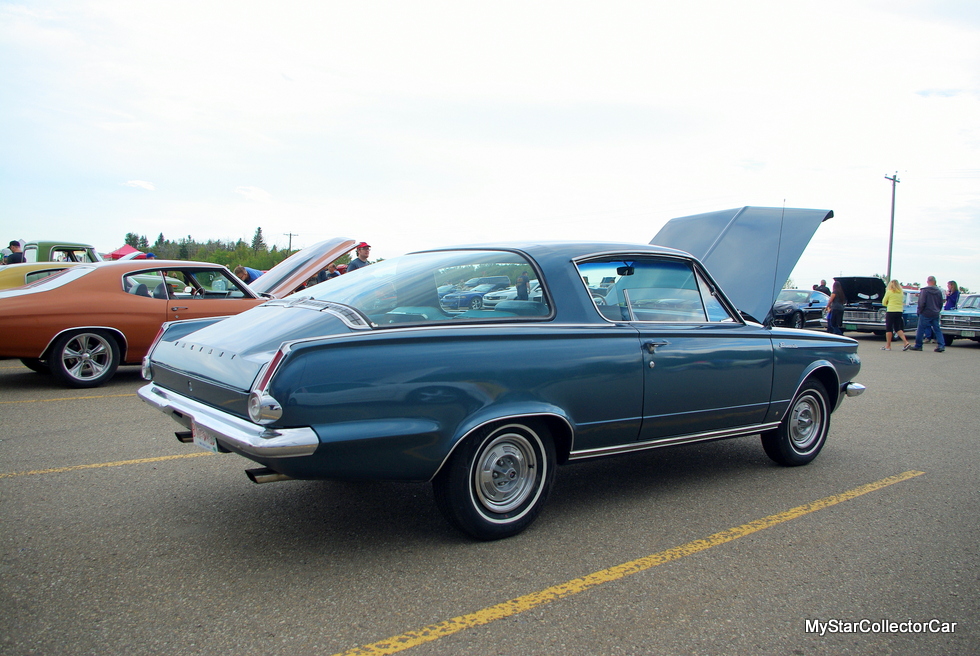 The paint is an approximation of the original color—Dave described it as “close to original but a little greener”. The interior is an interesting combination of original and aftermarket because the front seats were done in the original style with aftermarket covers but the back seat retained the original covering. 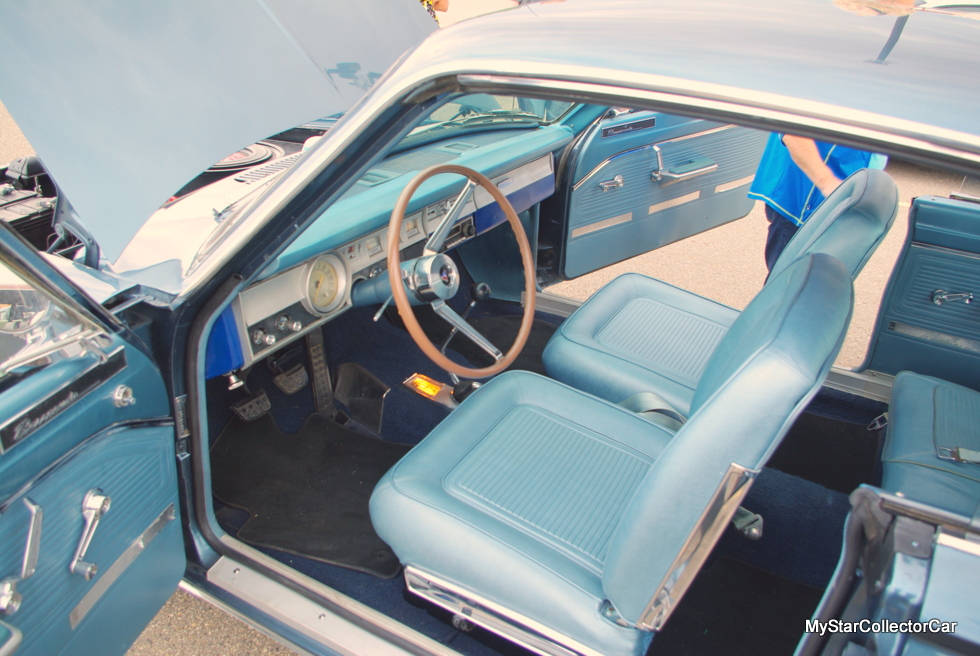 The rear seats have new internal padding but outwardly they are the original factory covers. The headliner was also redone and all the door and window rubber seals are new and you “have to slam them—you’ve had to slam them since new”. 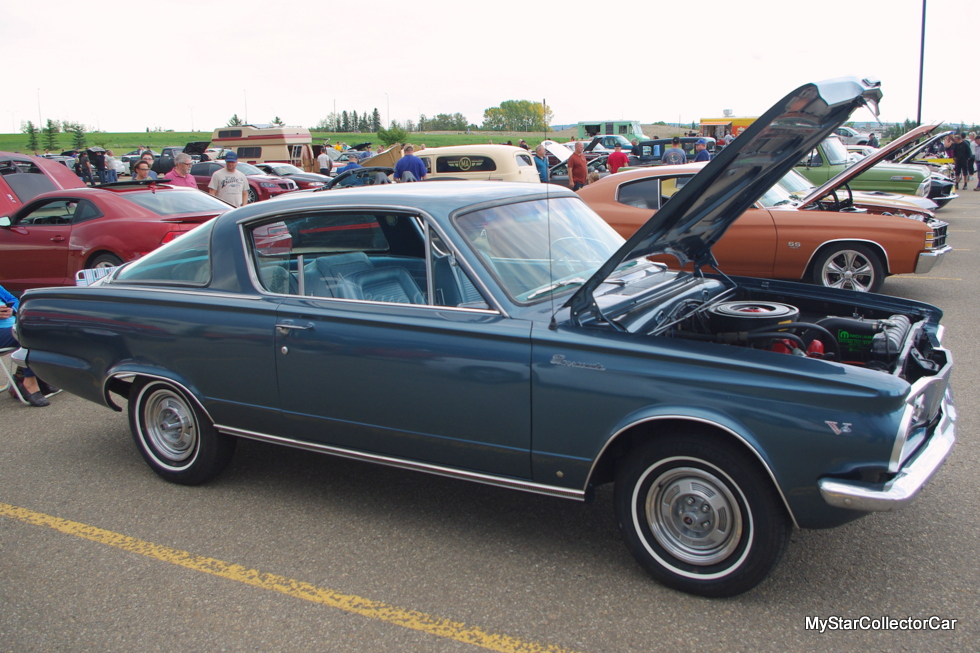 Dave redid the mufflers with an aftermarket set of duals so this Barracuda has a bit of a rumble. The rumble matches the performance because Dave said this solid lifter 273 V-8 has “tons of power”. He’d like to get the seat back a few inches so he doesn’t have to squeeze behind the wheel and his 6’3” brother-in-law swears there was “more room behind the wheel” when it was new. 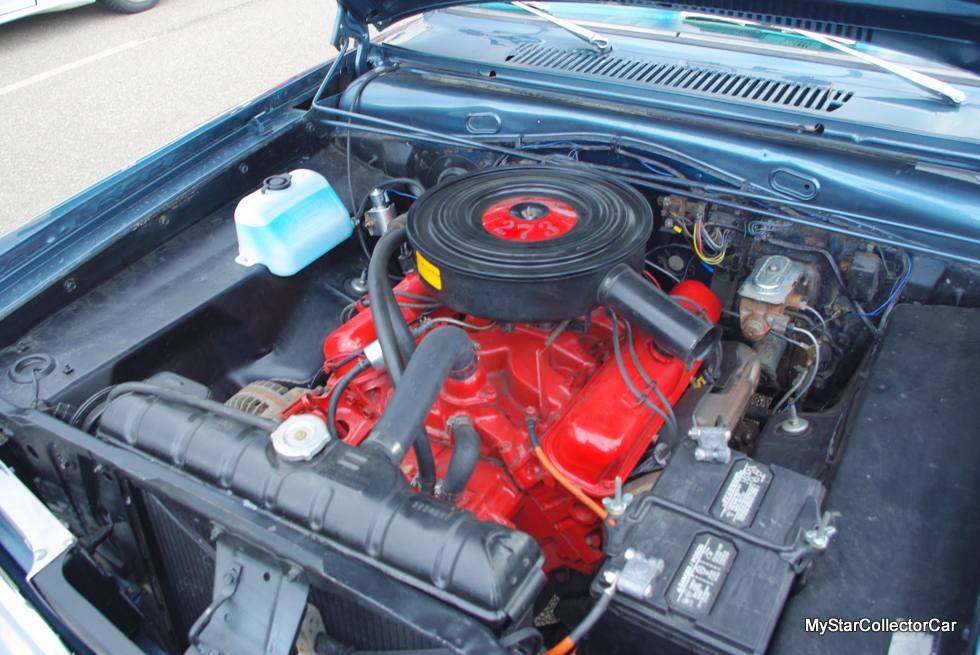 He’s also curious about the VIN because he says it decodes as “a Valiant Barracuda built in Ontario with a police code” so he’s looking for more information on the car. 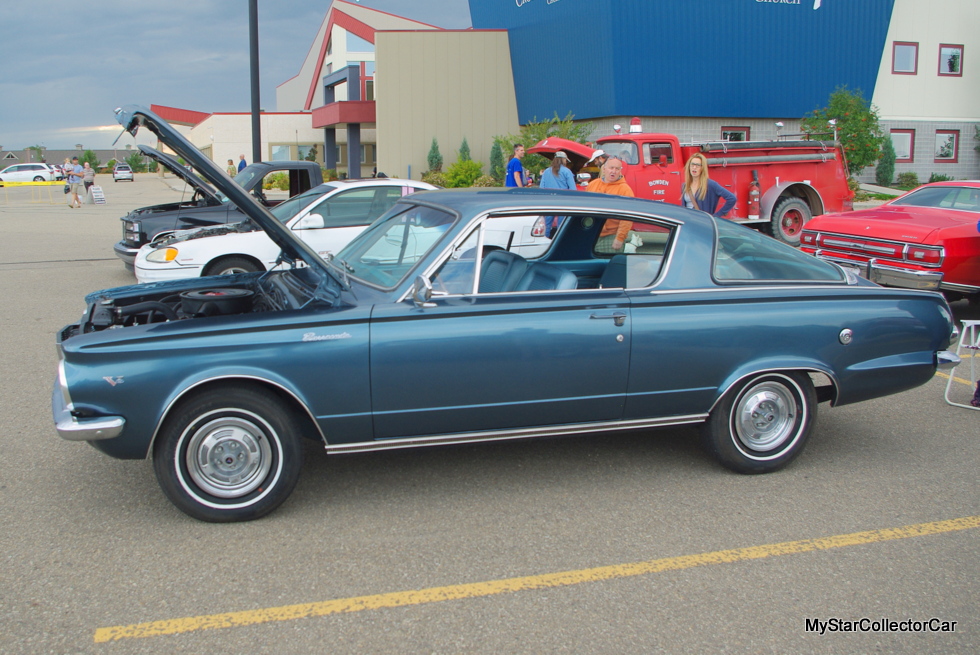 Dave is happy about his entry into the world of old iron and he knows it will involve a learning curve but it’s an investment he was happy to make because it saved a classic Mopar and kept it in the family. He’s particularly happy with the succession plan for the Barracuda:

“They won’t get an inheritance but they’ll sure get a cool car”.

HOT FUN IN THE SUMMERTIME AT THE SYLVAN LAKE CAR SHOW