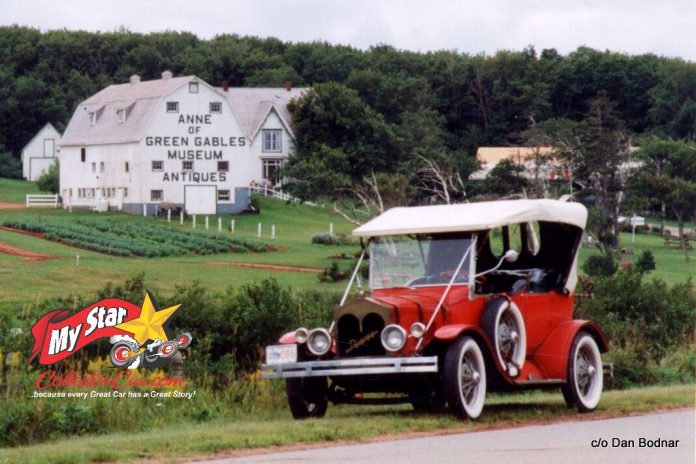 The 60s TV show ‘My Mother the Car’ earned the title of second worst situation comedy ever made, so it was a punchline for every comedian of the era.

Some of today’s TV shows could definitely challenge for worst show ever made plus none of them had a cool old car for the lead star of the show.

David Bodnar has the answer. He’s the proud owner of the ’28 Porter from ‘My Mother the Car’—thanks to perseverance on his part and luck. He started by clarifying that the ’28 Porter never existed. There were two versions of the Porter in the early 20th century, but this car never existed until TV made it a star.

David explained how he became the owner of My Mother the Car. He’s a pop culture fan and specifically–he is a huge fan of 60s TV culture. ‘My Mother the Car’ was one of his favorites—he even built the model when he was a kid. He tracked the car down and found out a man named Harry Costa owned the car. David became friends with Harry and eventually this relationship made David the next owner. That was in the mid-90s.

The car is actually a 1925 Model T, and it was originally a street rod built by Norm Grabowski. Norm was a legendary car builder and father of the Bucket T concept. Norm was also a character actor in several movies, so he was connected to Hollywood—that’s how the ’28 Porter was born. David explained how it was originally built as a street rod–it was that version of the car in a B-movie called ‘Sex Kittens Go to College’.

The TV people wanted a different look, so the car was transformed into what they thought a 1928 Porter would look like. There was an add-on trunk and other modifications to give the car a period–correct 20s vibe.

They kept the original 283 small block Chevy and Powerglide transmission (circa 1962) so this hero car (main vehicle) is actually a lot faster than the 4-cylinder 45 mph slug it was supposed to be in the show. Norm Grabowski used the original Model T steering column, so he ingeniously used the throttle lever as the shifter for the Powerglide.

David admitted he had a lot of work when he became the next owner, because the car had suffered from storage over the years. He also had a goal—he wanted to drive it in the 2000 Coasters run across Canada. David said, “It was a scramble to get it together” because he had to modify a few things (like temporary side curtains) to make the giant road trip. David made the deadline, so this TV star car did a marathon trip from Western Canada to Dartmouth, Nova Scotia.

The car made the trip with only a few problems—the tires on the car were old and two of them became an issue. David ran the Porter at 60-65 miles per hour because it could easily handle it—thanks to its street rod heritage and Model A wheels. David’s biggest regret was camping every night on the run because living out of a tent got old fast.

He’s also used the car for shows, Easter parades, weddings, and a 2002 Grey Cup parade, so he’s exposed the car star to a lot of people who remember the show. They love the car once they know what they’re looking at, so reactions are always big—and positive.

David said the car is really starting to show its age, because the paint is falling off in chunks and the transmission is “leaking badly”, so he’s doing what every car does—he’s constantly working on his car. David calls himself the caretaker of the car, therefore he respects the duties that come with the title.

He also defends the show because he’s a huge fan of Jerry Van Dyke—the star of the series. He said, “It gets slagged a lot but, it’s really not a bad show and he (Van Dyke) was a very talented man”.

THE 2019 MIRROR CAR SHOW: SOMETIMES SIZE DOES NOT MATTER

MSCC MAY 26 “WHAT’S IT?” WEDNESDAY—START WITH THE TAIL LIGHT CLUE