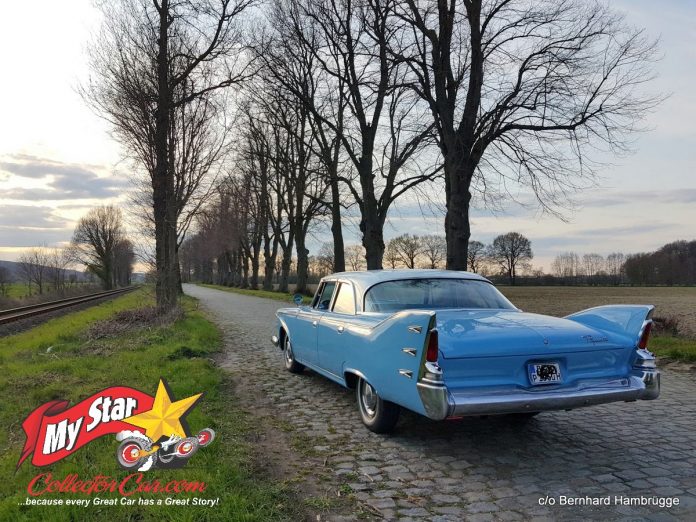 Car projects can be found anywhere, but in most cases, they’re found in barns, garages or pastures.

Bernhard Hambrügge is the proud owner of a ’60 Plymouth–he was happy to tell the story behind his classic fin car. He explained his connection to the car: “I always liked the cars of the 50s and 60s. When I first saw my ‘60 Belvedere, I realized that it would be a tough job but somehow a challenge too”.

The car was less than expected: “It was a crazy adventure!!! I found my car in 2011. The body was parked vertically in a barn here in Germany! The condition was a nightmare and of course incomplete but somehow, I fell in love with it”.

Bernhard had a good working knowledge of the Plymouth’s history: “Based on the US title the car was last registered in Plainfield, New Jersey before it was exported by a dealer to Germany. The car arrived in Germany in 1988”.

The story continued in Germany: “It was in poor condition with a lot of rust all over it. He sold the car to a young fellow who drove around the town for a few days until the police stopped him and put the car out of service due to technical problems”.

The restoration process had begun: “The guy started the restoration process and dismantled all the parts and stored it at an old farm. Then he moved to Spain for a couple of years and forgot about the car. After returning, he realized that a lot of parts like three of the four doors, the motor, back lights and some other things disappeared somehow! He decided to sell the car and placed an ad on the main web market for cars in Germany”.

Bernhard realized he was in for a lot of work: “There were a lot of missing parts! Rust was all over it! But it was obvious and something I knew when I bought it for about 1800 USD”.  He had an immediate job to do: “First I had to convince my wife and neighbors that I didn’t go crazy! Then I needed a few days to convince myself that I wasn’t insane!”

Bernhard got over the shock and mapped out a solid game plan: “I started the body work at one corner. It was important to try to see only one section at a time – otherwise it would have ended in complete frustration. After finishing one part, I moved on to the next part”.

The missing parts were another big issue, but Bernhard took a tried-and-true path with donor parts: “In parallel, I tried to find the missing parts via web search. I bought most of the parts (e.g. the doors) in the US. The push-button transmission is from a ‘62 Imperial from Spain and the 383 motor is from a ´64 Polara from Germany”.

Some original parts had to be saved: “Parts like the doors, the trunk lid and the engine hood went to a specialist for chemical de-rusting and coating”. The cosmetics were also addressed: “Next was the painting job. The underbody protections after de-rusting are 2 x rust primer, 2 x paint and 2 x special car wax. All cavities were treated with a special anti-rust-oil”.

This was not an easy or short process: “After that, the completing process and the interior work started. Altogether – with some breaks in between – I worked on the car for 10 years. I did almost everything by myself with the exception of the final painting”.

The pain was worth the gain for Bernhard: “Now after a lot of work it´s powered by a 383 and passed the official technical inspection recently. My baby is back on the street!!! Some photos before and after restoration. The 383 motor is a dream! The power and sound is incredible for such an old car”.

Bernhard was initially cautious behind the wheel: “First I started with some small circles close to my home to check if everything works and do final adjustments. Now I started the first nice excursions with the car, and it really is fun to drive!”

Fin cars really stand out in Germany: “I own a´60 Opel Olympia Rekord which was very common in Germany in the 50s and 60s.  When people see this car, they start smiling, especially the older guys remembering the good old times. The Plymouth wasn´t on the streets in Germany in the 50s and 60s. Today, when people see the Plymouth on the street, they look as though it just arrived from space!”

Bernhard is at a great stage with the Belvedere: “I am pretty sure I will always find something to do on the car. But at the moment I just enjoy driving”.

He is convinced this 1960 Plymouth Belvedere was worth all the pain.