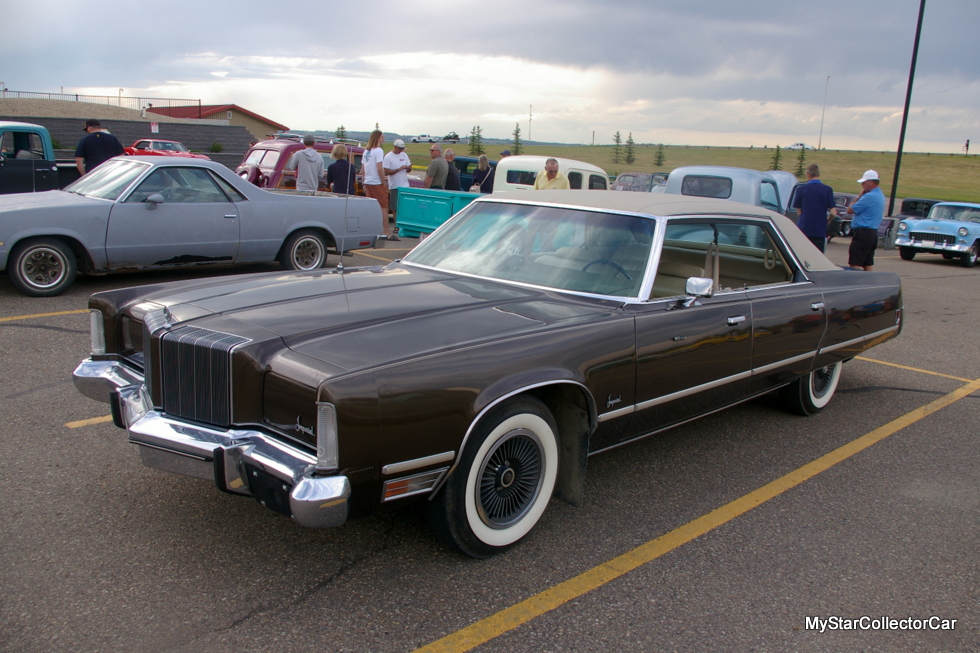 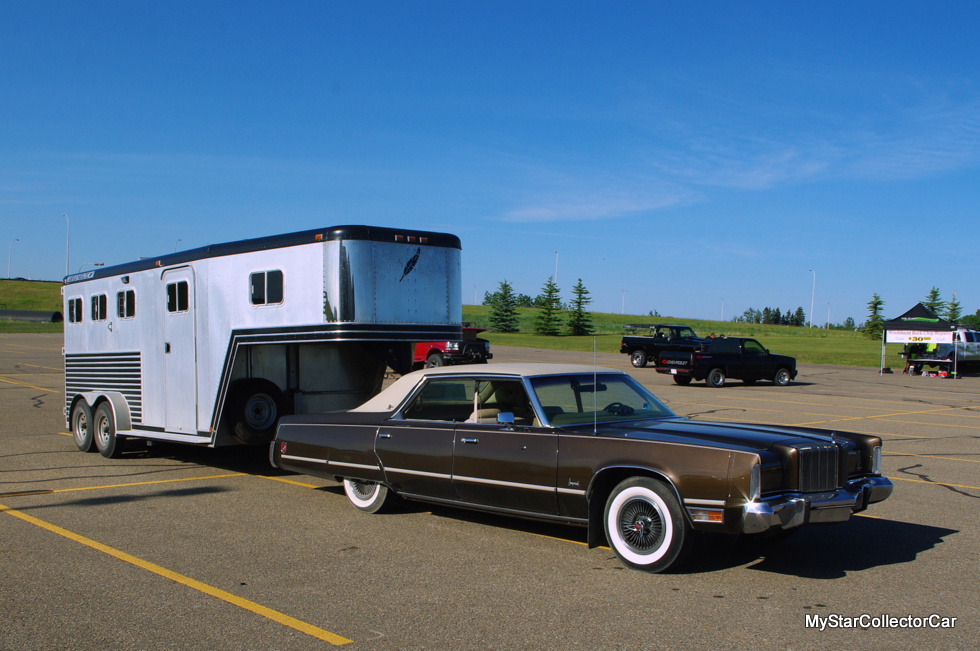 1974 Imperials were living on borrowed time when they hit the showroom because they were giant gas-guzzling dinosaurs built after the 1973 Arab oil embargo.

‘It was too late for the Mopar boys to put the brakes on production for their big luxury cars, so they went ahead and built the king of the C-Bodies.’

A typical Imperial customer would not have been overly concerned about the North American gasoline supply issues in 1974. 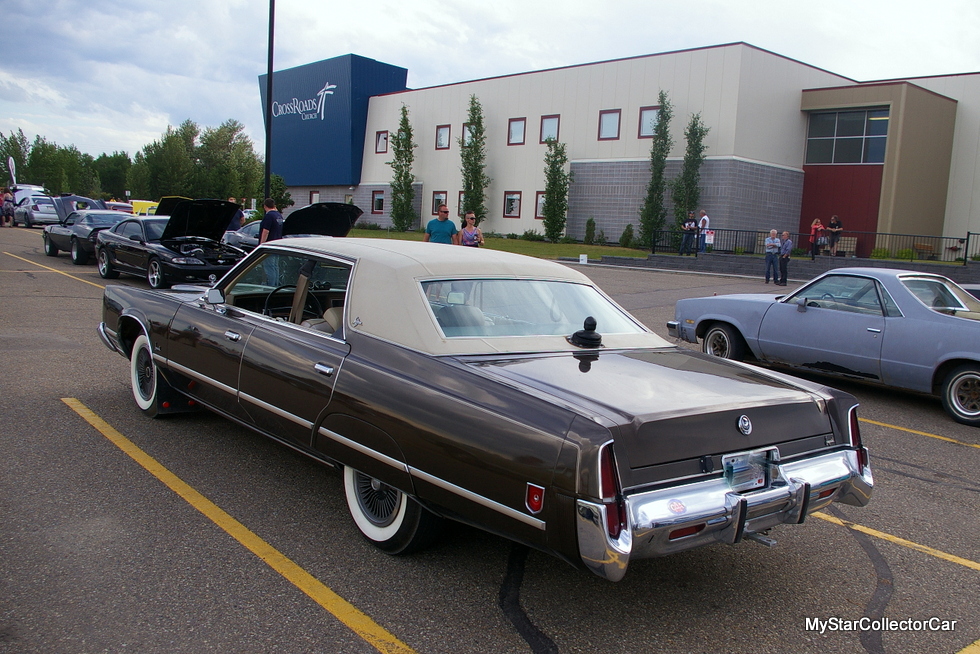 They were older, more affluent buyers who were more concerned about a high end luxury than the price per gallon at the pumps and an Imperial fit their needs to a tee. 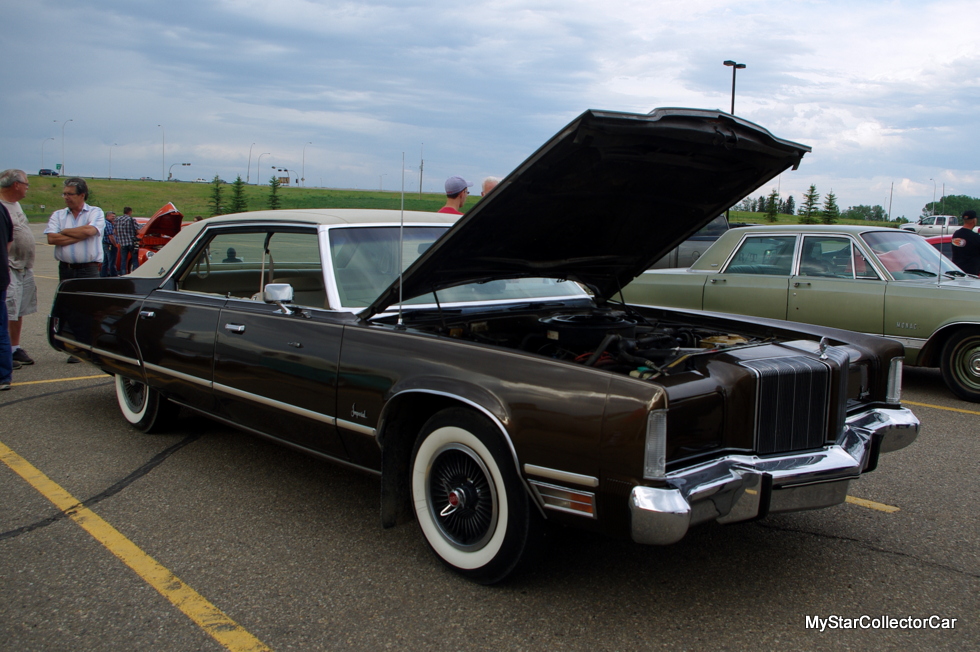 Imperials were always the high water mark for every luxurious option made available to the kind of older driver who wanted living room creature comfort in his automobile. These owners wanted plush couches instead of simple bench seats in a big car with a soft suspension to smooth out bumpy roads. Impys delivered this level of luxury-and then some-to their discriminating buyers. 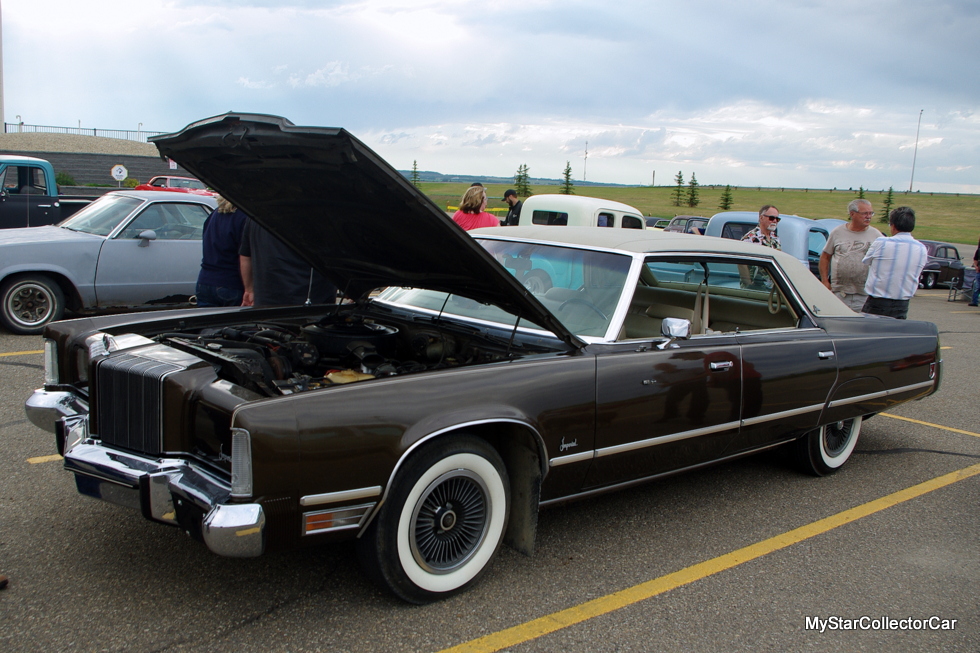 This brief history of the Imperial brings us to the subject of this story: a 1974  Imperial Le Baron reconfigured into a 5th wheel livestock hauler. We at MSCC encounter many automotive surprises every year during the car show season but nothing prepared us for the sight of a C-Body Mopar re-purposed to haul horses in a 5th wheel trailer.

Its current owner is a long time hot-rodder named Stan Norem, but Stan was not the guy who built this unusual horse hauler. That honor goes to its previous owner and Stan is now the official spokesman for the Imperial, along with the title of its biggest fan.

Stan purchased the car from an estate sale after he was drawn to the Imperial’s unusual look with its trailer hitch positioned behind the rear window. The hitch was attached to a beefy addition to the frame that supports the hitch weight of a 5th wheel trailer.
One of the mods to the Imperial is actually a subtraction because the car no longer has its original trunk support springs. The springs were removed to prevent the trunk from accidentally springing open while hauling a trailer. Stan opened the trunk and then let it slam down to a shut position while cautioning us to stand back when he let go of the heavy trunk lid. We determined very quickly there was no chance the trunk was ever going to fly open with that kind of weight behind it because it slammed like a guillotine. 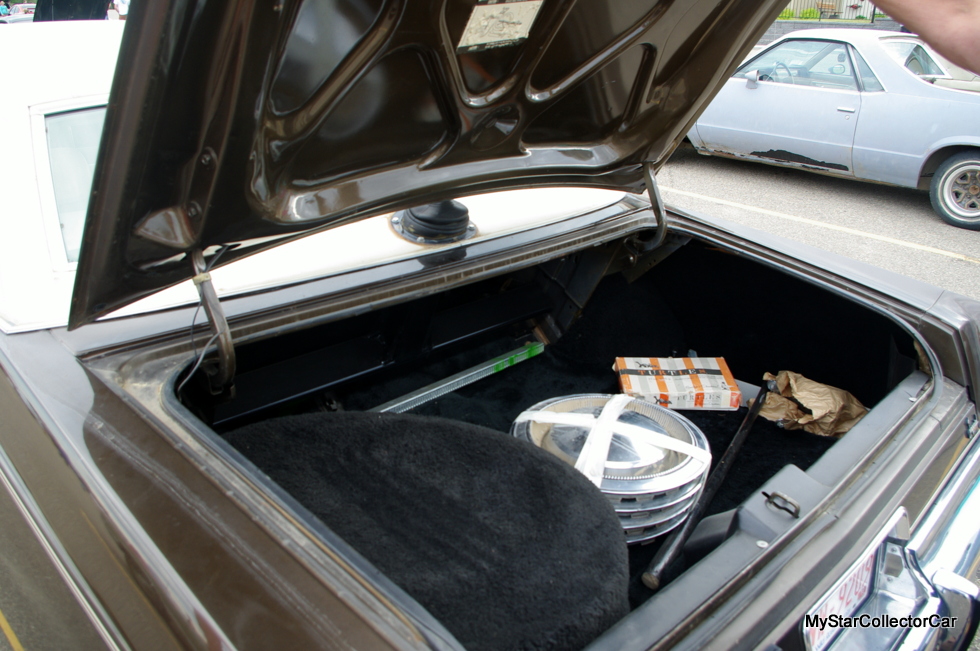 The former owner decided to add full gauges to the Impy so he could monitor the engine under the load of a full horse trailer. The switch from people-hauler to horse hauler meant the Impy was subjected to a tougher work day and passed with flying colors.The big 440 engine helped the Imperial keep its end of the bargain-even a 440 built for cleaner air and less horsepower like a 1974-era Mopar big block. 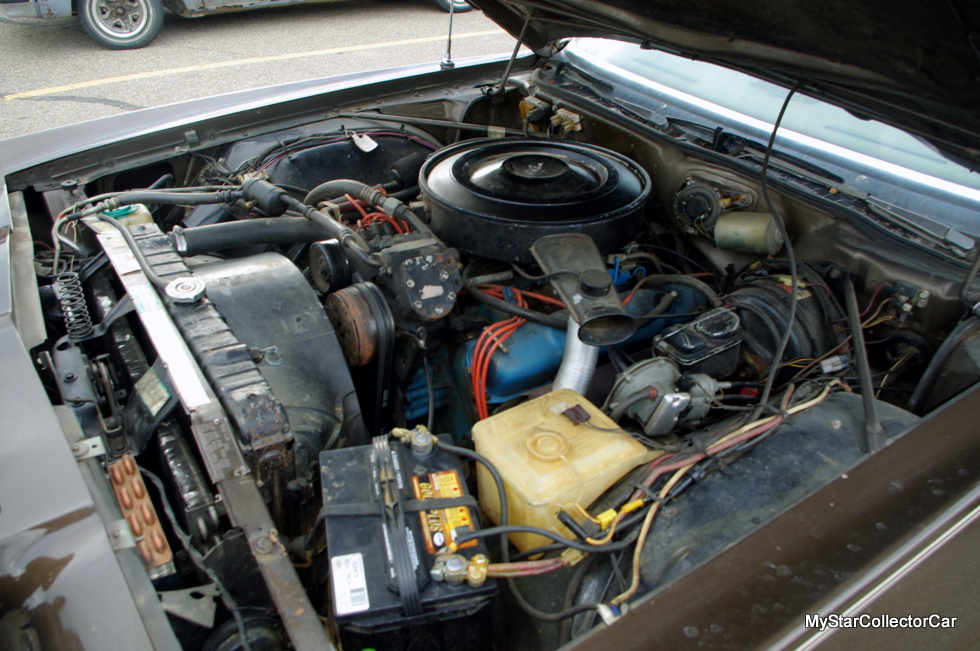 The unusual Impy has been a big surprise to Stan because it runs down the road as smoothly as it did in 1974. It has 116,000 miles on it and the original survivor Imperial and Stan said it “still drives down the road like sitting in a living room chair”. 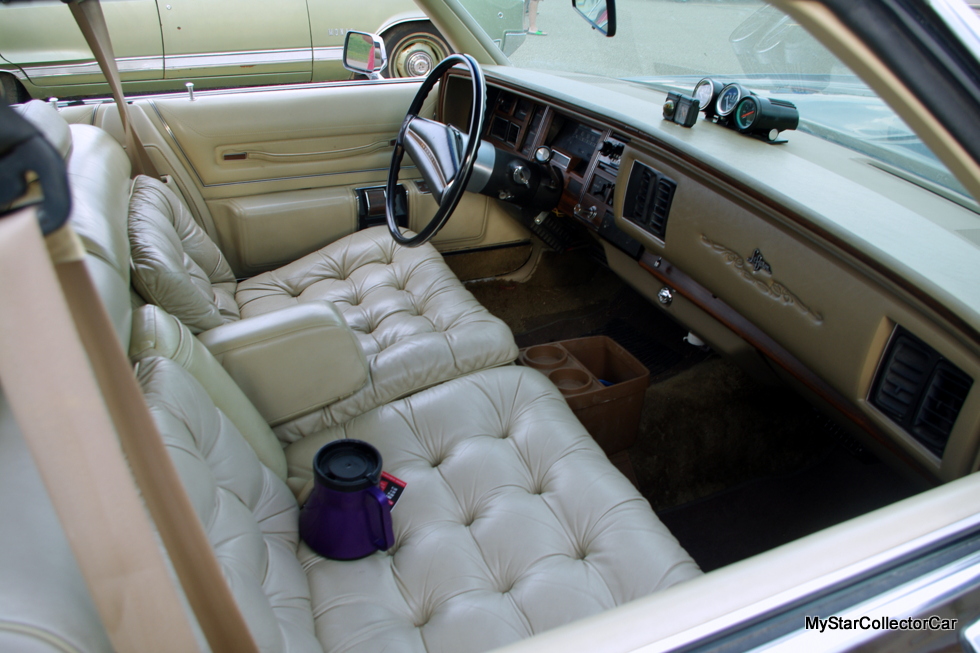 Stan will lighten the load for his Imperial, but he still plans to haul a few ponies in a trailer behind the Impy just for the novelty. 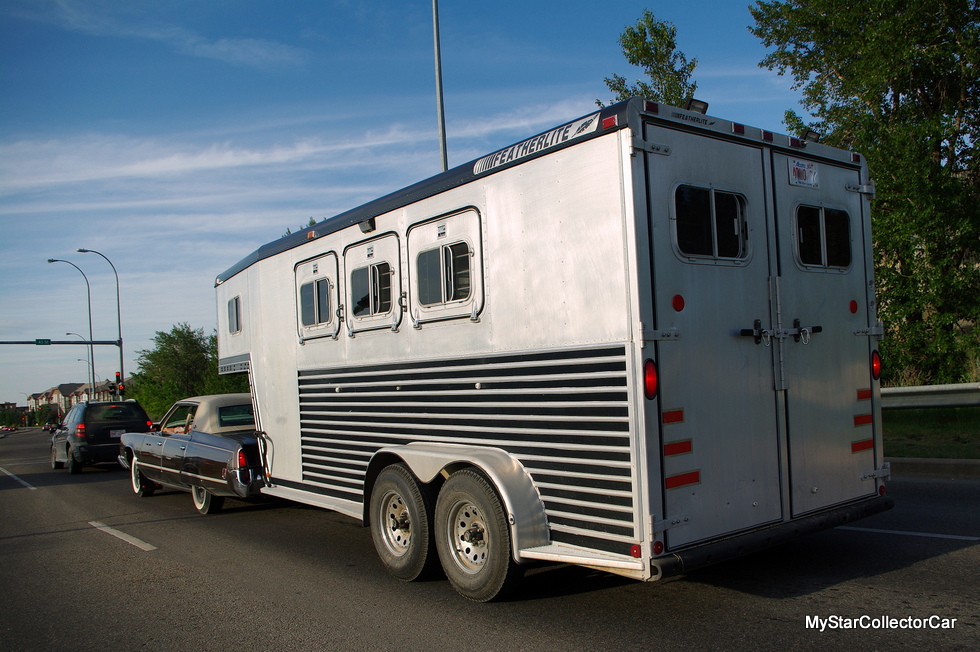 Plus he know the Impy can handle the work.