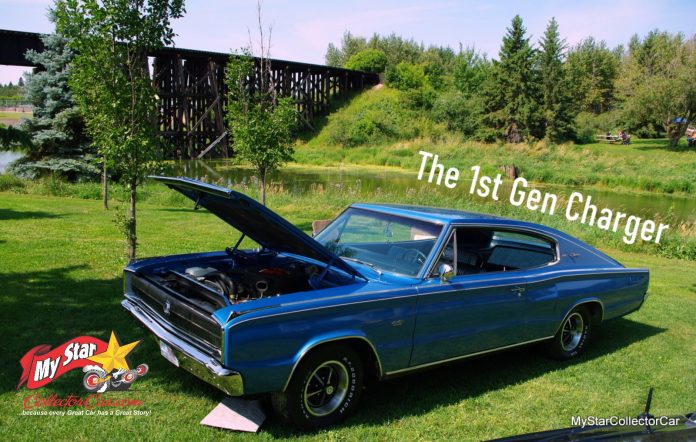 The debut of the Dodge Charger during the 1966 model year stirred up a hornet’s nest in the domestic car industry, mainly because people either loved it or hated it.

Dodge Charger love would eventually come in generous portions with the introduction of the famous 1968 Charger, a car that shared its style with no other car in the Chrysler stable, but the 1966-67 Charger models were clearly a close automotive relative of the Dodge Coronet.

The close resemblance between a 1966-67 Dodge Coronet and a Dodge Charger worked against the car because the car industry had seen this movie before when the Rambler Marlin debuted in 1965 and was clearly a fastback version of the Rambler Classic.

The exaggerated C-pillar in the ‘65 Marlin gave it a fastback style, a feature that allowed American Motors to jump into the fastback game on the cheap, so the 1966 Charger was immediately painted with the same brush because Chrysler also wanted a cool fastback model based upon a sedan.

The car’s fastback style on a conventional sedan was a jarring sight for the 1966-67 Charger’s many detractors, but we at MyStarCollectorCar viewed the car as a “What-if?” version of the Coronet. What if Mopar designers added a long, sloping C-pillar to an unlikely sedan like a Coronet and ran with it?

For MyStarCollectorCar, the answer is pure design magic because the fastback roof is a runaway winner on the 1966-67 Dodge Charger models. The elongated C-pillar makes the Charger look fast at a standstill in our opinion, while its big block options ran right up to the legendary Elephant Hemi and ensured the first-gen Charger was also lightning fast when it was not at a standstill.

We believe good style bones were already a fundamental part of the 1966-67 Dodge Coronet models, but the first-generation Chargers took that style to a higher level. Perhaps the best example of the first gen Charger’s superior style were its hideaway headlights because this unique feature was not found on a Coronet and truly enhanced the 1966-67 Charger’s Coronet-based front grille in a big way.

The striking look of the hideaway headlights front end on a first-generation Dodge Charger was a tough act to follow, but the car’s wall-to-wall taillights were able to hold their own in terms of unique style.

Dodge wanted to offer a car that was clearly a higher end sports car in terms of the domestic car market, so they built an intermediate-sized car that was larger than Ford’s Mustang and sportier than a Thunderbird, while offering enough bling and creature comforts to fit Dodge’s upper scale image in the Mopar family.

One of the more unique features on a 1966 Dodge Charger was its full-length center console that sat between front and rear bucket seats in the car. The console looked great but disappeared by the 1967 model years because it was a serious pain for rear passengers in the ’66 Charger. However, the elongated console was another very cool feature in the car.