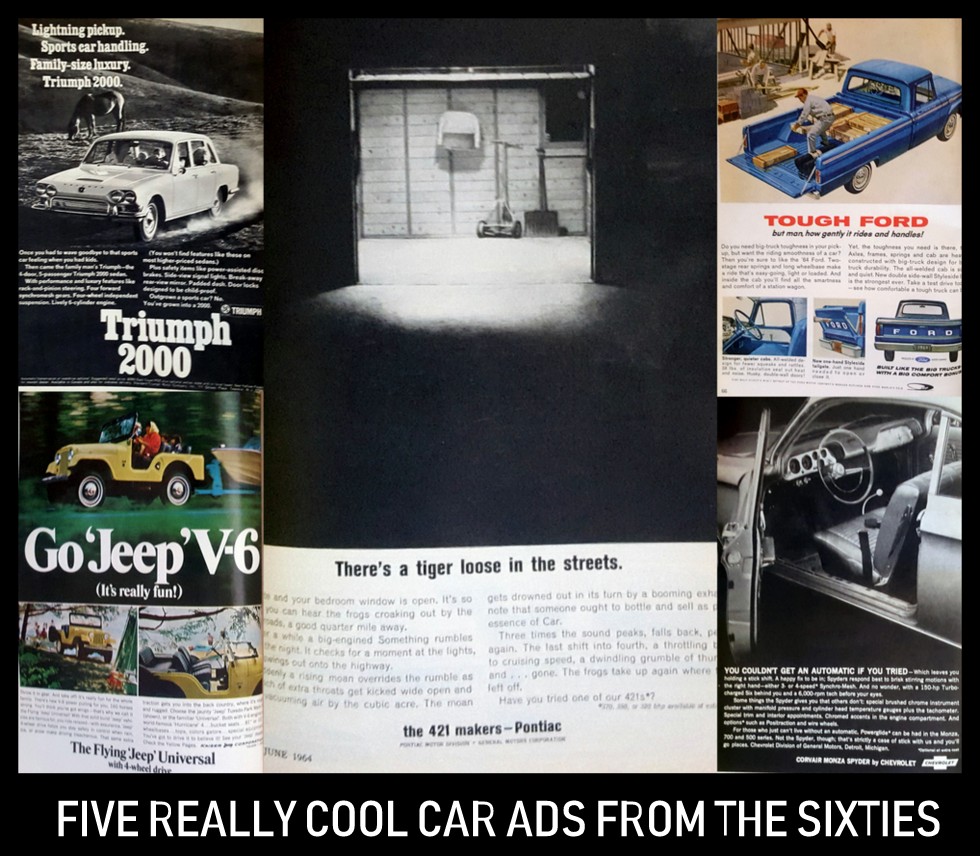 There are many reasons to love old car magazines.

The best reason is the old magazines were printed at a time when the cars were new, flashy and ready for the road during that golden era.

The cars were still free from the burden of future legislative overreach where bureaucrats and politicians joined forces to complicate the auto industry and suck the soul out of vehicles by the mid-1970s.

Yet another reason to love old car mags can be found in their ads. These paper-bound static commercials in the magazines provided some of the more interesting elements of retro marketing because they were designed to stand out in a jungle of ads.

One of the examples that caught the attention of MyStarCollectorCar was a Pontiac ad because of its bold but subtle title with an empty garage backdrop: “There a tiger loose in the streets”.  The ad wanted to set the mood for any Poncho equipped with a 421 big block engine so the copy below that empty garage included a message of raw untamed power: “Something rumbles by in the night”. 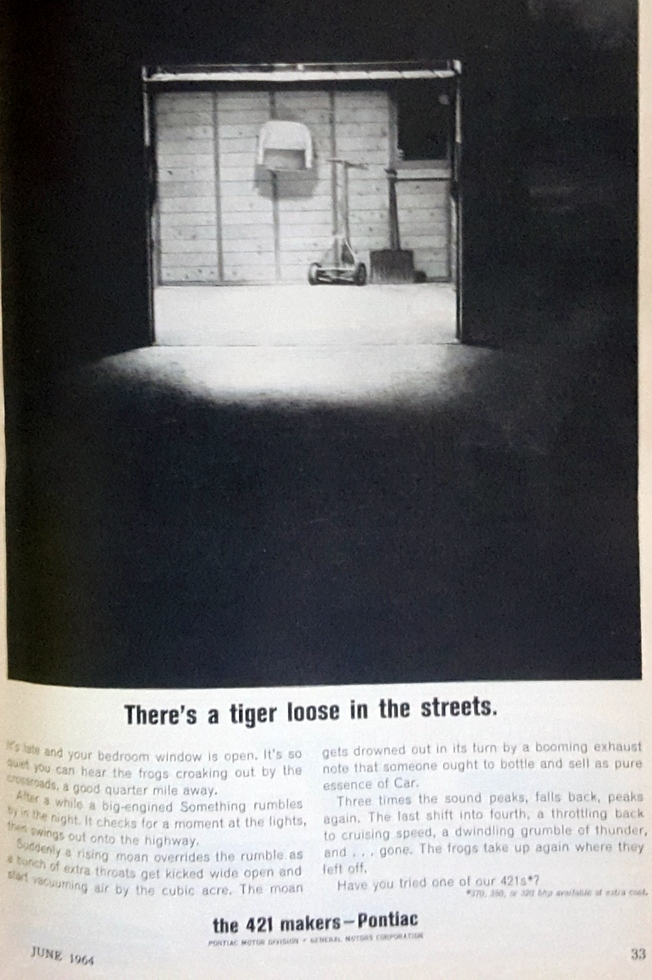 The entire message in the ad emphasized brute force channeled through a four-speed manual until the fast-moving Pontiac disappears into the night. The bold type at the bottom of the page says it all: “the 421 makers-Pontiac”. It does not get much cooler than this car ad from a 1964 car magazine.

An ad from a 1967 car magazine caught our attention for an entirely different reason here at MyStarCollectorCar because it featured an unusual four-door sedan from a British company famous for its two-seater sports car models. The car in the ad was the Triumph 2000 sedan. 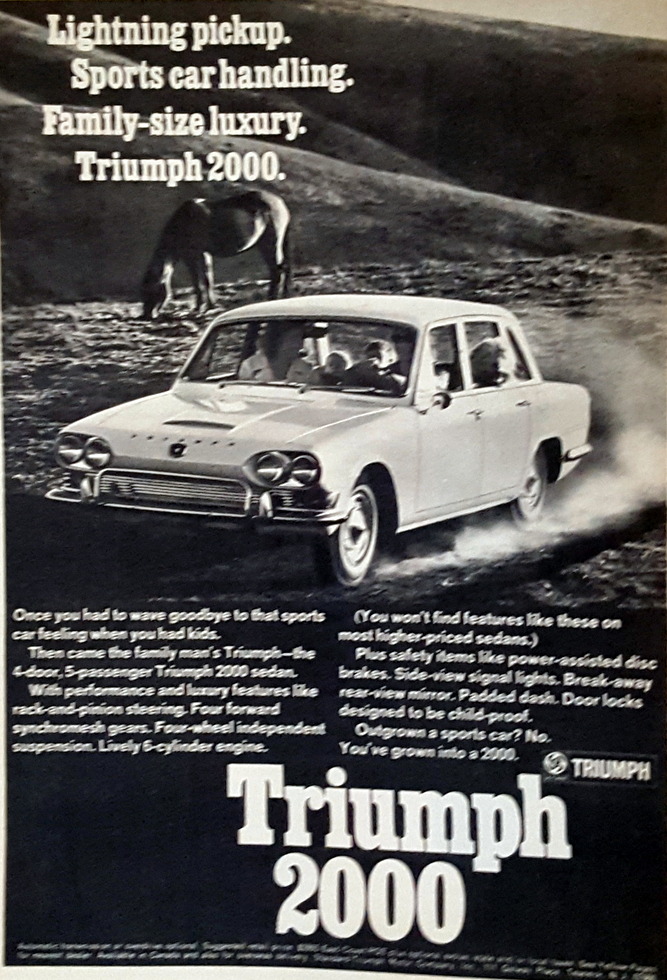 The notable Brit car maker wanted to link their practical mode of transportation directly with its sports car heritage so their Triumph 2000 ad emphasized its ability to offer a sports car in four door sedan drag: “Outgrown a sports car? No. You’ve grown into a 2000”, according to the copy in the ad. The message required a massive leap of faith for potential buyers, but it was a very cool marketing approach to a brand new vehicle from Triumph.

Another 1964 car magazine ad emphasized the rebel who was offered only a manual-stick shift 3 or 4-speed choice for his Corvair Monza Spyder: “You couldn’t get an automatic if you tried.” Today’s younger drivers may be appalled by a car that required minimal hand/foot coordination to move it forward, but the manual-only transmission was a big selling point for people other than Ralph Nader who were interested in the unique car. 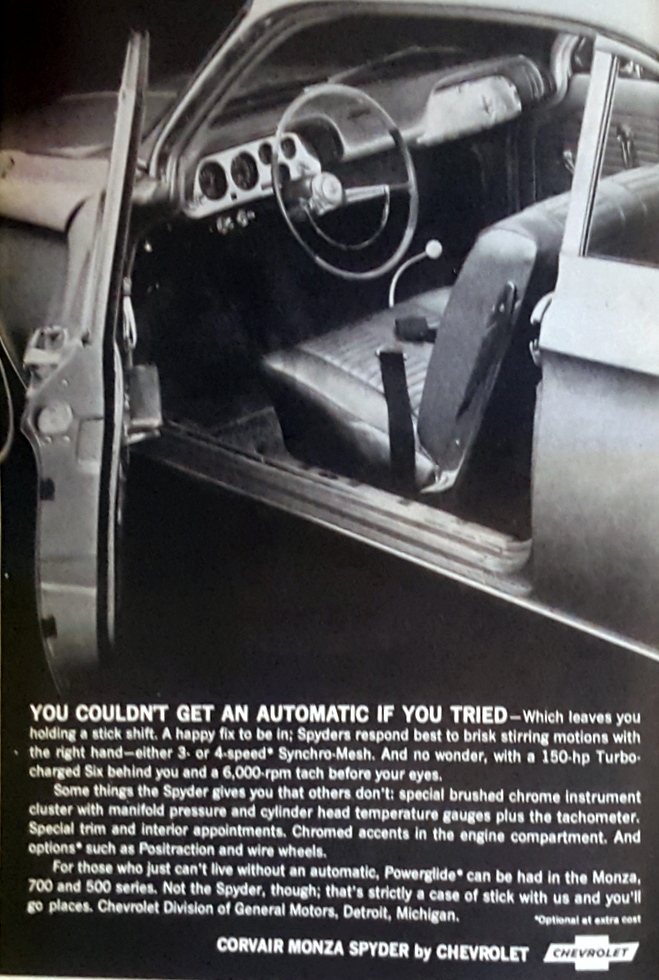 A truck ad headline from the same magazine as the Corvair was also got our attention here at MyStarCollectorCar: “Tough Ford”.  The pickup was positioned in a construction area where it delivered a load of material to builders because trucks from this era were very common on job sites and not Park Avenue.

The twist in the Ford ad was found underneath the ‘Tough Ford’ headline: “but man, how gently it rides and handles!” Ford wanted to link its hard-working pickup with toughness and comfort, so the ad copy suggested it had the “riding smoothness of a car”. The balancing act between work vehicle and family vehicle was also equalized by the Ford truck’s interior which had “all the smartness and comfort of a station wagon”, according to the ad. 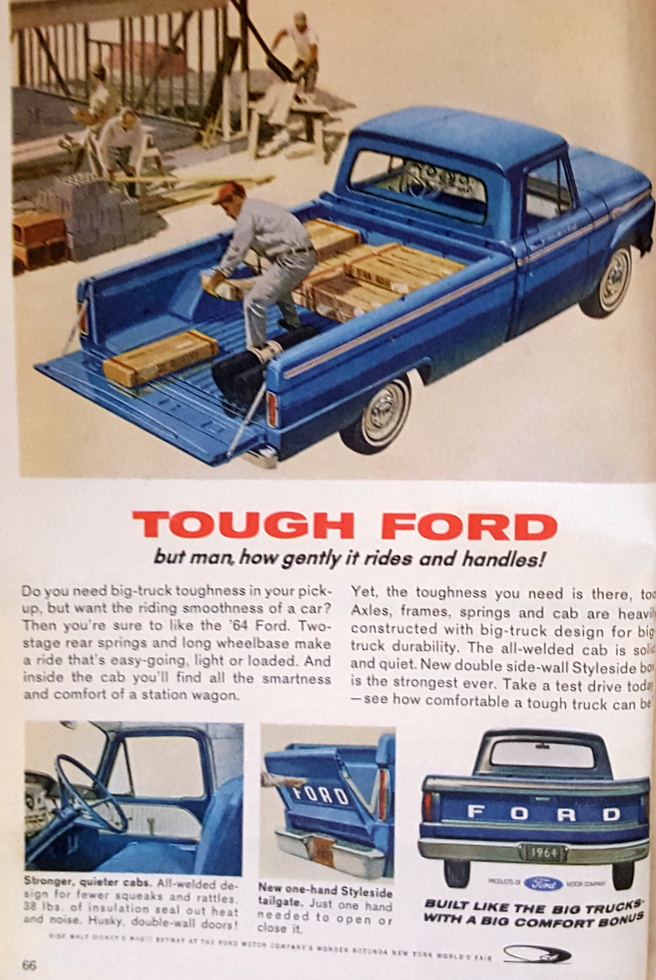 Ford sold their final point with this bolded, capital letter message: “BUILT LIKE THE BIG TRUCKS WITH A BIG COMFORT BONUS”. The movement toward today’s very comfortable pickup trucks was already afoot in ’64.

The fifth and final addition to our cool ad list is a Jeep ad in a 1966 car magazine. The ad focused on the fun side of Jeep ownership and included outdoor pursuits via its illustrations. The main photo included a family towing a boat to emphasize the Jeep’s ability to handle big loads with its V-6 engine.

The copy in the ad sang the virtues of Jeep ownership as a sensible and powerful vehicle that could use its powerful engine and four-wheel drive to get owners “into the back country”.   The Jeep Tuxedo Park Mark IV in the photo may not have the best name for a rugged and simple 4×4 with a storied past in World War Two service, but naming the Jeep model was not part of the job description for the ad people. 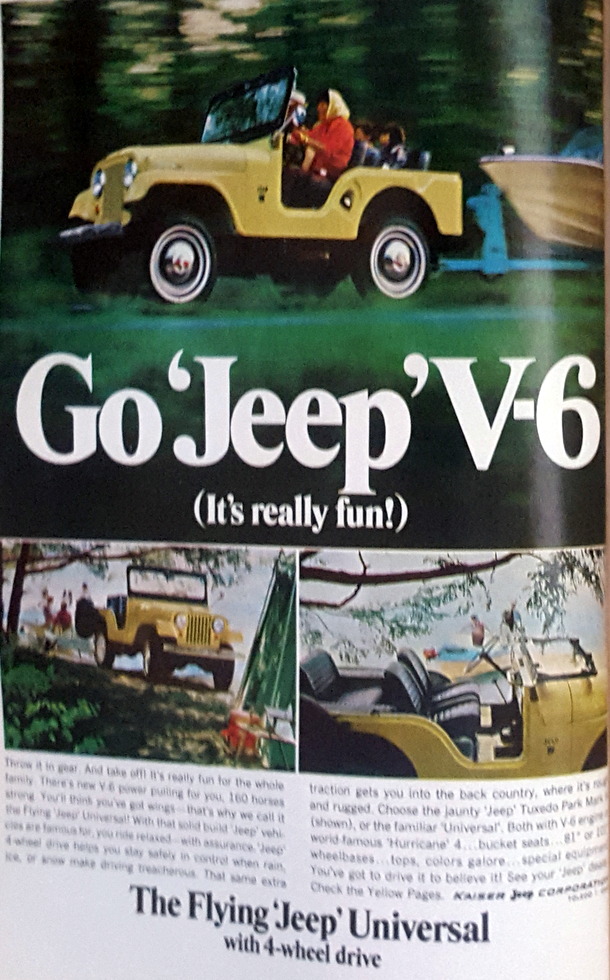 Instead the marketing people concentrated on the Jeep’s many assets as a people-hauler, including its “bucket seats…..81” or 101” wheelbases…..tops, colors galore….special equipment”. There was much to celebrate about the new 1966 Jeep from the nice people at Kaiser-Jeep Corporation–and their ad people did their level best to capture that vibe in a full page ad.

The ads in all for all of the aforementioned vehicles from the past were clever and cool in our opinion here at MyStarCollectorCar.