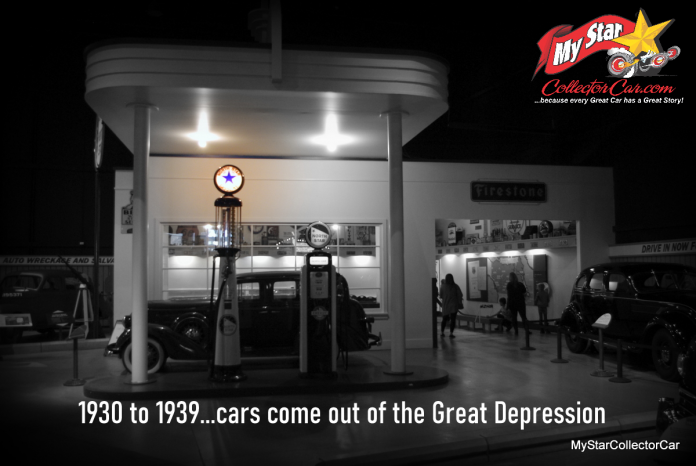 We at MyStarCollectorCar are not experts on prewar cars in any accurate sense of the term, so we seek out knowledgeable sources to fill in the blanks on them.

We have tapped into the sizable data base inside Wayne’s cranial storage facility to answer many questions about prewar iron over the past 12 years and he has identified the lion’s share of them, including many vehicles rusting in pieces. Wayne’s identification process has even included rust buckets buried in mud that camouflage most of their former factory glory.

Wayne is definitely more accurate than a Google search, plus he does not lead us down a garden path of bad guesses made by morons with access to the internet when he identifies a pre-war car for us.  Just for the record, Wayne was born after the end of World War Two, but he was always fascinated by pre-war cars over the years.

However, we can ballpark the time frame behind vintage rides built during the 1930s because there were radical changes made to vehicles during that tumultuous decade-even without contacting Wayne.

The first item on our agenda is the basic design of most domestic cars built in 1930. Most of them were similar in style to vehicles built during the Roaring Twenties and showcased their straight-line design with an ample supply of brick-like 90-degree angles that killed any sense of aerodynamics in the cars.

The overall style of vehicles built in 1930 was guided by this 1920s straight-edge automotive approach, but few people wanted to drive one into a Dust Bowl windstorm at the time.

The domestic automotive style changes began to appear a few years into the 1930s when the typical North American car’s A-pillars (their windshield pillars) were given a slight slant in an effort to make the vehicles the more aerodynamic on the road. The tilted A-pillar was a subtle change, but it marked the start of massive changes for domestic cars during the Thirties.

By 1935, many domestic cars were curvier and more rounded than their 1930 predecessors. The car designers gave their straight edges a bit of a rest and ran with a new style that looked fast at a standstill in the mid-1930s. The newer cars also ran faster than early 1930s cars because more of their owners chose V-8 engines and OHV (overhead valve) six-cylinders to hurtle them down the road in their more aerodynamic outer skins.

The close of the 1930s offered a completely different automotive style compared to the start of the 1930s. The 1939 domestic cars were even curvier than the mid-1930s cars-let alone the early 1930s vehicles.

The radical automotive style transformation during that decade included 1939 models with smaller and curvier headlights that were adjacent to sleeker front fenders, along with some cars with headlights built right into the front fenders.