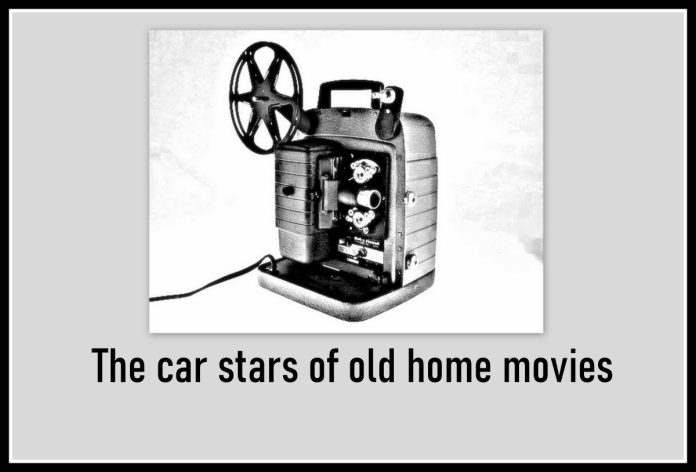 In the old days of capturing life moments, Dad would drag out the old Kodak camera and film the kids around the Christmas tree—that’s why every home movie looks the same.

A good example is this ’64 Dodge Polara. The couple is clearly on a Florida honeymoon so what better way to roll than a classic Mopar from the 60s?

That’s a real look at how we travelled back in the 60s—complete with a period correct motel.

There’s another vacation film from the late 60s where you can see two dressed-up wagons parked just off the beach.

They’re both high-end models because you can see the wood grain panels so you know this is not a barebones Chevy Biscayne or Ford Custom.

Farms were great venues for old home movies because there’s always an example of classic iron on a farm—then and now.

In this case, they’re working on a ’57 Ford 1-ton in the middle of winter. Farm vehicles had to work every day, regardless of how ugly the weather was outside. Nothing’s changed except there’s a better chance the guys in the movie would have a shop in today’s world.

You’ll see the occasional muscle car in an old home movie—in this case, the car is a ’67 Ford Fairlane GTA.

Who knew Dad drove such a cool car back in the Swinging Sixties?

Speaking of cool fathers, you can’t top a home movie from the early days when dad was clearly a street racer in his 1957 Mercury.

Apparently Pops took on all comers from Vettes to hot rods in his quest for speed—and it was all caught on 8mm film. The police had all the evidence they needed…if they had a projector.

There’s a mint ’55 Buick in another home movie. This is the typical family car you’d see back in the day because at the time it was a gently used four-door sedan—not a flashy convertible.

Those sedans were what you saw in most driveways because this was peak Baby Boom, so a convertible made no sense—unless you were a Hollywood star, and your kids were hauled around by a nanny in station wagon.

The final classic home movie example of classic old iron is a Pontiac Trans Am from a piece of 70s film. The owner was justifiably proud of his new Poncho because it took up most of the movie.

If he still owns it and if it still looks this good, he’s going to get back all the depreciation (times 10,000) in his magnificent ‘bird.