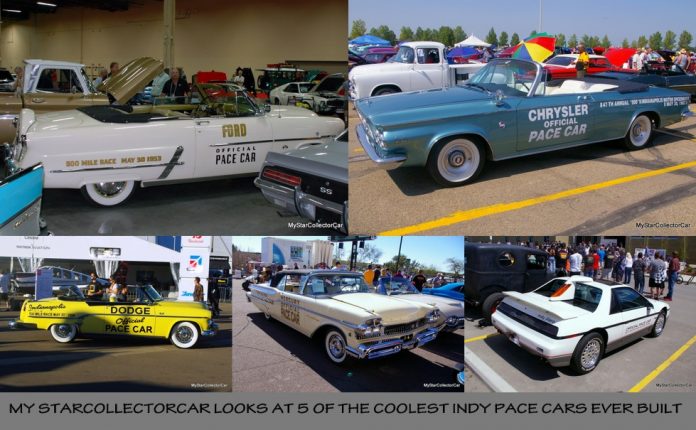 There was a time when the pace car at Indy was almost as famous as the winning driver.

That’s why Detroit duked it out for the honor of providing a pace car for the Indianapolis 500 then handed the car over to the winning driver.

Here are some of the coolest pace cars EVER BUILT.

Ford held the pace car honor for the 1953 Indy 500 and they came through with a ’53 Ford Sunliner Crestliner convertible.

1953 was the Golden Anniversary at Ford so this was a great year for the honor. They built 2000 of these 239 cubic inch Fordomatic-equipped convertibles and they sold them all in record time—in fact, dealers made replicas of the replicas because demand exceeded supply in a big way.

Dodge had the pace car honor the next year in 1954 and it was significant because this was the first time a Dodge led the pace laps at Indy.

The second cool Indy Pace car hit the track when Dodge chose a ’54 Royal convertible for its 500 edition (built 701 of them) and they backed it up with a 1st Gen 241 cubic inch Hemi coupled to a 2-speed automatic transmission. They tricked up the hemi with a 4-barrel carb on an Offenhauser intake so this Dodge could definitely handle lap speed.

The third Indy Pace Car in the lineup is the 1957 Mercury Turnpike Cruiser convertible and this was a perfect choice for the Space Race era in the Nifty Fifties.

Mercury built 1265 of these monsters and every one of them had the 368 cubic inch V-8 hooked up to a Merc-o-matic transmission. These were heavily optioned cars because this was dawn of the turnpike era so the idea was to drive coast to coast, drive fast and drive in comfort on the brand new Interstate highway system

This big Chrysler had a 383 V-8 backed up by a Torqueflite automatic transmission. This was the first time a 300 series led the pack at Indy and only the fifth time a Chrysler had the honor. They built 1861 of these convertibles and they a number of Pace Setter hardtops in addition to the soft-top version.

The fifth Indy Pace Car comes from an era two decades later.The 1984 Pontiac Fiero led the cars at the Indianapolis 500 that year and it’s still the only mid-engined Indy 500 car to date but the 2020 Vette might change that dynamic.

These Fieros were powered by a 232-horsepower, turbocharged 4-cylinder that propelled the little Pontiac up to a then record of 144 miles per hour average lap back in 1984. Pontiac built a mere 2000 Indy Pace Car Editions so they are pretty rare in the 21st century.

No matter what the decade—these Indy Pace cars are at the top of the heap at any car show because they are pages in the book of automotive history.