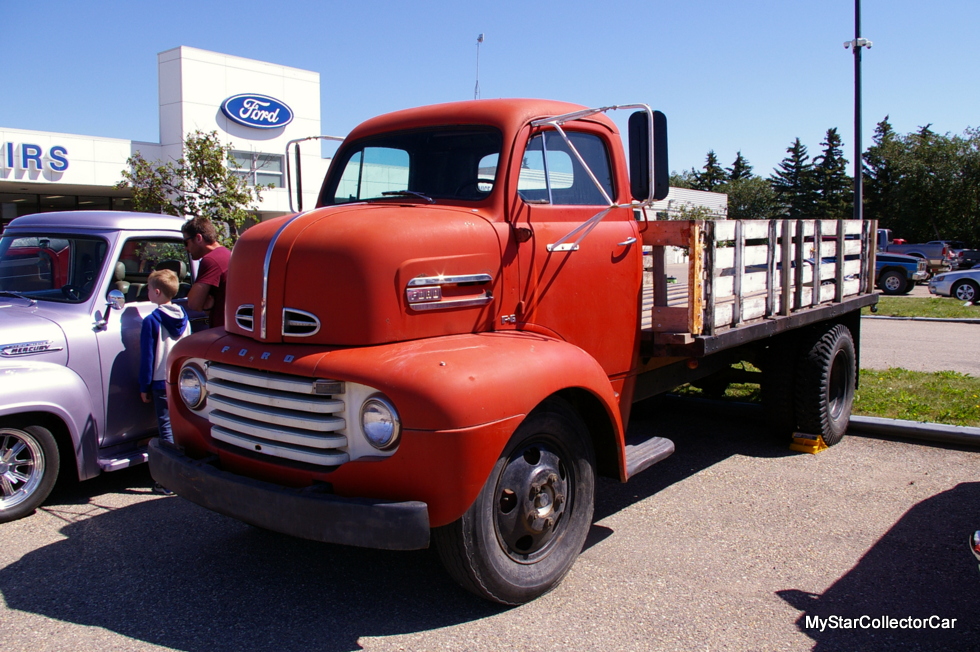 Ford was still in the early stages of its famous F-series truck program in 1950.

A large-and-in-charge 1950 Ford F-6 COE (Cab over Engine) is sure to become a conversation piece for owner Palmer Schuetzle on any occasion when he decides to show off his unique 2-ton truck.

Palmer was able to purchase the truck about 5 years ago when he was fortunate enough to find a seller who was willing to hold the truck until Palmer had an opportunity to have a look at the big Ford. 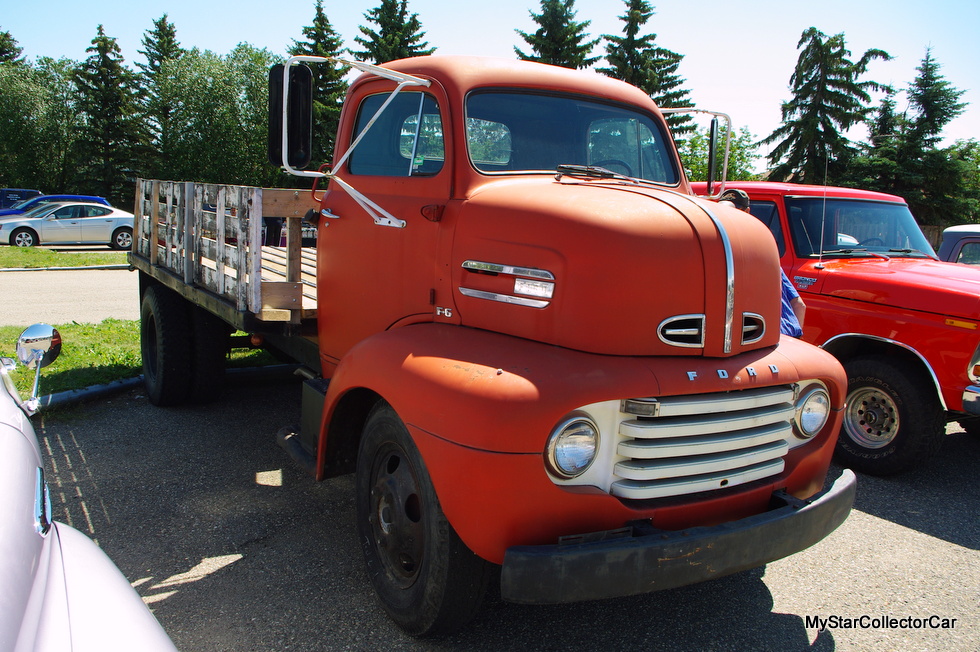 Palmer bought the truck in Edmonton, Alberta, although the COE spent most of its time with its first owner in Merritt, British Columbia. He believes the Ford F-6 was likely used as a hauler in the fruit industry because Merritt is located in the heart of that particular agriculture business (fruit-growing) in southern BC. 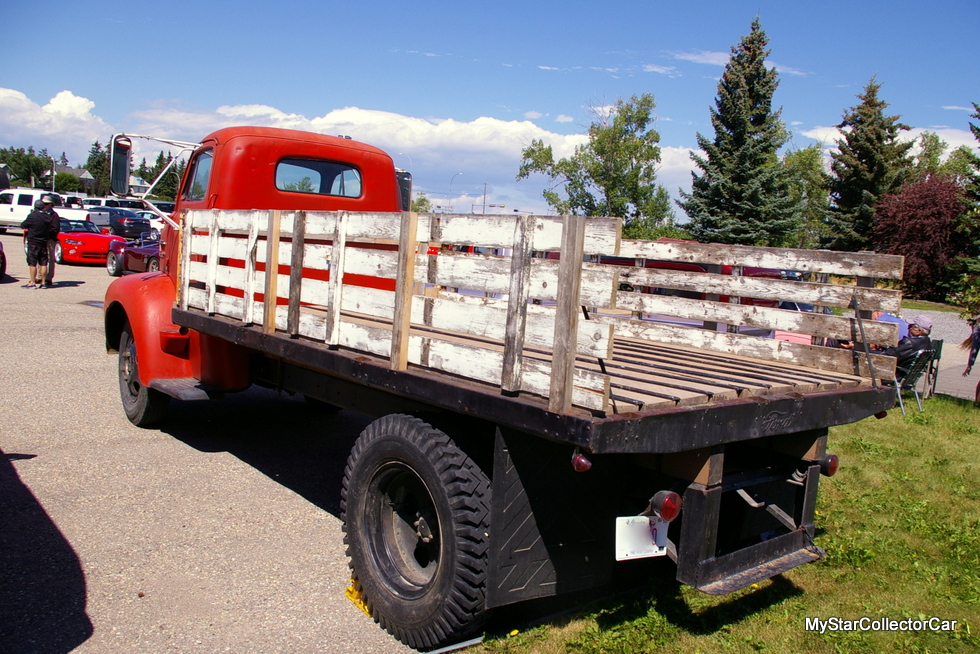 Palmer also believes his flat deck truck had a ramp system instead of a hydraulic hoist because of the fruit products. Incidentally, Palmer was able to custom-fit an old set of stock racks he used for a conventional style of farming on his place. 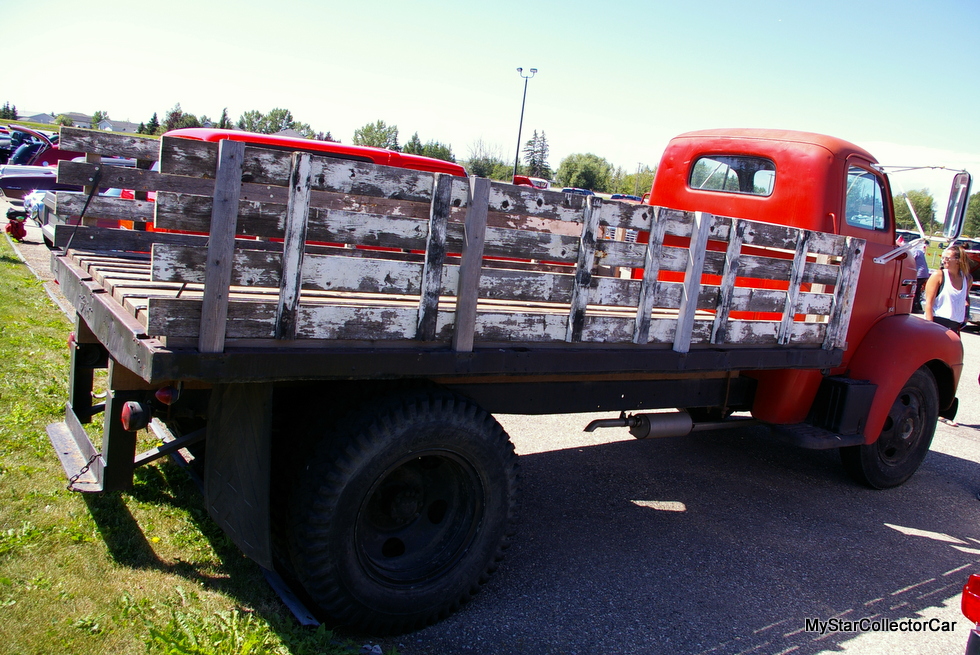 Palmer uses the truck for parades and wanted to protect his human cargo from harm with his racks. A bonus for the big Ford truck is the stock racks look very much like they belong on the former flat deck truck.

The Ford COE is essentially a stock version and still has its original flathead V-8 and manual 4-speed transmission under the cab. Palmer lifted the hood to show the minimal amount of access to the big Ford truck’s engine.

Palmer mentioned the straight cut gears in the tranny and how they required double-clutching to reach the next gear. In layman’s terms, that meant the driver had to hit the right RPMs in order to shift the transmission into the next gear-and a mistake meant he or she had to stop the truck and start the shift process again in first gear. 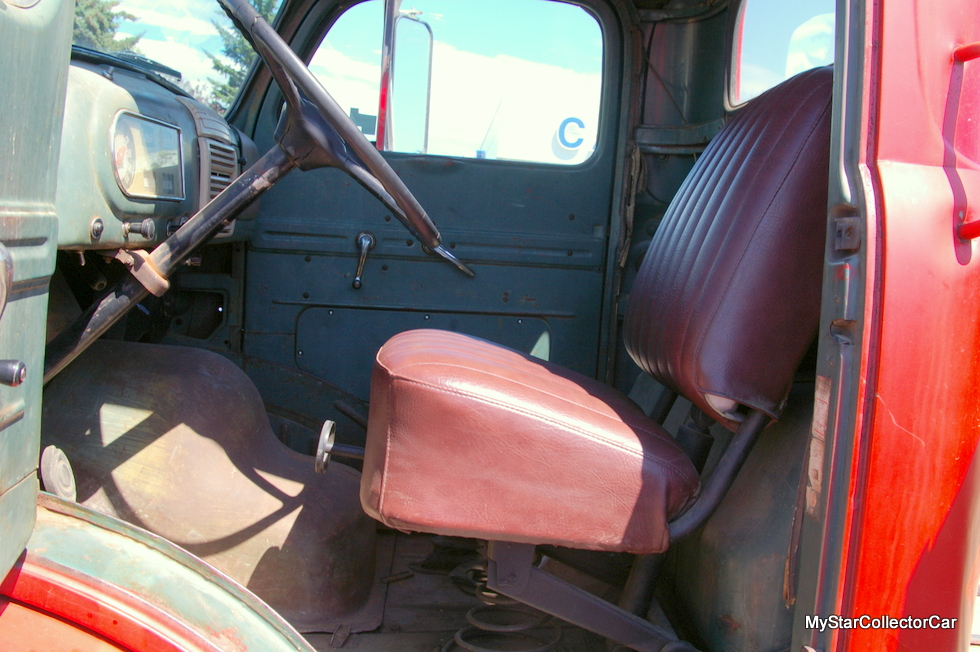 Palmer added that top speed in his truck was about 40 mph (roughly 70 km/h), so missing a gear could slow down the travel time even more for an unskilled driver. 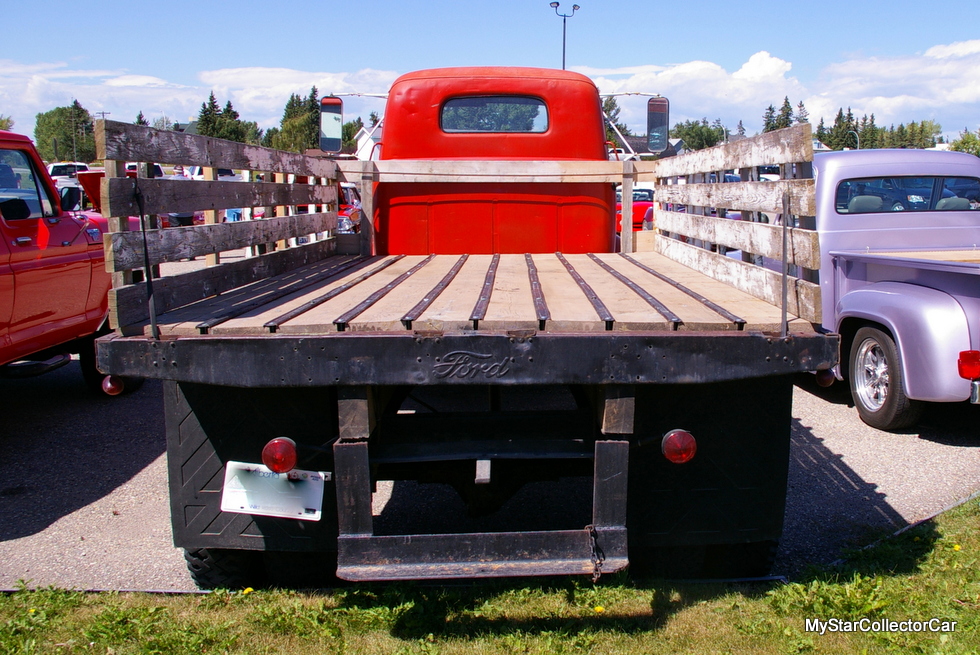 He also showed the unique position of the oil dipstick on the floorboard of the driver’s side in the cab. An oil level check also meant the person had to slide open the cover in order to gain access to the dipstick. 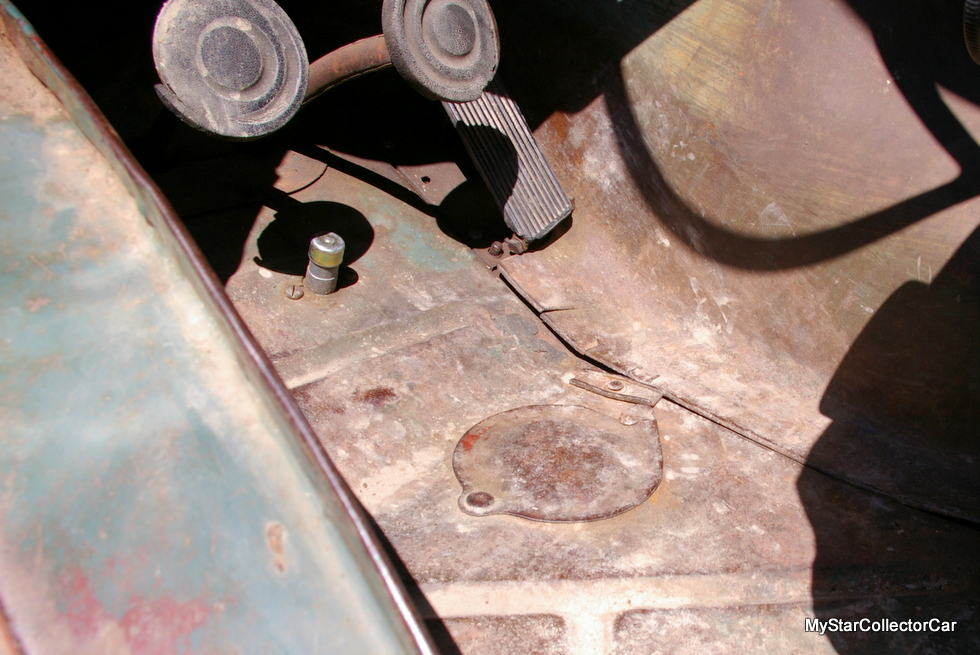 The truck’s 6-volt battery was located under the passenger step and required the removal of a protective metal cover to gain access to the battery. The COE’s passenger seat was removed from the truck, but Palmer had a game plan to install one in the future. 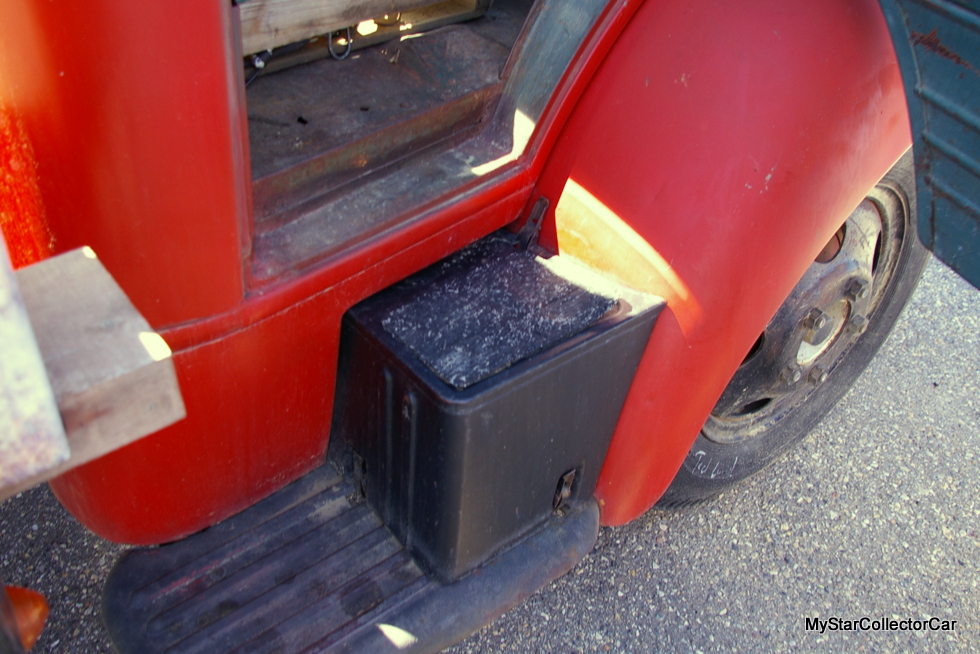 The 69-year-old truck is in remarkably good shape, given the number of decades since it left the factory and entered the world of hard work. Palmer respects its past and wants to maintain its originality as much as possible in the future, so he will maintain his big vintage Ford truck under the best possible conditions in the future. 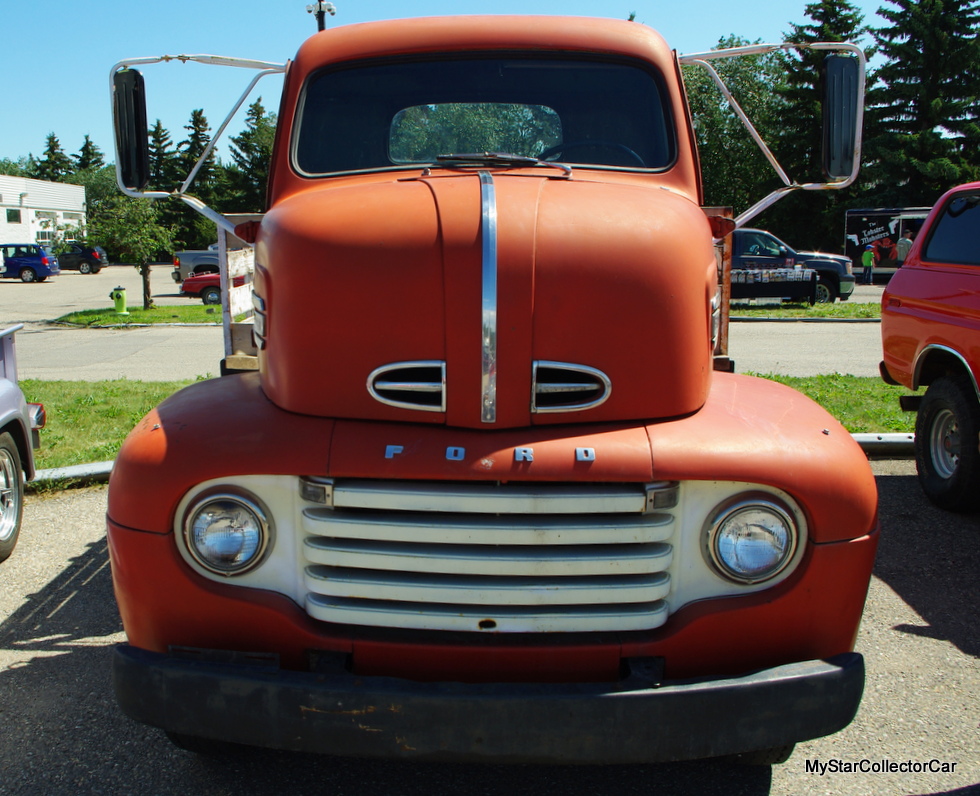 MyStarCollectorCar labels that news as a very happy ending to this 1950 Ford COE story.