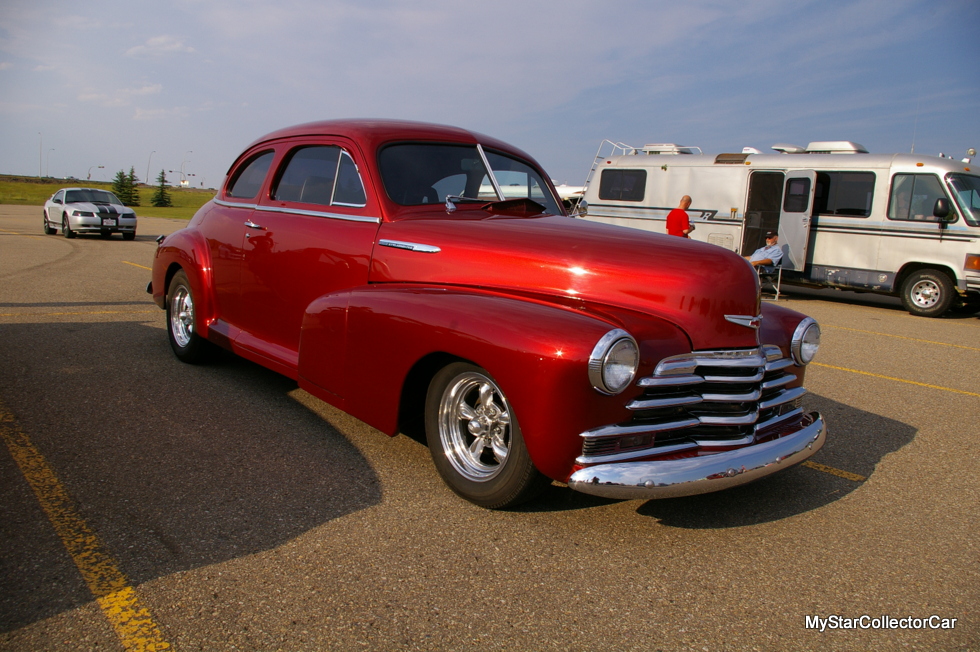 The 1948 Chevy was the last of the post-war models built by GM because the 1949 Chevys were a sleeker, more modern version that looked nothing like their 1948 predecessors.

A 1948 Chevy was a placeholder vehicle that looked a lot like the 1941 models because Detroit was gearing down from WWII and heavy involvement in the war effort.

Many car guys are drawn to the post-war Chevys because they are a uniquely 1940s-era ride and represent the era in striking fashion. 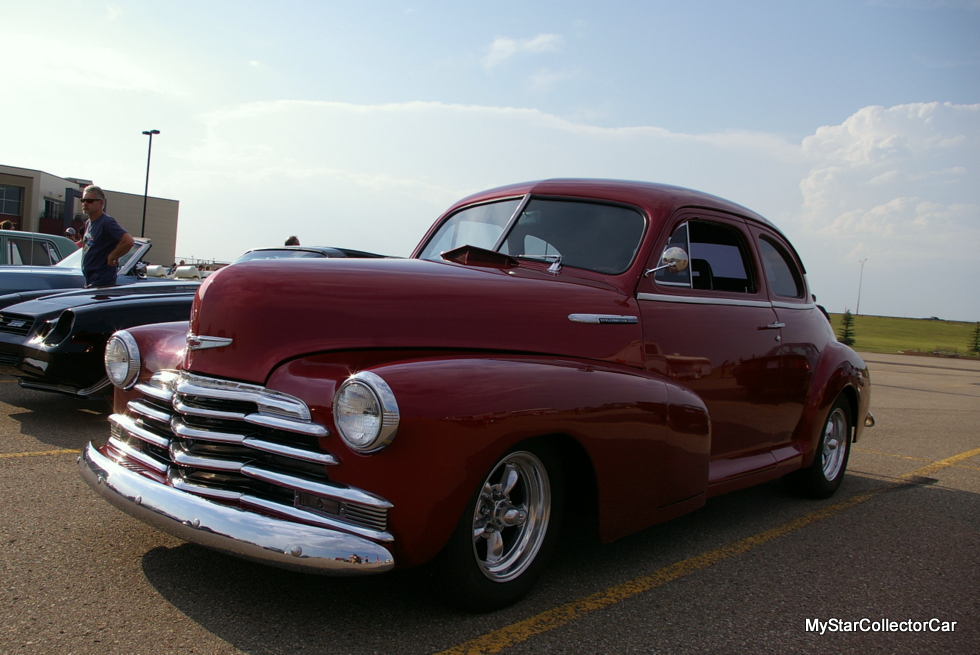 MSCC interviewed the proud owner of a 1948 Chevy resto mod that is the result of hard work on owner Calvin Coswin’s part. In fact, Calvin took four years from start to finish on his ’48 Chevy.

Calvin bought the car in 1996. The ‘48 Chevy two-door sedan was an unrestored survivor car when Calvin purchased the car. Calvin told MyStar his car “even ran, so I took it for one last cruise around the block before I began the work on the car.” 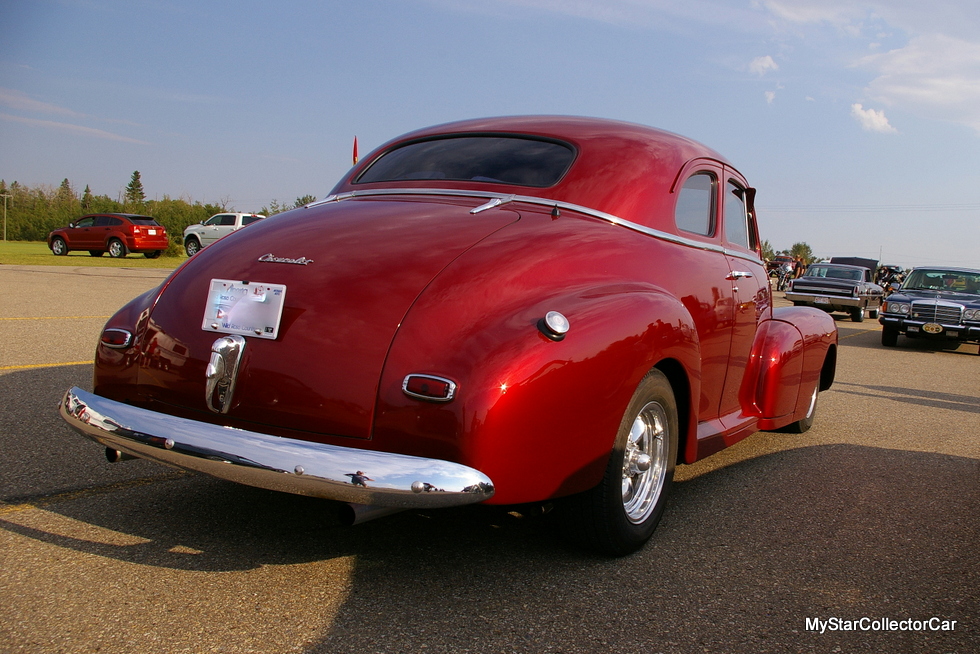 As mentioned, the Chevy transformation project took for years and Calvin wanted MSCC to know that he was able to reach the finish line with a little help from his friends. He even moved the battery to the trunk. 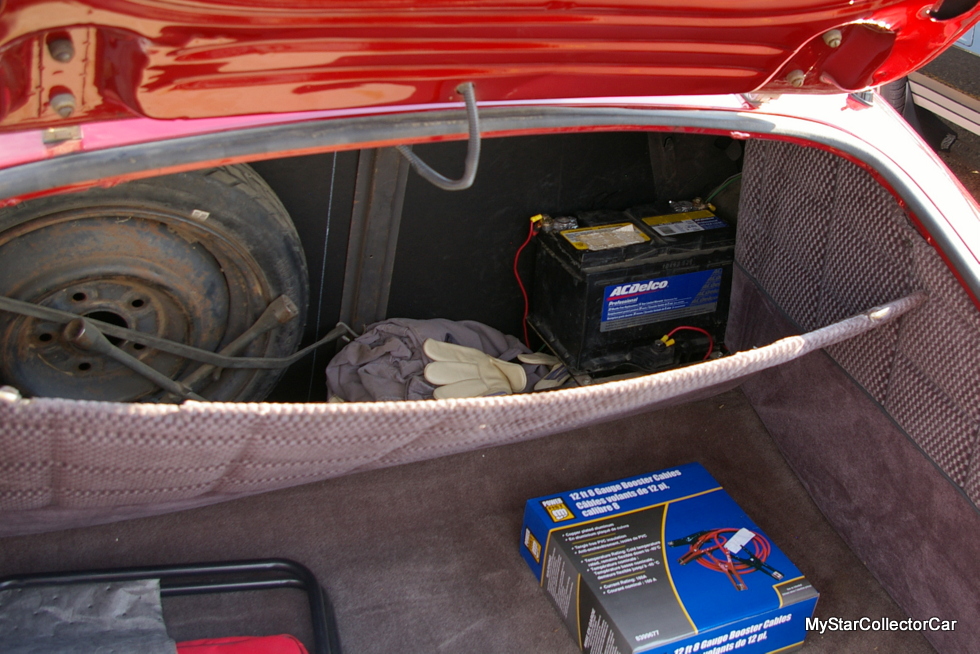 The original straight six and manual three-on-the-tree transmission in the 70-year-old car were replaced by a 350/350 Chevy small block/automatic transmission. 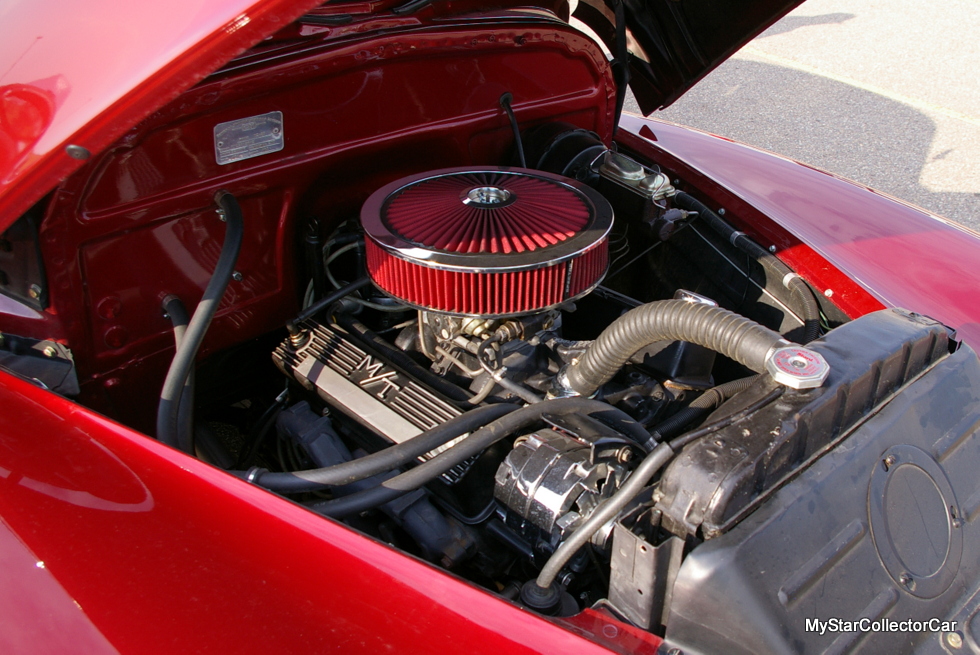 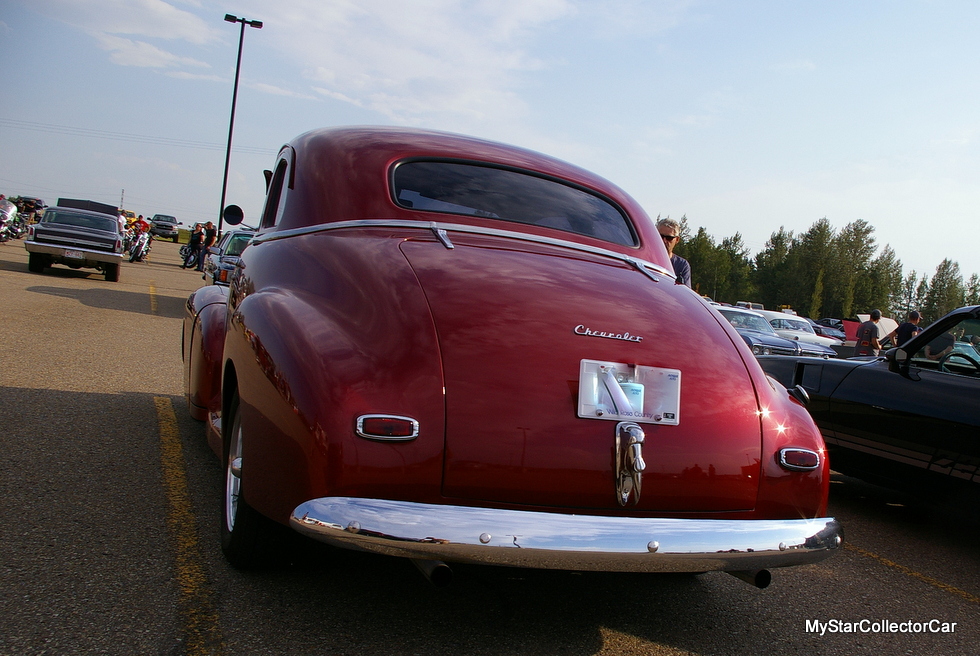 Calvin also added power steering and brakes into the mix, with a set of discs on the front.

The ’48 Chev now sports a 1947 front grille because Calvin liked the style of the earlier grille. He was able to custom-fit the hood and spent plenty of time turning the bolt-on front and rear fenders into one piece with some skillful welding. 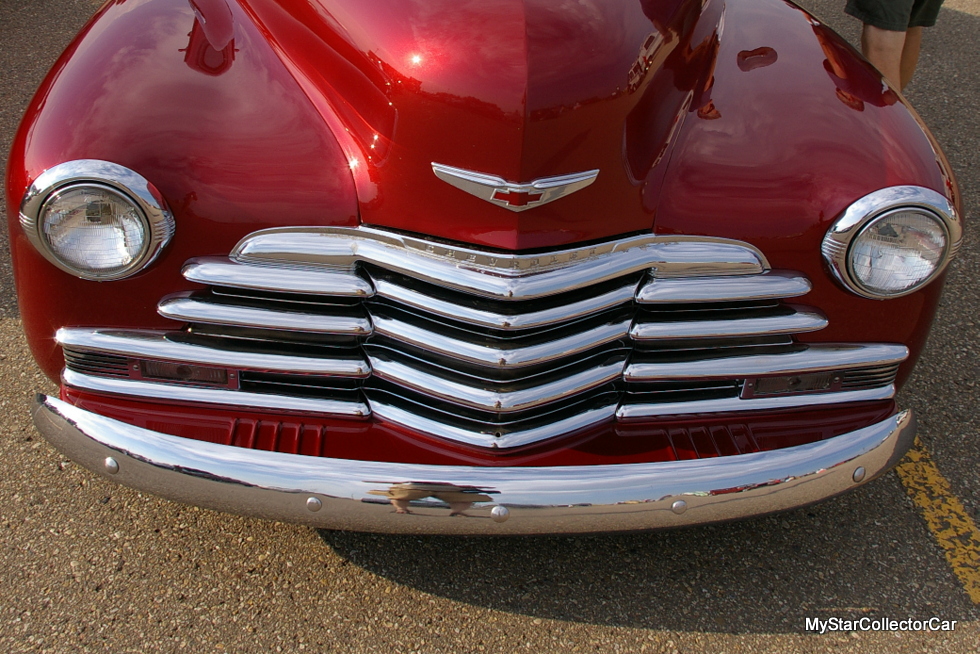 Calvin made his Chevy a little more comfortable with electric power windows that are engaged by the old fashioned manual window cranks on his ’48 sedan. 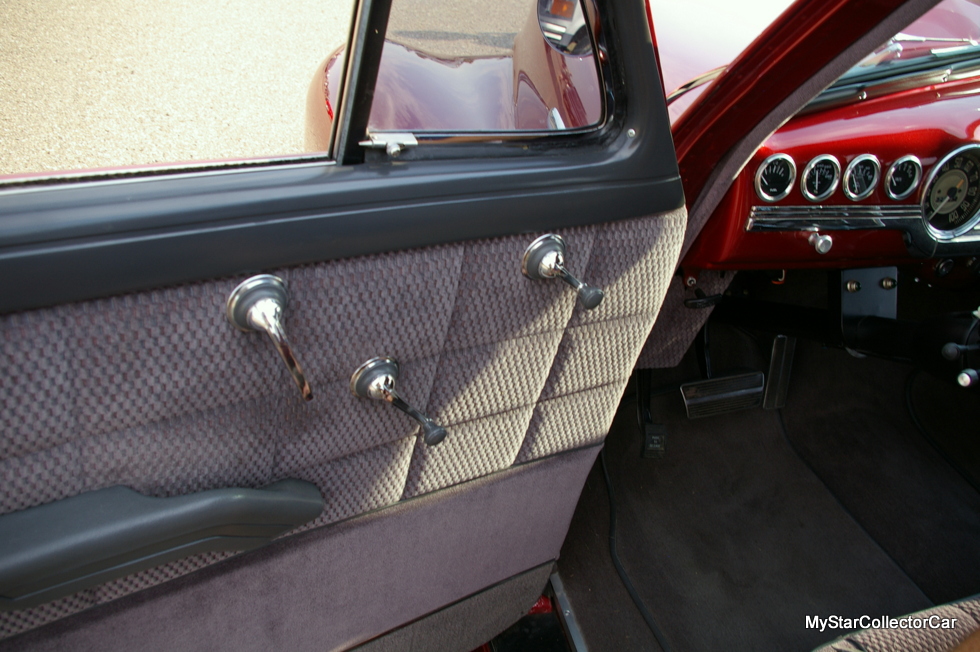 The only window issues left on the Chevy for Calvin are the manual cranks for the vent windows. Calvin has weather-stripped the vent windows in the closed position and installed stopper devices that prevent them from being cranked into the open position. 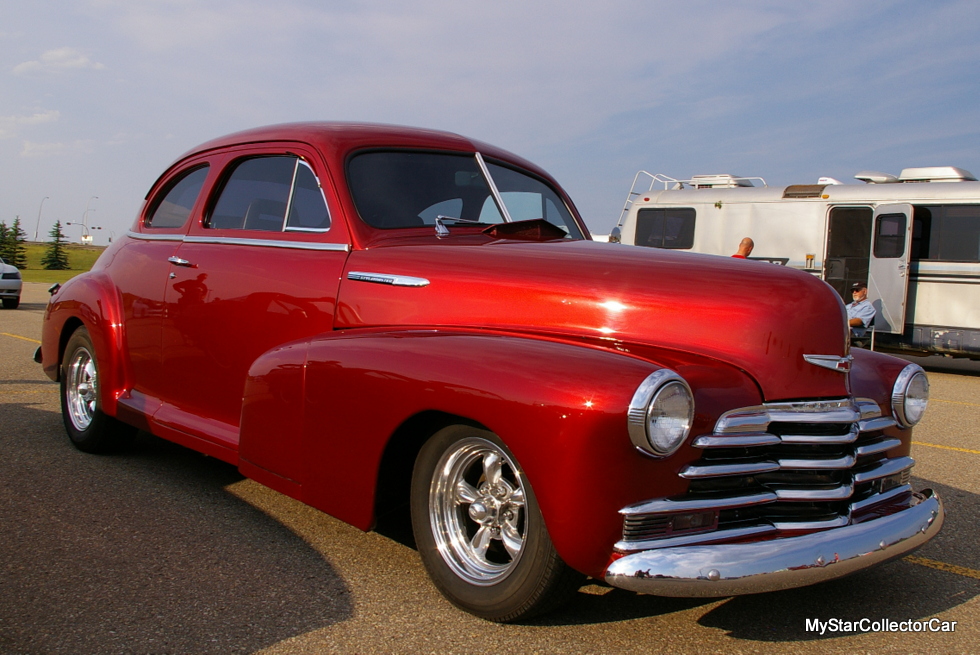 The newer power train in the ’48 Chevy means the car can go faster than its stock counterpart, so wind noise would be an issue with stock vent windows.

However, the car still uses its stock front vent to move air through the cabin. Calvin says the working front vent is “poor man’s air conditioning” and provides cool air for the car on a warm summer day when he has the windows closed and is doing about 72 mph (120 km/h) in it. 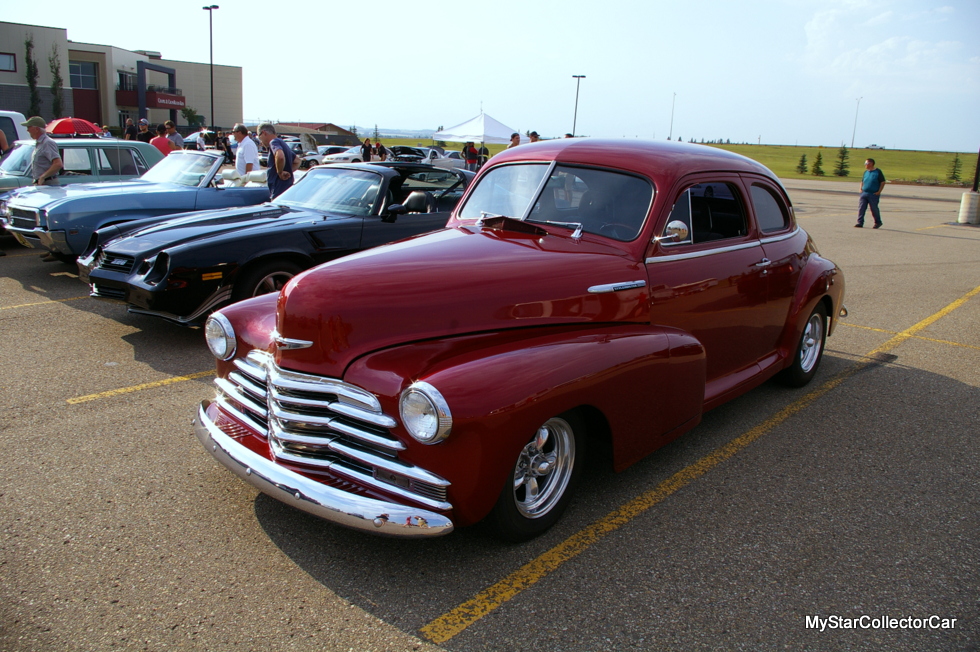 The vent is now operated by an electric motor donated by the hidden headlight system from a 1982 Firebird.

MSCC readers will note the car has been on the road for the past 18 years and Calvin has enjoyed thousands of miles behind the tilt steering wheel in his 1948 Chevy. 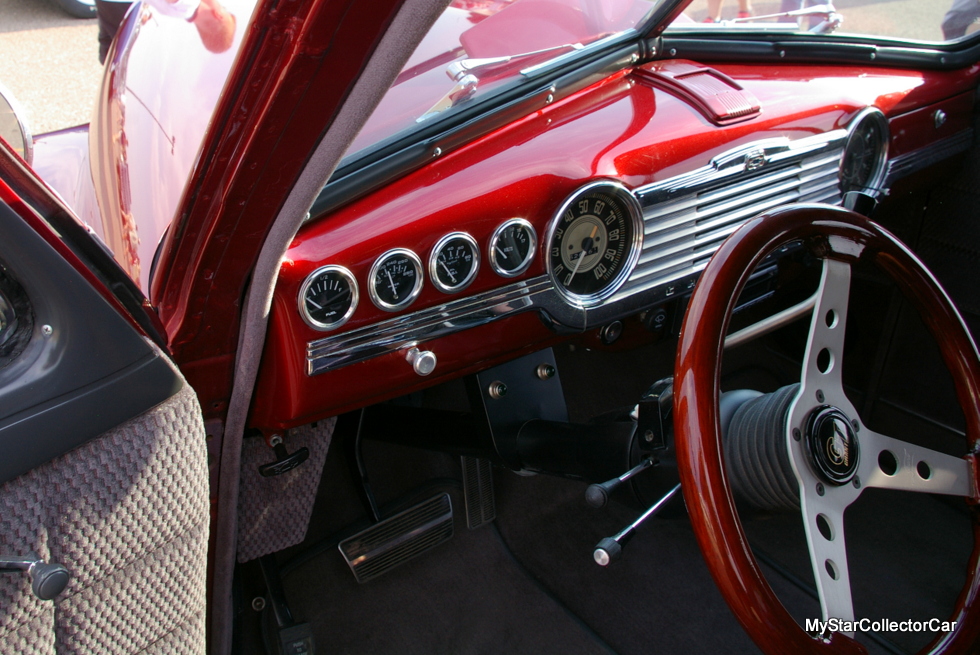 He has also won show awards over the years with his very cool Chevy.

The happy ending to the story is this 1948 Chevy resto mod has been driven to every destination by Calvin during that post-completion time frame.