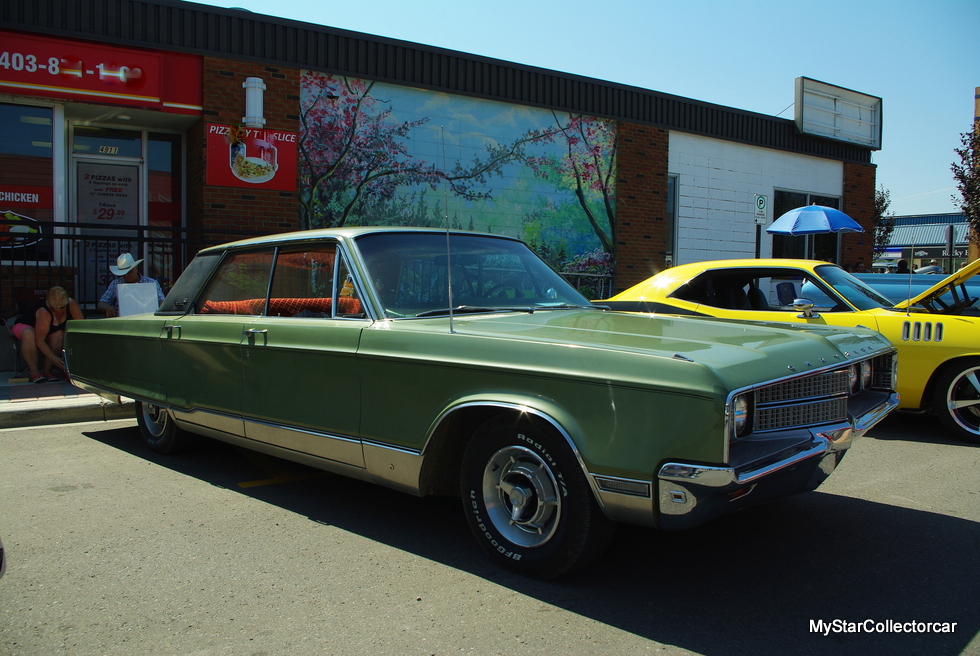 Any Mopar from the late 1960s with a factory 440 big block is worth its weight in platinum—if it’s a B-body Plymouth or Dodge.

The bigger C-body Mopars don’t get the same devotion and the sales prices reflect this reality but that doesn’t mean the big Mopes aren’t as interesting.

In fact, they often have a better back story than the standard “19-year-old kid pounds the liver out of a ’68 Road Runner” narrative —this ’68 Chrysler New Yorker is a great example. 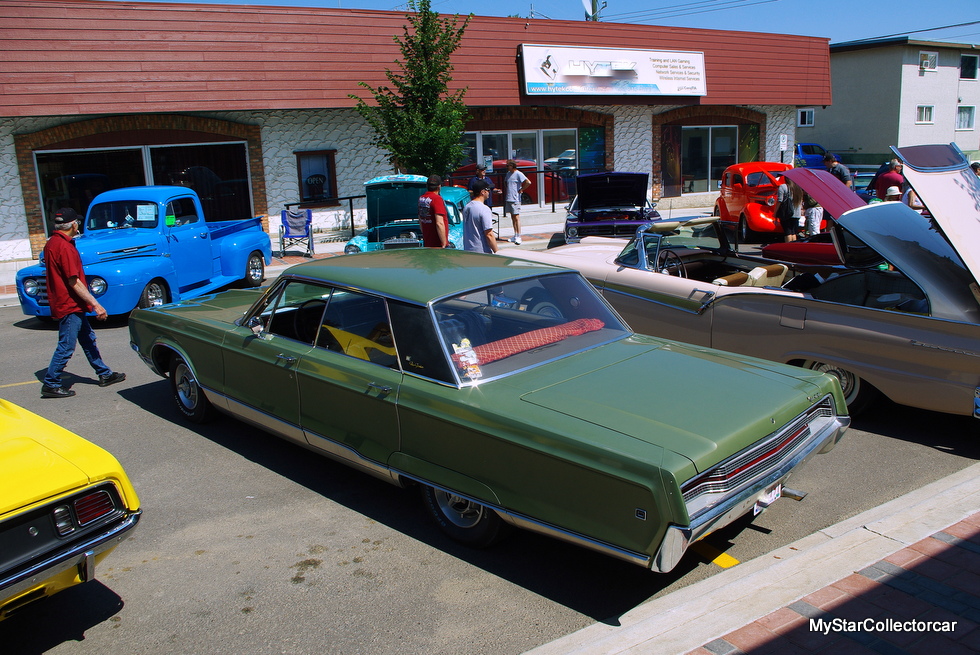 Barry Lutz is the proud second owner of this big C-body and he’s also the resident historian for this survivor. It was a documented 40,000-mile survivor when he bought it and it’s so correct it still has the plastic on the seats. 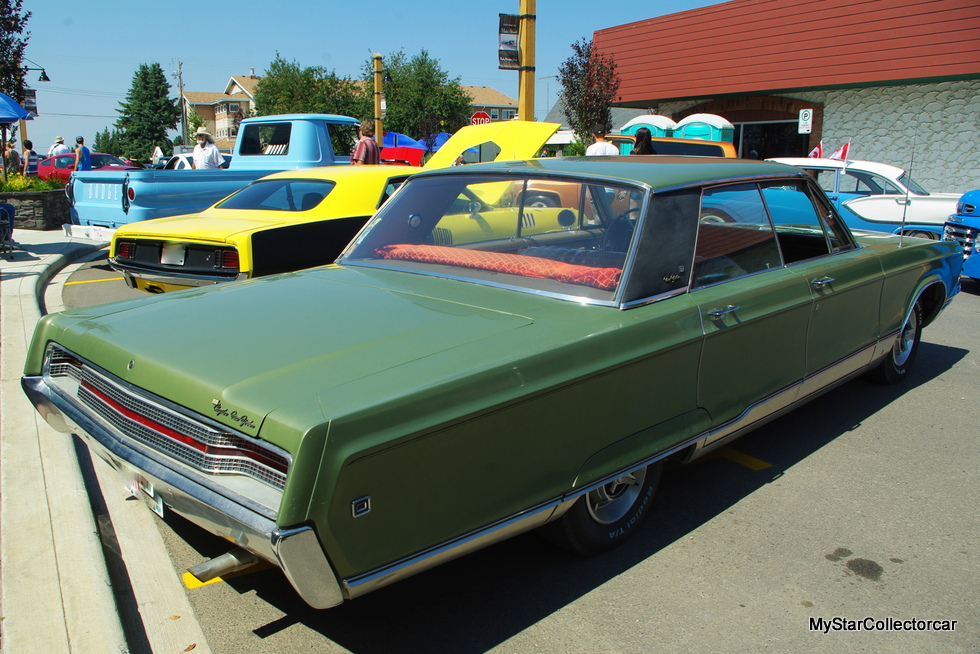 The late original owner (a buddy of a buddy) bought the car brand new from a British Columbia dealer back in ’68. Barry grabbed the car because his buddy said too many guys were “trying to steal the car” from the widow so he stepped in and made the deal.

There was no interest from the family in the car—Barry said the kids weren’t interested because they “never got to ride in it” but the National Park stickers on the car tell a story of at least a few family vacations. 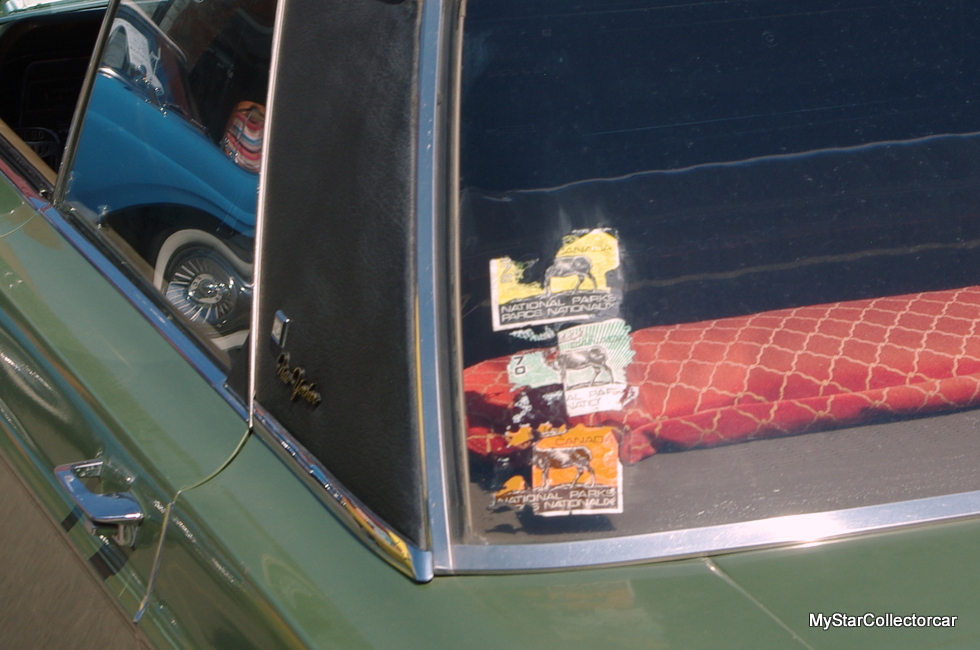 Barry said the widow “started choking up” when he backed the car out of her garage for the last time and she “touched the car and said goodbye old girl” so he immediately offered to sell it back in a year if she had any misgivings about the transaction. 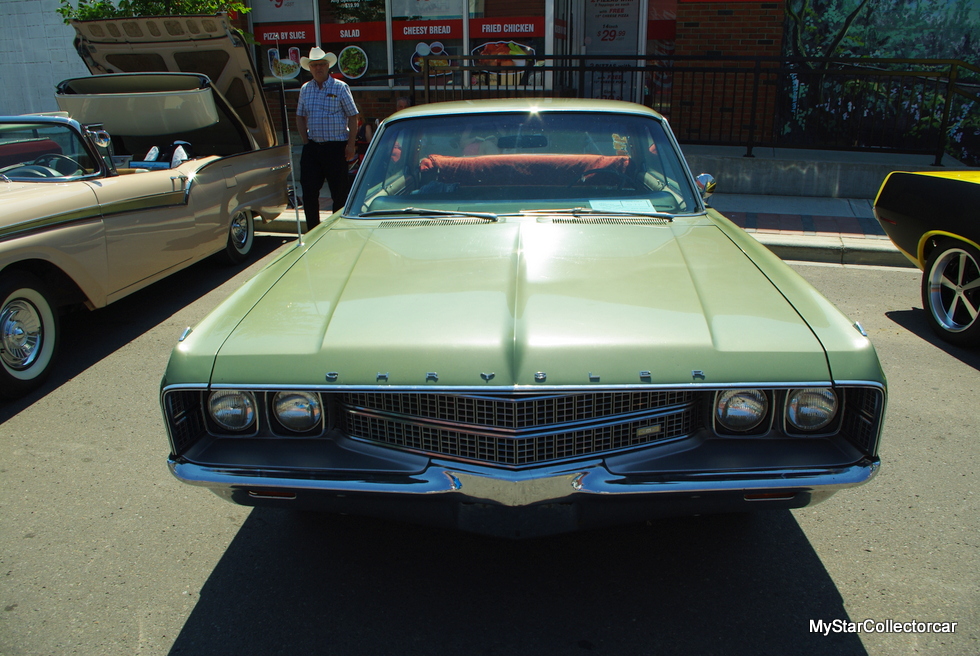 He also wrote her a letter to explain how he was going to treat the car and that was a huge moment for the widow. She wrote back to thank him for the letter and to confirm she’d found the right buyer.

Barry was a little mystified by the option list on this New Yorker. He believes it was a dealer order designed to keep the price down so they could have a lower-end New Yorker on the lot.

He said it “only has an AM radio and the only options beyond the basic ones were power windows, power antenna and rear defroster”.  He said the New Yorker package “just doesn’t add up” on this car.

It does have the big block 440 TNT engine and that’s where this New Yorker excels because it has mammoth power and decent gas mileage. Barry estimates the mileage at 22.4 (Imperial) miles per gallon and he bases that number on 10,000 miles (and counting) behind the wheel of this brute. 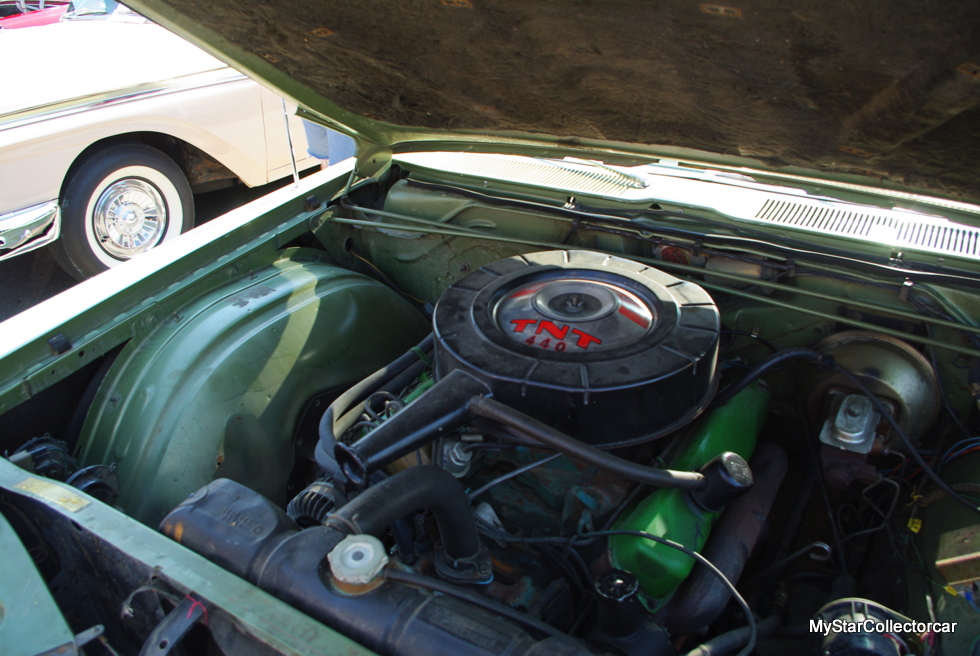 He runs it at 80 miles per hour and the New Yorker is barely working thanks to the highway gears but if he needs to make a pass the 440 has no problem taking it to another level. 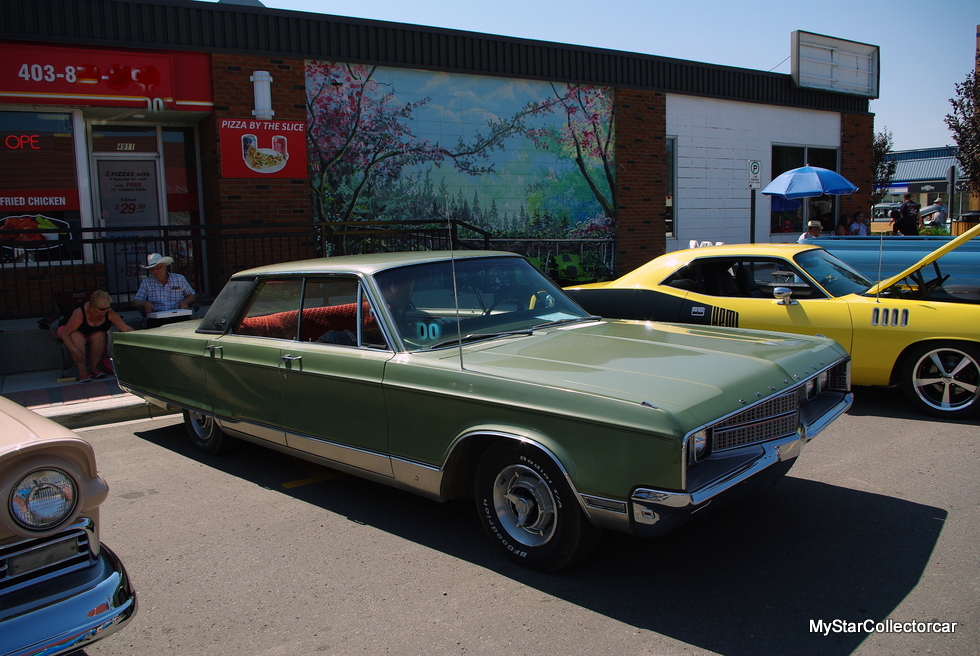 This is the ultimate survivor car—it even has a little house paint splatter thanks to the original owner but Barry wants to make some upgrades. It was a dual exhaust car from the factory but the previous owner “cheaped out” and put a single exhaust on the car when the original had to be replaced. 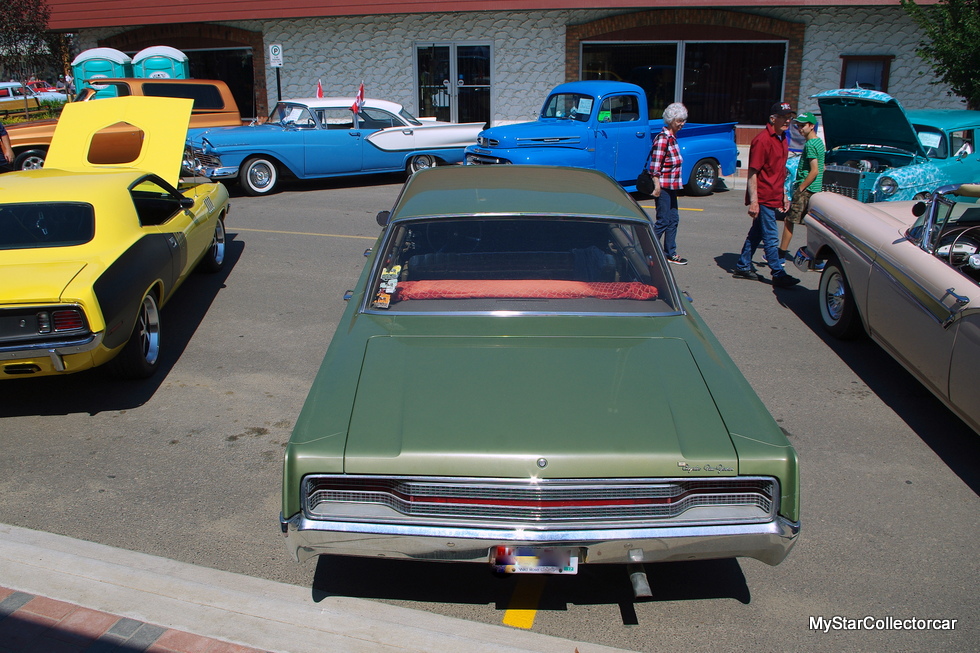 The first owner also put an add-on “Mickey Mouse cruise control” in the car and it doesn’t work so Barry is going to find a factory replacement. He’s torn over the plastic seat covers because they tell the true survivor story better than anything but they’re starting to yellow and split so he’s probably going to dump them and just take care of the pristine interior. 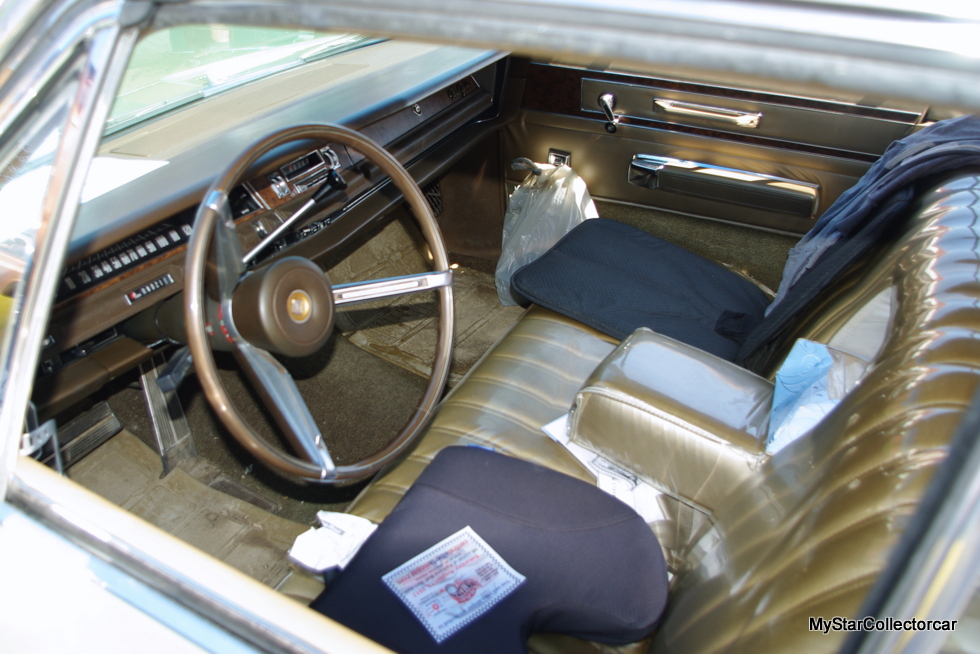 He’s already added radials because the original bias tires were old and bias ply—two good reasons to upgrade. One final thing–he wants to yank the engine, detail it and paint the valve covers the factory color because somebody painted them “John Deere green”. 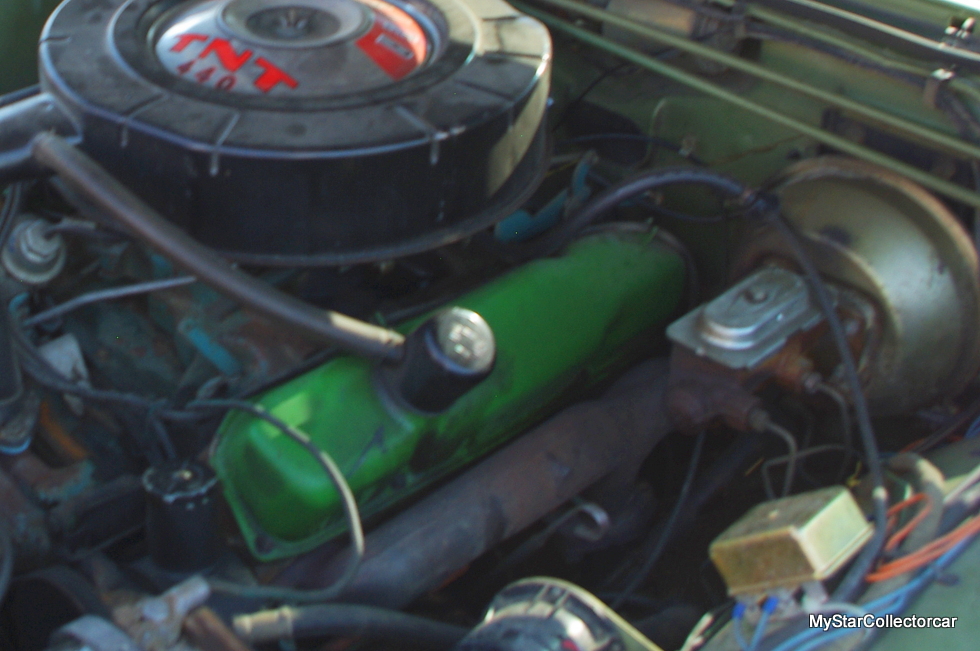 The ending to this Mopar story is simple—you won’t find a more cost effective and interesting 60s Mopar big block car than a survivor 1968 New Yorker.