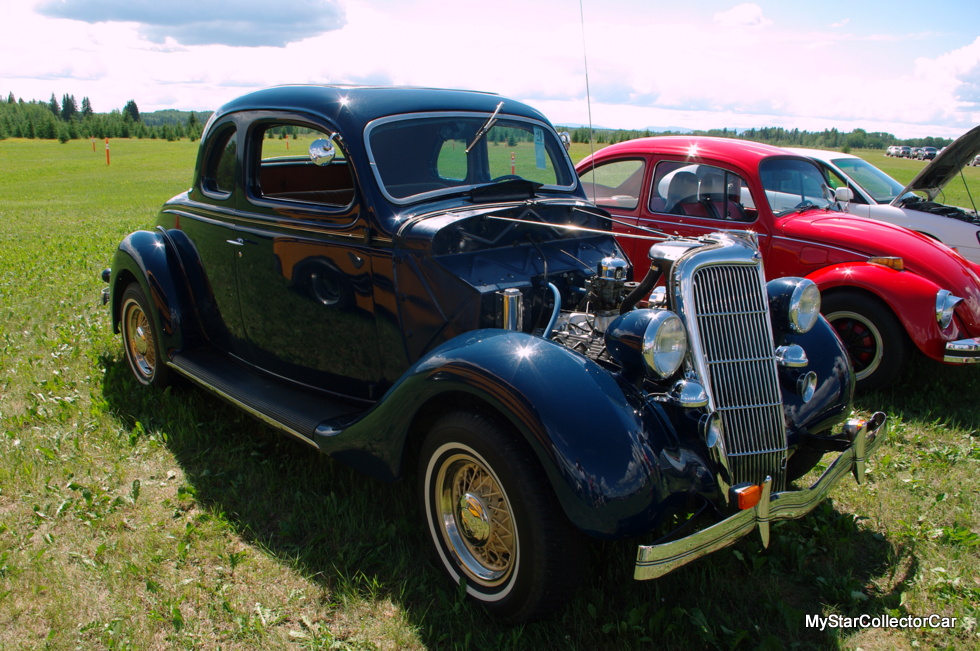 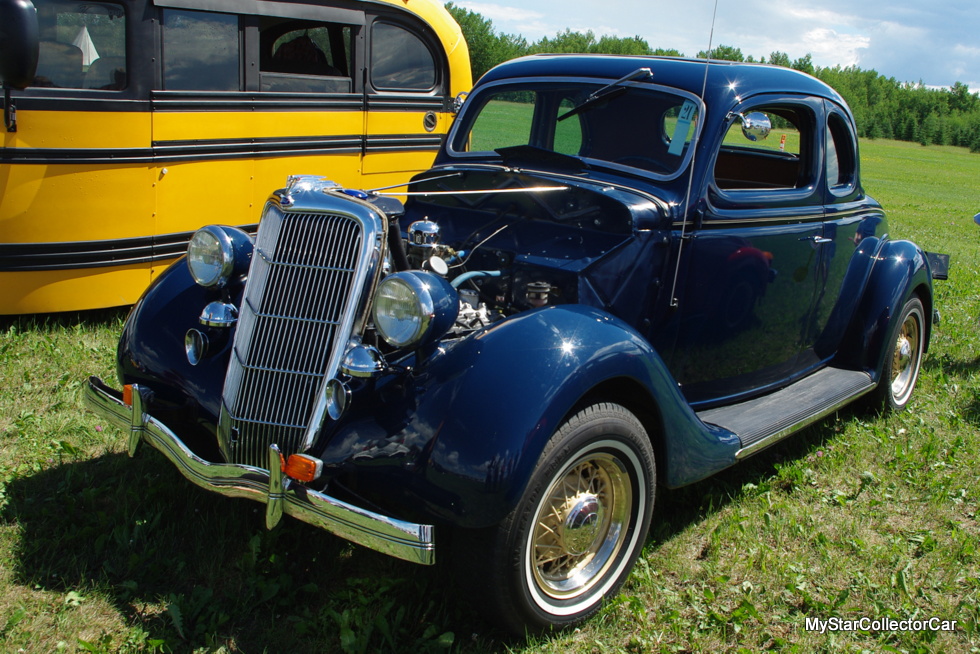 One of the beautiful relationships from the early days of the hot rod culture was the marriage of a pre-war car with a post-war V-8.

‘These engines were popular because V-8 engines had not quite flexed their muscles in Detroit iron during the late 40s and early 50s so the choices were limited for the early hot-rodders.

Consequently the Caddy, Hemi and flattie V-8s were very popular with the hot rod crowd during the early 50s era of the car hobby–until that pivotal point when OHV V-8s became available in many American cars by 1955 and the flattie V-8 essentially became obsolete. 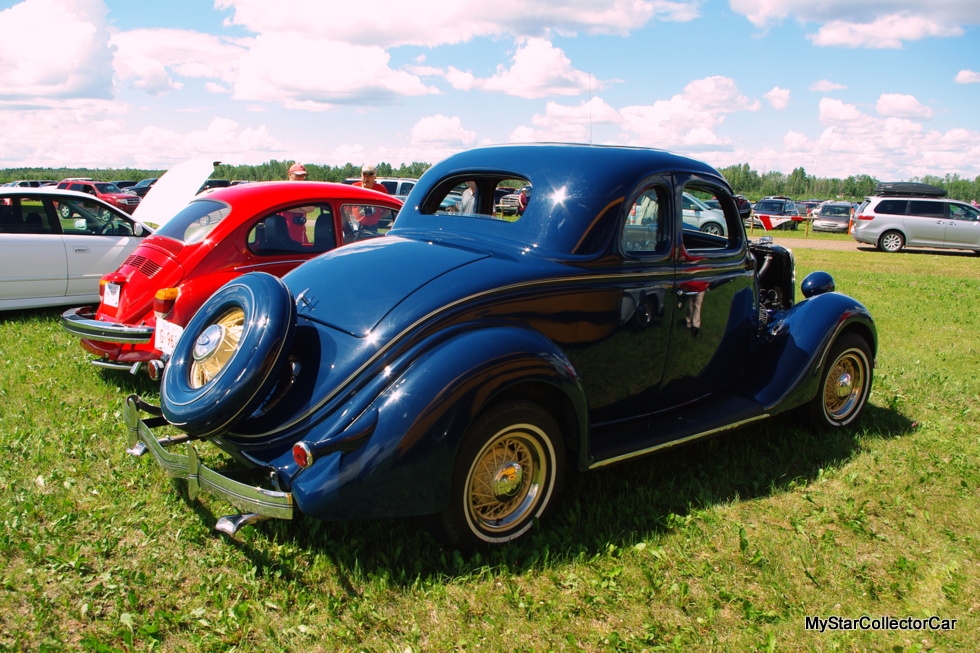 The upside was the availability and inexpensive cost of flatties in junkyards after the OHV V-8 hit the Big Three mainstream market in the 1955 model year.

The flattie was the kind of engine that could be built into something special when the right young wrencher decided to beef up its performance in the famous motor. Most hot-rodders made up for a lack of funds with a boatload of talent and could massage the Ford flathead into a beast of an engine. 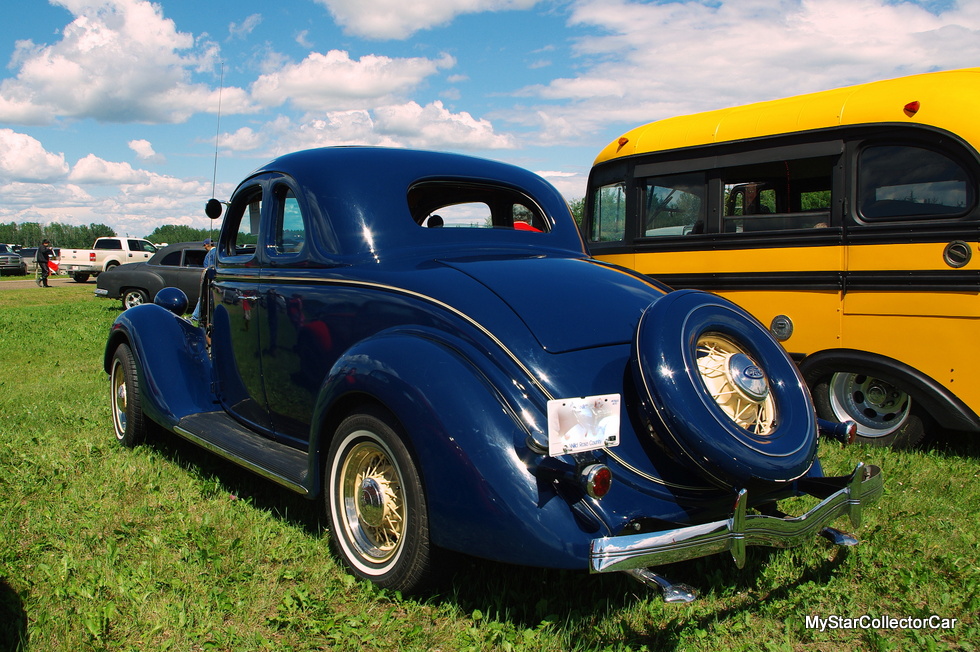 A 1935 Ford coupe with a retro hot rod look was at a small show last summer and we tracked down its current owners, Denise and Ralph Croteau. Denise and Ralph were the third owners of the car since its transformation into a street rod with a 1951 Merc flattie and they knew plenty about the car’s history as a hot rod. He bought the car from an owner who was unable to squeeze a wheelchair into the small passenger compartment. 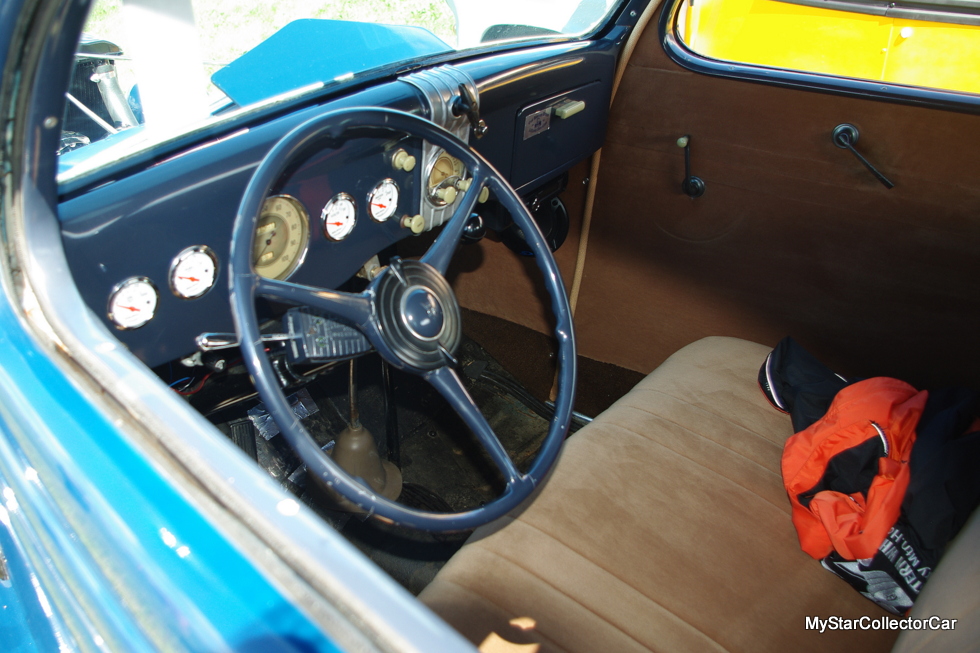 The Ford was an older resto-mod project and the car was painted with enamel paint back in the 70s, according to Ralph. Enamel paint was a common choice for hot-rodders and required a lot of work to make it pop on a car. 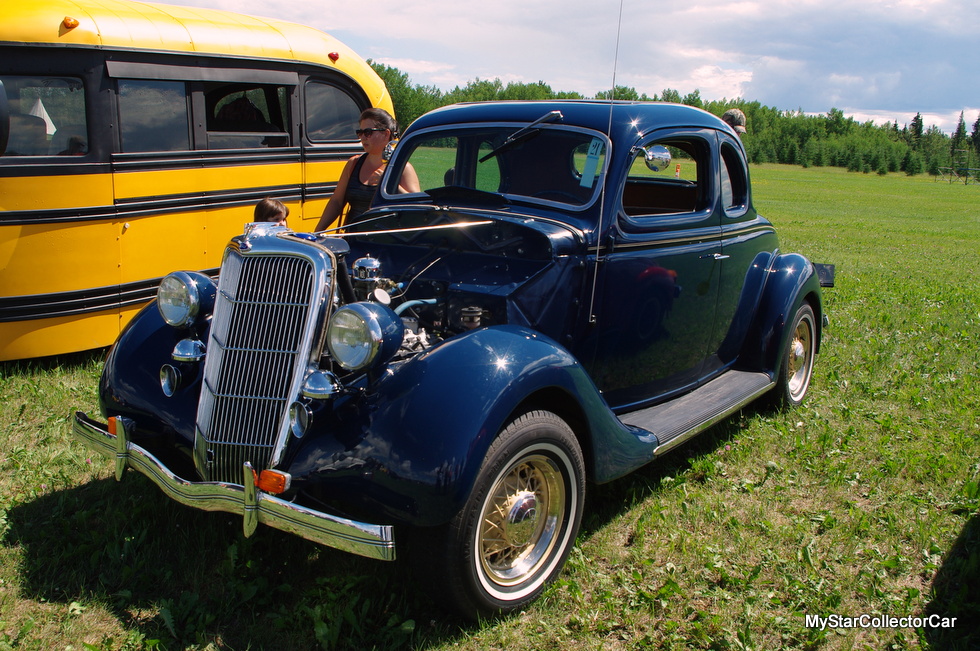 The ‘35 Ford’s Merc flattie was old school and sported an upgrade with its Offy heads, a famous performance addition to the engine during its heyday as a hot rod motor choice. One of the drawbacks to a flathead engine is its design because the hot exhaust in a flattie takes longer to leave the engine and creates big heat problems. 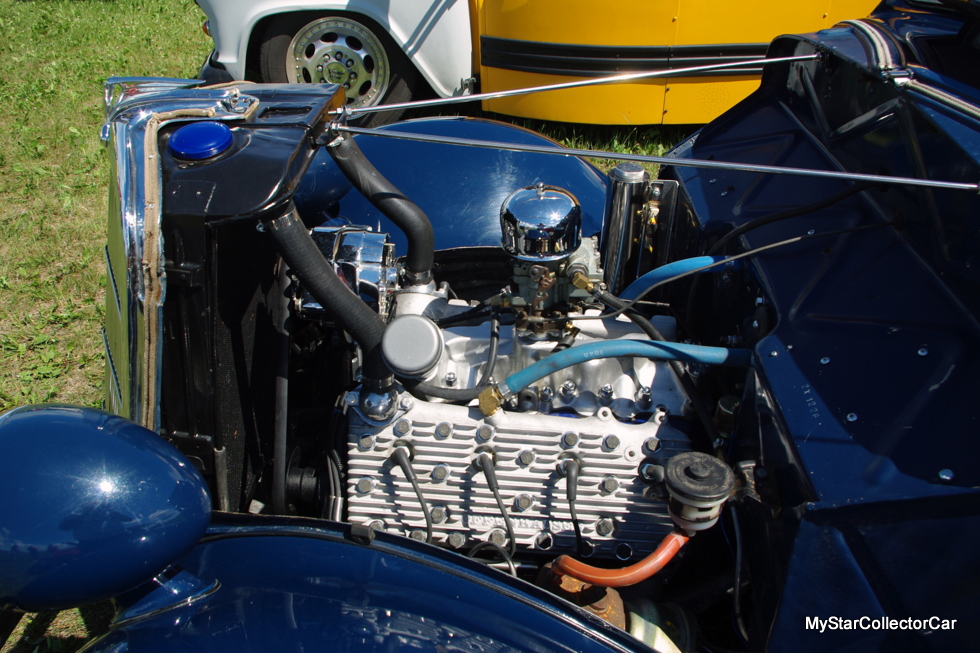 Ralph pointed out the twin water pumps on the engine, a feature which helped keep the heat from producing catastrophic failure in flatties. Nevertheless, a flattie will run pretty hot because Ralph told us the cooling system in his flattie is an open system and not pressurized like modern engines. 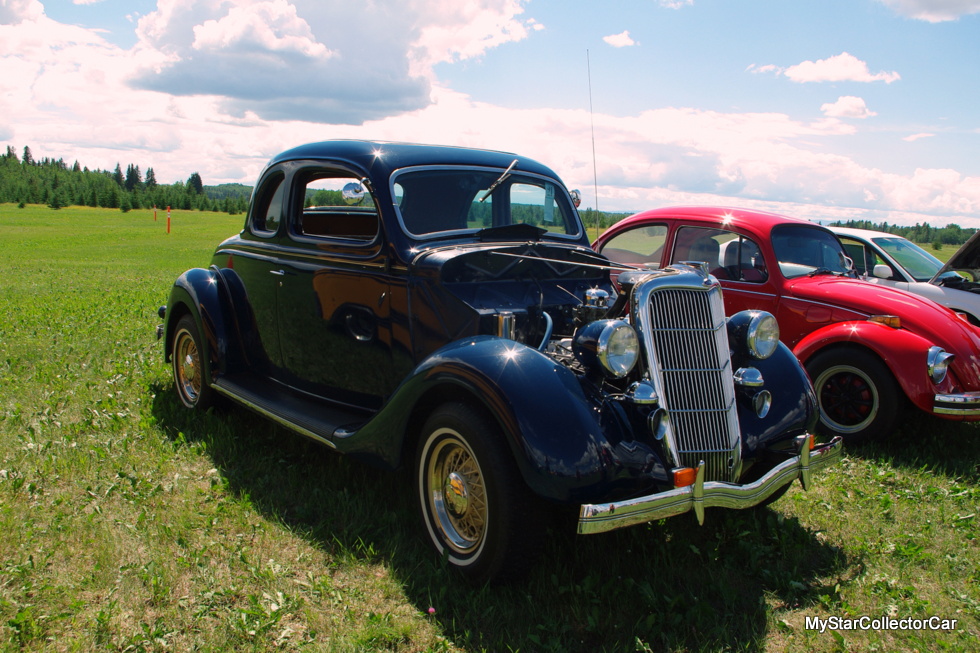 His flattie has new water pumps and he has not encountered any heat issues over the past 4 years since he purchased the car.

The car fits Ralph and Denise to a tee because they spend plenty of time on the road with it. In fact, Ralph mentioned he had burned up many gallons of gas in it over the weekend prior to the show.

The Ford still has its original straight axle front end, but Ralph believed it was switched from mechanical to hydraulic brakes by one of its former owners. 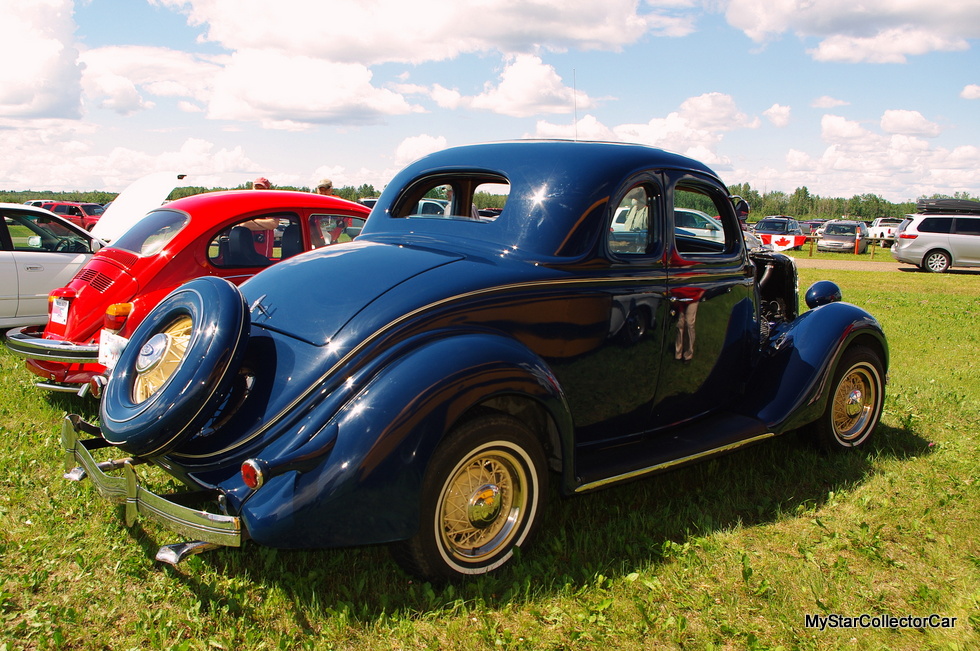 Ralph and Denise enjoy its performance and can easily keep up with traffic in the Ford. The old school hot rod minimalist philosophy is a part of their game plan, so the Ford retains its air vent on the front cowl and roll-down rear window to cool them off on the road. In Ralph’s words, “it’s pretty nice in there.”

It is even nicer for us at MSCC to find a cool story about an old school hot rod.