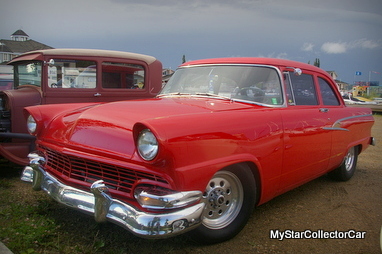 Phil Sicotte is an old school hot-rodder with roots that extend back to the fifties so he’s seen or built just about everything on four wheels.

He still likes to drive the old iron is a large part of his summer is spent on the road behind the wheel of a classic.

This ’56 Ford two-door post is one of his favorites so it sees a lot of highway time. 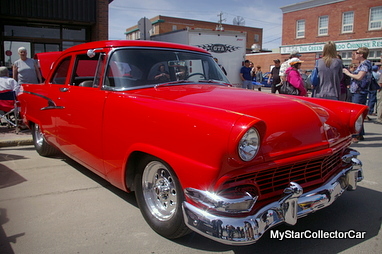 Phil explained the history behind this car, “ I kind of bought it like it is because it was a good looking car but I did a few improvements to it”.

Improvements can be cosmetic, functional or both-this ’56 Ford is a combination of both as Phil explained, “The main improvement was rack and pinion and making individual pipes that flow down to collectors.It was all fabbed up”. 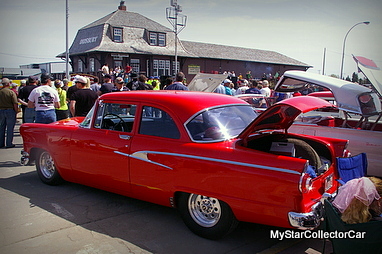 Phil’s an old-school troubleshooter so he did few more things to the ’56,”Got the air conditioning working and I put in power windows because they didn’t work even though the manufacturer said they would work plus I detailed under the hood to make it all red.”

He worked on other little details like the radio and wind noise but in reality, this is one of those “never done” rides. Phil admits that it will always be a work in progress but old-school car guys instinctively know that. 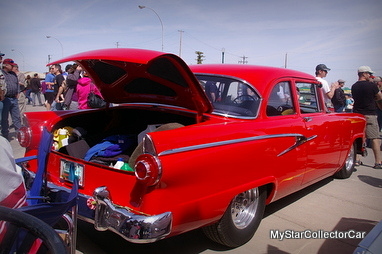 Phil wasn’t satisfied with the finish on the car as he explained, “It has some road rash,it’s showing 28,000 miles and it’s 23 years since it was done so it was wet sanded and I got as close as possible then backed off”.

This ’56 Ford is running a bulletproof 302 and Phil is a big fan of those engines. He’s done fine-tuning and tweaking on it but he’s very confident on the road so this car sees some real miles. 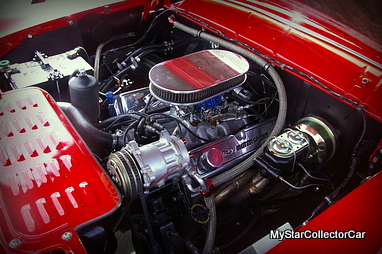 One of Phil’s road trips turned into an old fashioned car adventure as he recalled, “ Had a transmission issue near Clifton so stopped and got it up on railway ties. It had a seal leak so I got some transmission fluid and asked if anyone had a hoist. A guy told me yup, there’s a guy with three hoists in town”.

The story got even better, “He looked like a pretty solid guy but he’d never heard of Ford AOD but I did find a seal in town so I told him I didn’t mind paying shop rates so I had it up and replaced the seal in half an hour. 60 bucks for the seal and use of his hoist”. 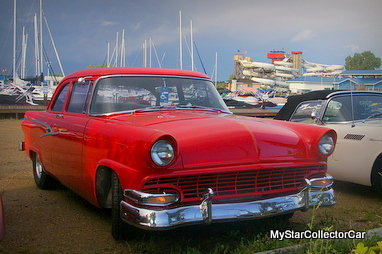 The adventures weren’t restricted to roadside repairs, “We were going over an 8200 foot pass in the Ford and I pulled off the road to check on the car and a cop stopped to see if I needed any help. He told me nobody goes there because it’s all switchbacks”.

That was good advice as Phil found out, “It was all turns and this car has manual steering so I was beat by the time that trip was over because the steering box was screwed”. Needless to say, power steering is in this Ford’s future. 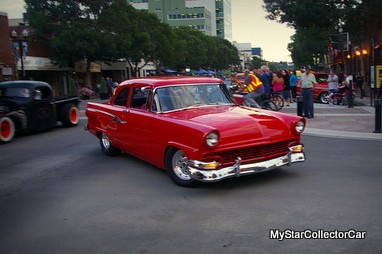 Phil’s driving plans with the car include regular winter trips to Mesa Arizona, “I trailer it down there but I put 2500 miles on it in the time I’m down there”. 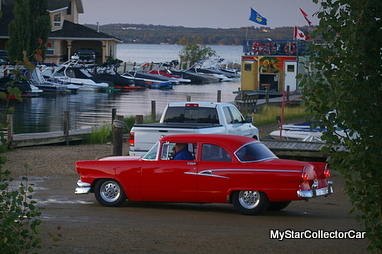 That’s the automotive equivalent of a marriage and so far Phil and his ’56 Ford’s marriage is in great shape.