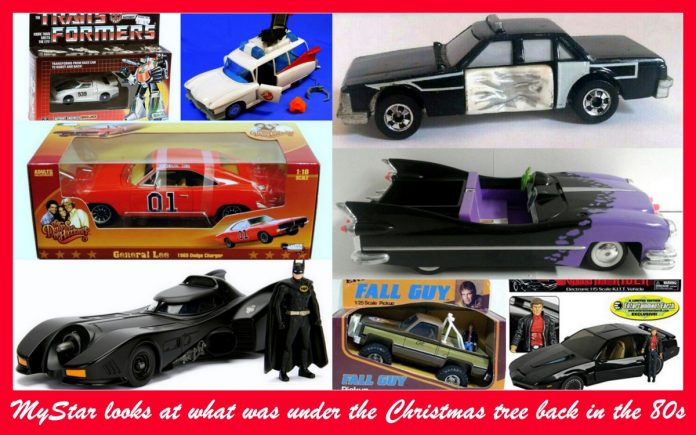 Everyone has a favorite decade, but the era known as the 1980s wasn’t one of mine.

It may have been the music, the TV shows, or the lukewarm cars, but (in my opinion) the 90s had a lot more going on in all those categories.

The ‘Dukes of Hazzard‘ fired up the old Charger in the 70s, but the show carried on into the 1980s. You could find the General Lee in all shapes and sizes in the early 80s, so toy versions of this legendary TV car ranged from small to massive.

Like the TV show, very few original toy versions of this ’69 Dodge survive to this day because kids tried to recreate the show with mini-jumps, explosions and gas fires.

The toy Fall Guy truck also caught a lot of air in the hands of kids who wanted to recreate the mayhem of the TV show. The result was the same grisly fate the Charger suffered—that’s why so many original Fall Guy trucks headed to the Great Toybox in the Sky.

‘Knight Rider’ ran from 1982-1986 and the star was a 1982 Firebird Trans Am named KITT. KITT was a talking car so many of the toy versions were electronic, and they used the actual voice of the TV car.

Talking cars are great, but once a kid heard the same phrases a hundred times in a row, the toy KITT’s days were numbered. That, plus the cost of batteries doomed original KITT toys to a short, grim future.

The Ecto-1, or Ectomobile from the 1984 movie ‘Ghostbusters’ is another great example of cool kiddie toys from the 1980s. This toy came in many versions, and still does to this day, but the original version ended up on a lot of boyhood wish lists back in the 80s.

The Ecto-1 toys didn’t suffer the same brutal ending as the Chargers and GMC toy trucks but many of them lost most of their add-on pieces at the hands of their kiddie owners. Real-life Ghostbusters would have been chasing ghosts with a lot less equipment if kids were driving them.

Stocking stuffers were big in the 80s and one of the coolest came in the form of the Hot Wheels Crack-Up cars in 1985. Hot wheels tapped into the reality that boys like their toy cars a little messed-up, so they sped up the process.

Crack-Up cars came with a really cool option—when they collided on the track a panel would flip, and the car came out the other end with a major door dent. These little cars scratched the destructive itch found in every ten-year-old boy.

Transformers touched a different nerve with 80s kids. They didn’t self-destruct like the Crack-Up cars—instead they turned into a humanoid robot. They were a blatant ad for selling toys, but they grew into a massive movie industry that survives to this day.

The jury is still out on whether a Transformer would last longer than a Crack-Up in the hands of a motivated kid, but my money is on the Crack-Up car—the self-destruction gene runs deep in boyhood.

‘Teenage Mutant Ninja Turtles‘ debuted in 1987 and they came equipped with an instant toy in the form of the Footcruiser. The Footcruiser was a blend of an early 50s car with ’59 Cadillac fins–it was a huge success so there was a massive demand for them on late 80s Santa lists.

They came with smaller figures so they disppeared long before the Footcruiser went for its last pizza run.

The last classic 80s toy is the Batmobile from the 1989 movie ‘Batman’. It wasn’t George Barris friendly like the TV series Batmobile, but it did capture the dark tone of the Batman in the movie.

Hopefully the 80s were a lot kinder to the Gen II Batmobile.