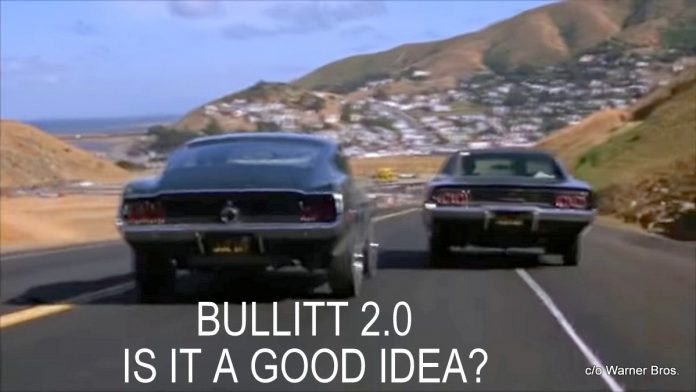 ‘Bullitt’ ranks among the greatest car guy movies of all time, mainly because of its iconic car chase scene that essentially made the movie a memorable flick.

The movie itself is a forgettable crime drama that starred actor Steve McQueen as San Francisco police detective Frank Bullitt and a 1968 Ford Mustang fastback as his scene- stealing set of wheels.

The answer would be very few of us, mostly because the storyline did not really matter in ‘Bullitt’. The essence of the movie is its extended street battle between Bullitt’s ’68 Mustang and the bad guys’ 1968 Dodge Charger.

The net result was a jaw-dropping cinematic masterpiece in which two cars left their rubber and paint in San Francisco while they dueled on the city’s mean streets before they headed to the outer highway regions of Shakey Town.

Eventually, the Charger met a fiery end, mostly due to driver error and a little nudge, while Frank Bullitt’s Mustang survived the lengthy chase.

Mopar enthusiasts have never been happy with the chase’s outcome, mainly because its 440 big block monster would bury the Mustang’s 390 big block in a street race. In fact, the movie people evened the playing field when they stuck skinny 14-inch rear bias tires on the Charger to mess up its traction and handling performance so the Bullitt Mustang could keep pace with it.

The fact most car guys know more about the chase scene than the actual movie suggests ‘Bullitt’ is more famous for its car street battle than its plot. They would not be wrong in our opinion here at MyStarCollectorCar, we love that car chase much more than the rest of the largely forgettable flick when you take away the Sixties-era muscle cars.

However, Hollywood has never shied away from a sequel, remake, or any other way to resurrect a movie classic, including a horrific TV remake of ‘Vanishing Point’. Words to the wise: you do not need to see this TV monstrosity and should only advise your most hated enemies to watch it.

Consequently, legendary Tinsel Town movie maker Steven Spielberg is toying with the idea of a 21st century ‘Bullitt’ for the big screen, a concept that intrigued us here at MyStarCollectorCar. Spielberg has created some of the biggest blockbusters in movie history; a list that includes ‘Jaws’, ‘Close Encounters of the First Kind’, E.T, and the ‘Indiana Jones’ series.

It can be argued that Spielberg easily qualified for a car guy movie with his first film ‘Duel’, a TV movie that was one giant chase between a raging, unseen maniac in an old Peterbilt 282 tanker truck and a then-new Plymouth Valiant driven by a wimpy salesman ably played by Dennis Weaver, the also wimpy deputy sidekick in TV’s ‘Gunsmoke’. ‘Duel’ gives Spielberg the racer’s edge in a new ‘Bullitt’ because he already knows how to present a great car chase sequence.

We at MyStarCollectorCar have a few important concerns at this point in the discussion. The first is we want a chase scene, but we most assuredly do not want CGI effects like the ‘Fast and Furious’ franchise. In fact, we do not want any computerized special effects in any prospective car chase scene.

The second concern is the cars used in the prospective ‘Bullitt’ chase scenes because they need to be Ford vs Mopar all the way. This is a non-negotiable point in our opinion here at MyStarCollectorCar.

The third concern is the movie cars need to be 21st century rides because we at MyStarCollectorCar would be very upset if we saw any vintage muscle cars harmed during the filming of ‘Bullitt 2.0’.

The fourth concern is we do not want to see any electric versions of the chase cars in a prospective new ‘Bullitt’ movie. These high volt abominations are a vicious crime against the car hobby in our opinion here at MyStarCollectorCar.

Our fifth and final concern here at MyStarCollectorCar is we do not want Spielberg to hobble his movie car stars in any way, shape, or form (in terms of performance) if he moves ahead with his modern version of ‘Bullitt’. Our recommendation? Run 21st century factory versions of the movie cars and put the replacement Frank Bullitt actor behind the wheel of the best car.