Many car guys look at a survivor ’57 Chevy two-door sedan as a blank canvas for a major exercise in modification.

This humble car would be the platform for massive power under the guidance of a big block with a majority of gear-heads.

Massive power, coil over suspension and brakes that could haul down 747s with ease-that’s what this ’57 Chevy could have been under another owner’s watch.

Jim Carter had a completely different game plan for his ’57 Chevy post and it had nothing to do with 10-second quarter miles and insane top ends.

Clearly the biggest factor for the integrity of this survivor tri-five is the family heritage as Jim explained,” My wife’s grandfather passed away just a few months after I met her. We were visiting her Croatian grandmother and happened to step out into the garage”.

Jim knew the car inside was something special, “There was a car that was covered that I had never seen before. She never drove a car and was very old at the time and said do you want to take this?”

This was like a Christmas present on four wheels, “I unwrapped this 22-year-old garage bound ’57 Chevy 210 sedan”.

The car had a huge link to its original owner as Jim explained, “He bought this car when he retired from GM in Ohio, drove it out route 66 to Valinda, California and by the way I said “Yes!. This was back in 1979. It was immediately our daily driver.”.

Classic cars often come with classic problems but this survivor from ’57 was far less problematic as Jim explained, “It was immediately drivable but there were some leaf springs missing on one side of the rear axle. Got those replaced and did not do much to it until I did an overhaul in 1992”.

The old Chevy ran like a trooper for years before Jim made some changes, “In 1992 I put a lot of money into the car, I replaced the engine had it painted and all new interior.

The process continues to this day, “After almost 20 years it got a little tired again and I have started sprucing her up again. Ran out of money for now so the paint will have to wait”.

Jim is extremely proud of the documentation behind this car, “I have the original owner’s manual and delivery receipt from 11/9/1957 which I celebrate as the car’s birthday to the chagrin of of my family but it is all in good fun”. 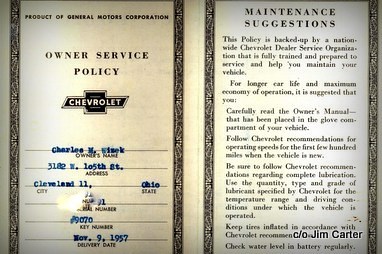 There are some unique features to this car, “If you look at the speedometer in the photo, I acquired a lens for an export model that reads in Kilometers.

In the States the 200 looks impressively fast (a nod to my father that lived in Alberta for a time)”.

Jim is careful to add other items to the list, “A few parts are aftermarket but the only non original features on the car are the battery, the radiator (the original was a honeycomb design), the wheels (These Crager S/S are the only wheels that belong on a ’57 Chevy, IMHO)”.

The key to this car is its daily driver status, “I only live 1.2 miles from the train station now but had a 20 mile commute for 10 years and unless it is cold or raining it is still my daily driver.

This car isn’t like firing up a brand new Chevy so Jim is realistic about driving a car that’s nearly sixty years old, “Depends on the weather. It is a 6 cyl. 235 with no A/C “3 on the tree” stick shift with no synchros in 1st gear. It is a dream to drive”.

Jim’s ’57 Chevy is a true commuter car, “We don’t do long trips anyway but did do a round trip to the mother-in-laws in Oceanside California about 100 miles one way”.

The future game plan for the car is deceptively simple, “Right now it needs to be painted and the original chrome need to be done. After that I have all of the original interior to install. Then drive it.”

Jim is extremely proud of his survivor ‘57 Chevy and the biggest reason this car isn’t tubbed with a giant motor under the hood is summed in one statement.

“Here is the link to the geocaching travel bug I created in honor of Grandpa and this car.

REYNOLDS HISTORY ROAD- WE TAKE A LOOK AT ONE OF OUR...