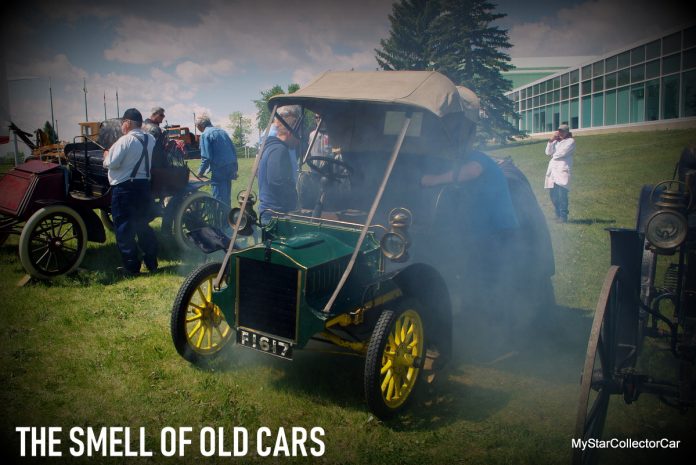 Do not be alarmed, MyStarCollectorCar is not trotting out a big word dictionary before we write every new article.

Olfactory is a fancy term for the sense of smell and MyStarCollectorCar decided to use it for the basis of this piece. We want to link the automotive past with an array of familiar aromas that can trigger moments from a bygone era.

Unfortunately, current technology has not advanced to the point where we can reproduce the scents from the automotive past, so we will rely upon our list to trigger memories for our readers. Rest assured we want to be the first e-zine on the block to have Smell-o-Vision when a gifted nerd creates this app.

Back to our olfactory theme: there was a time when cars did not require catalytic convertors on their exhaust system. The catalytic convertor was designed to grab the lion’s share of unburned combustion material (better known as crap) from the engine.

Pre-catalytic convertor vehicles produced a unique exhaust odor that was a mixture of unburned gas and burnt oil, depending upon the health of the engine. Consequently, a decent mechanic would likely be able to give a general diagnosis of the engine’s overall condition as soon as he got a whiff of the exhaust.

A wrench jockey would easily be able to sniff out bad rings and a wonky carb with one deep breath. However, the exhaust of an older vehicle was distinctive-even to car guys who were non-mechanical car kids when the old car was on the road.

Also, these vintage rides quenched their thirst on leaded gasoline when they were new-and that retro fuel had a strong aroma that was obvious whenever the car was at the pumps or its engine was flooded out because of a carb issue.

Another aroma that caught our attention was the new car smell from the past. For example, the 1960s-era cars had plenty of synthetic materials that were very noticeable when these vehicles were new out of the box.

A new car was a big event during the 1960s because it was a major league investment on a minor league salary for most buyers. The new car aroma, with its mix of plastic and cost-effective cheapness, was a big part of the experience for car kids during the 1960s.

For a brief moment in time, every trip in the new family chariot reminded car kids that we were riding in our father’s new pride and joy because its interior smelled brand new for several months after the car’s purchase. The thrill was gone with the new car smell.

The other side of the coin was the old car smell. Most of these vehicles reached a point when the synthetic products lost their luster and headed toward an old car smell. The old car smell was particularly evident on a hot summer day, presumably because the chemical compounds in the aging vinyl interior decomposed better in a warm environment.

This unique interior aroma still lingers in old cars on a hot summer day-just in case a nostalgic car guy wants to follow his nose down memory lane in a vintage vehicle boneyard.

It’s obvious to us here at MyStarCollectorCar that a sense of smell is still a great way to revisit the past whenever we have an opportunity to encounter automotive aromas from the past at a car event.

Everything except for that new car smell.