The retro-gas station look is a common theme in many garages, museums and private shops.

The reason is pretty basic-the corner gas station was the kingpin of every neighborhood.

The gas station is where you went long before you could drive because bicycles need a steady supply of air and occasionally an owner would let you fix a leaky bike tire with their stuff.

Later on, that gas station could become your first employer and it was definitely your first place to take your car for repairs-if you couldn’t fix it yourself with tools borrowed from that same gas station.

Local gas stations were the go-to destination for anything mechanical from the family station wagon to the family lawn mower. You could buy Cokes from the machine outside, fan belts from the guy inside and free philosophical meanderings from the locals inside and outside.

Gas stations were a comforting, reassuring venue in any neighborhood because that’s where problems were solved-whether they were mechanical or political. Car guys try to recreate this local gas station atmosphere and in most cases they succeed but there’s nothing like the real thing.

Wayne Chapman has the real thing. Here’s the story in Wayne’s own words,

“This business was started in 1946 in what was a house turned into a blacksmith shop. It is located in a small rural village in southern Ontario. From the start, Harry Mclennan sold Imperial Oil gasoline and products”. 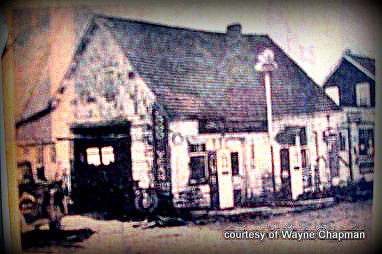 I have enclosed a photo of the original garage, just before the current garage was built across the road.

The new building was completed and opened for business on Sept. 6, 1963. At this time, Harry was no longer involved, as his son Jack had taken over the business. Like his father, Jack was a great mechanic, welder, and diagnostic guru. This garage was known for miles around as the best place for the best repairs, done by the best mechanic in the area. The new garage did well until 1986, when Jack had a stroke.

From that point on, no more gasoline was pumped, because his family ordered the pumps and tanks removed, because Jack wouldn’t stop working. That move finally convinced Jack to retire and it was leased for a couple of years until I bought it in the fall of 1990.

I ran the business as a garage, but I worked mostly on pre ’88 cars and trucks, and classic vehicles. Around 2006, I decided to honour the heritage of this place by dressing it up with old Imperial pumps, signs, and general vintage items.

The sign post at the curb was new in 1963, but the sign, like all Imperial 3 Star items is pre 1950. “Imperial 3 Star” gasoline first appeared in 1936, phasing out the previous Imperial “Premier” brand. In 1949, 3 Star enjoyed its last exposure to the public and was replaced totally with “ESSO” gasoline. 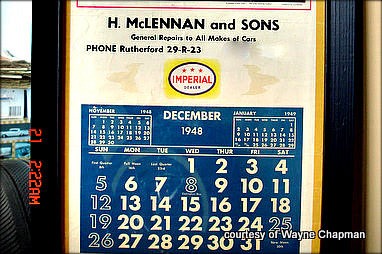 The garage / gas station now appears as it would have been in about 1940, but instead of everything being restored to new, I chose to make it look like an abandoned place, forgotten in time.

Apparently I did something right, because many hundreds of photos have been taken of it, and it has been in Old Autos newspaper, on Old Autos TV, in calendars, and on several sites on the internet world wide. I am retired now, but the garage is still open as a business.

Currently I work exclusively on classics now, picking and choosing my jobs. The place is always host to a steady stream of curious lookers and enthusiastic photographers, all year around. Many classic car owners have driven their car here to take photos out front, and several organized cruise-ins have happened here as well.

I always invite cameras and classics, hoping to record some automotive history for the next generation. Some day, it will be for sale, and I hope to find a buyer that appreciates history, will keep it as it is, and get to have the ultimate garage to work on his own classics as a bonus. I know it has been great for me”.

Clearly Wayne is the right guy for this old Imperial ESSO gas station in 2012 and with any luck the next owner has the same passion for this piece of automotive history.

For a look back at other old car related articles click here-https://www.mystarcollectorcar.com/