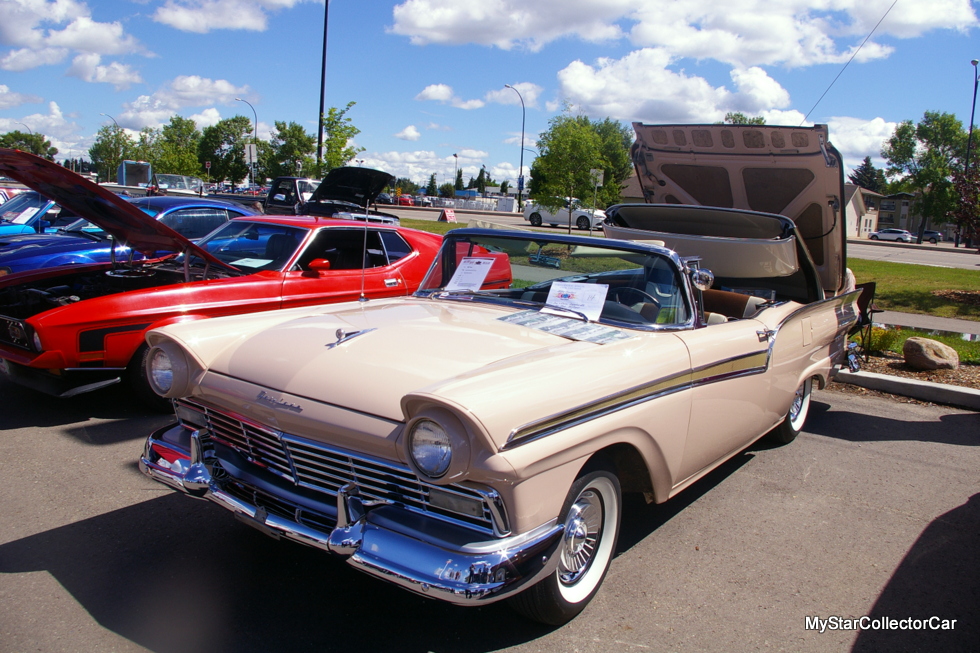 Ford had a better idea in 1957 when they introduced the Ford Skyliner.

‘This innovative new addition to the Ford family was a true hardtop convertible because its metal roof could fit comfortably into the trunk on a warm summer day.’

The roof disappeared via a complicated series of motors, lift jacks, relays and circuits that were an engineering marvel during the fabulous 50s. 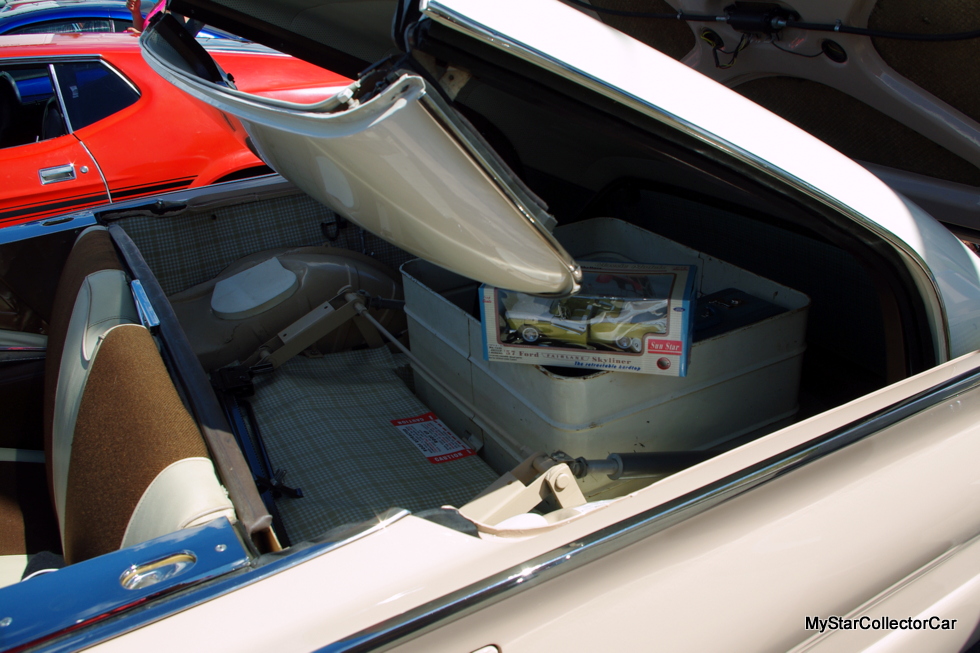 The United States was a little behind in the space race in ’57, but they were well ahead of the Russians when it came to cars. 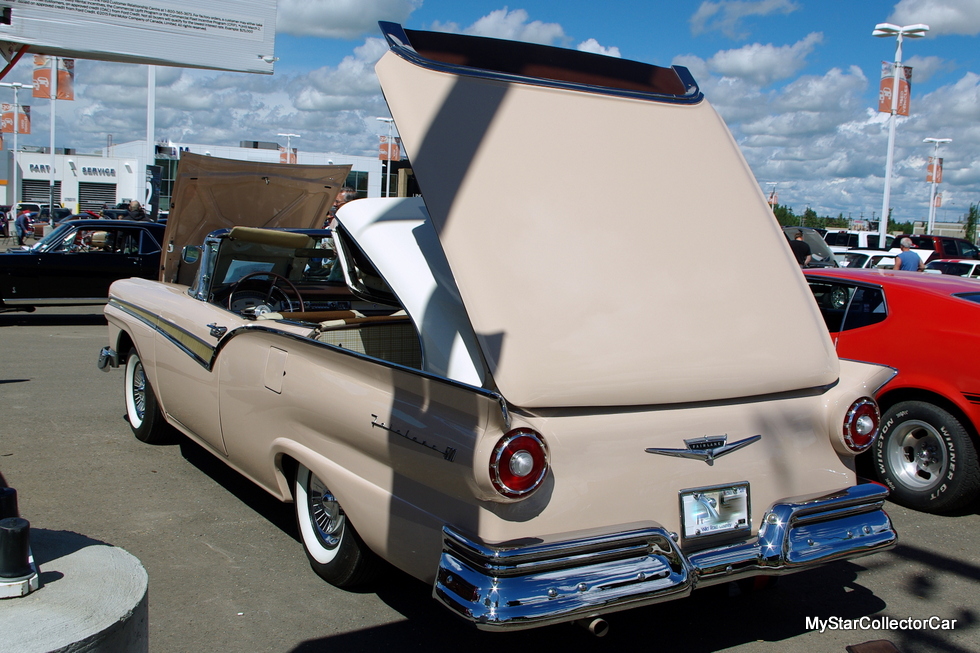 We have a simple rule here at MyStar: when you see a Ford retractable-you get the story about the car. We spotted a 1957 Ford Skyliner at an early summer show and tracked down its owners to get the story behind the iconic car from the Elvis era. 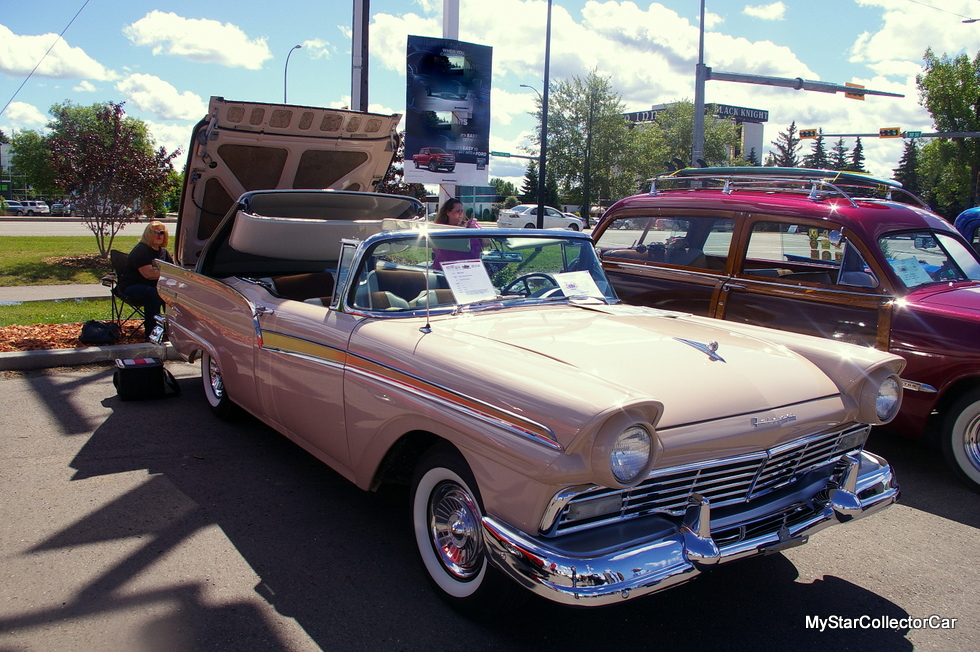 Owners Don and Gloria Leonhardt had quite a story about the car because they have owned it for 51 years. In fact it was his courting car in 1965 when Don was in the early stages of a long romance with his future bride. 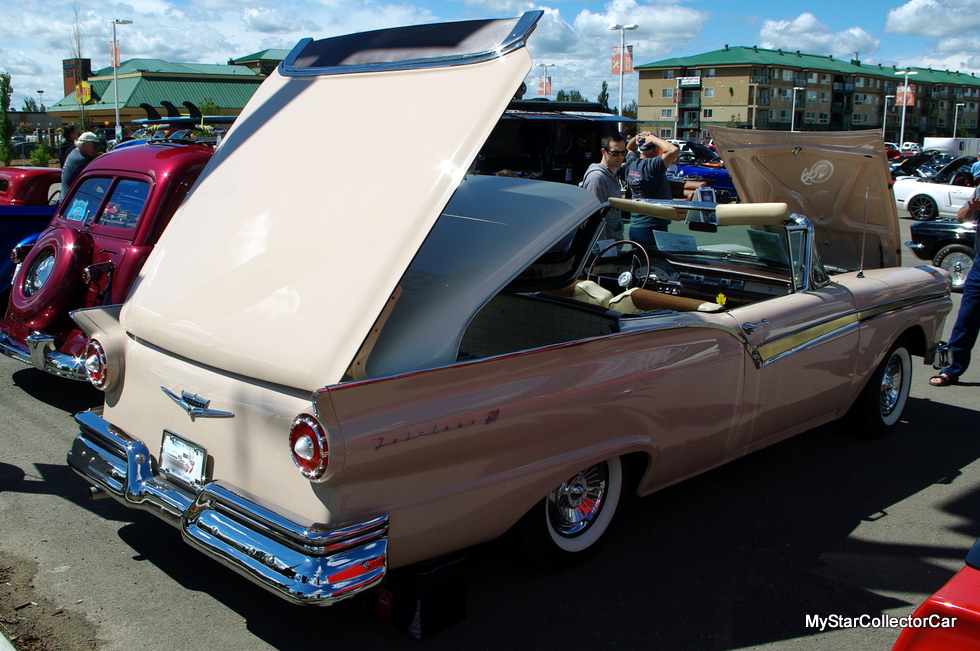 They did not reveal whether the car was the spark for the romance but the three of them have been inseparable ever since the early days of Don and Gloria’s dating years. 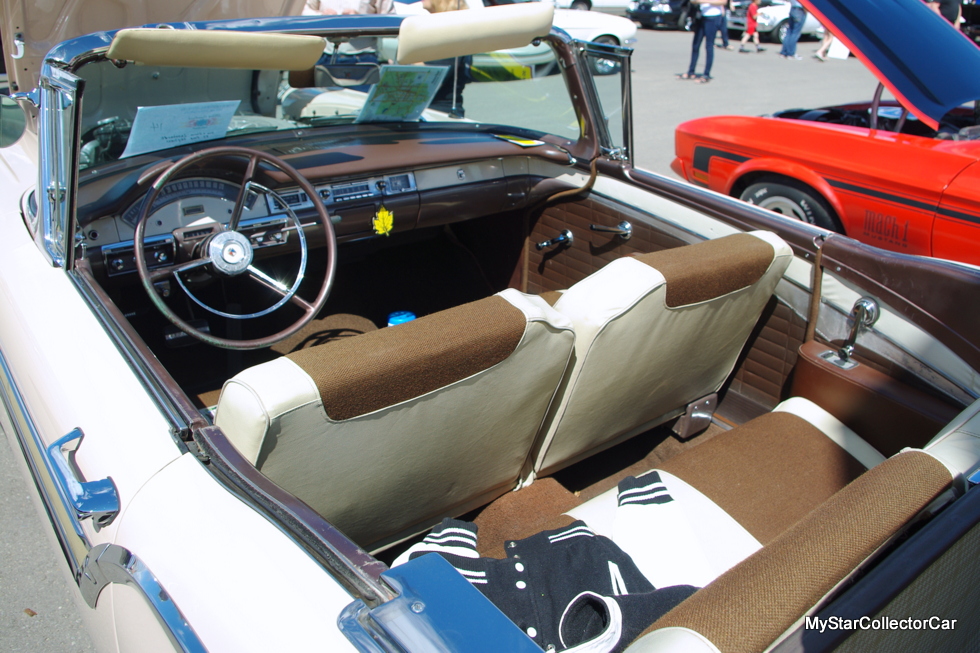 The stylish Ford retractable was a daily driver for Don during the early years and he even used it as a winter driver at the time. One of the big bonus features found in a retractable car is better interior comfort than a conventional convertible so Don was able to enjoy more warmth in winter and less road noise behind the wheel of his Skyliner. 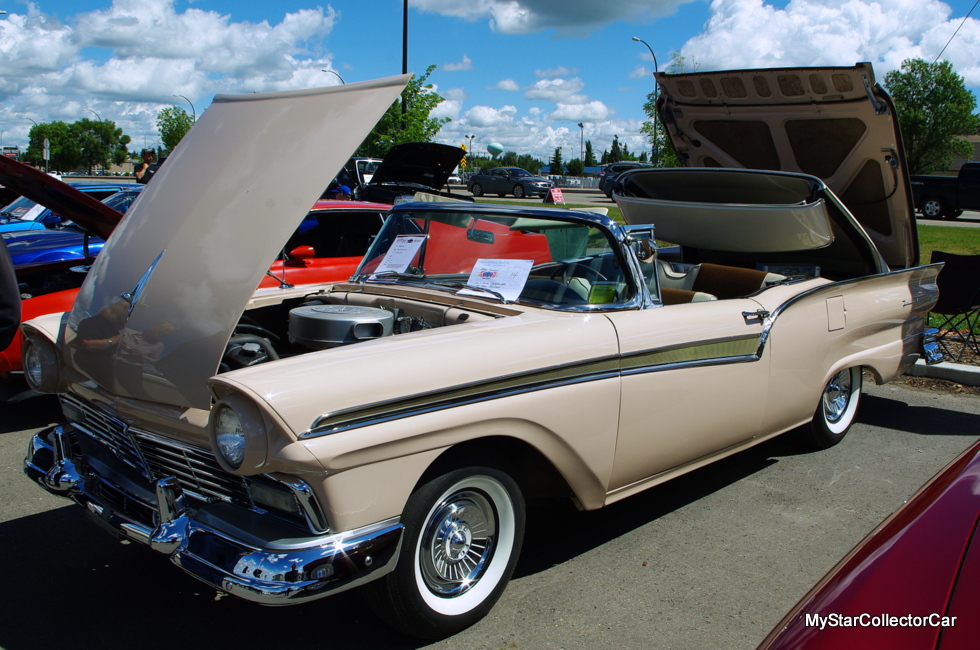 The car underwent some repairs back in the 60s, but eventually the Ford Skyliner was retired from the road and stored for about 30 years by Don and Gloria. Don was involved with the repairs to the complex roof system and said “the biggest thing was figuring out how it worked” so he could repair it. 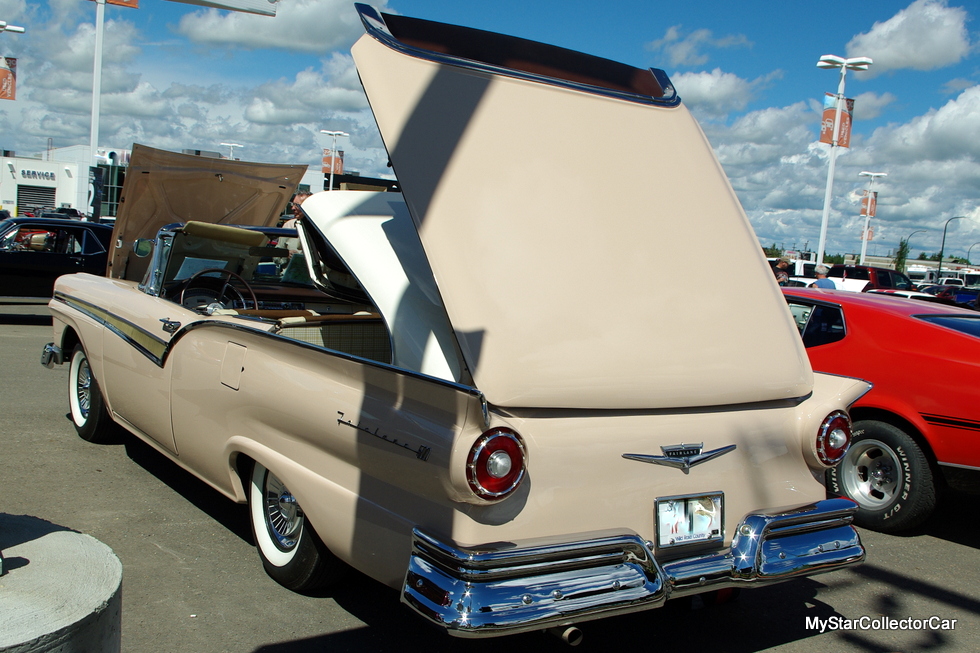 The restoration was a rough road for Don and Gloria; in fact one restoration guy advised them to buy one he owned because it would be cheaper than fixing their Skyliner. This was the exact moment we realized Don had married the perfect woman because Gloria said “No, it has no history with us”. She was willing to spend more money to preserve this personal memory from their past and we at MSCC applaud her and Don’s decision to save their car. 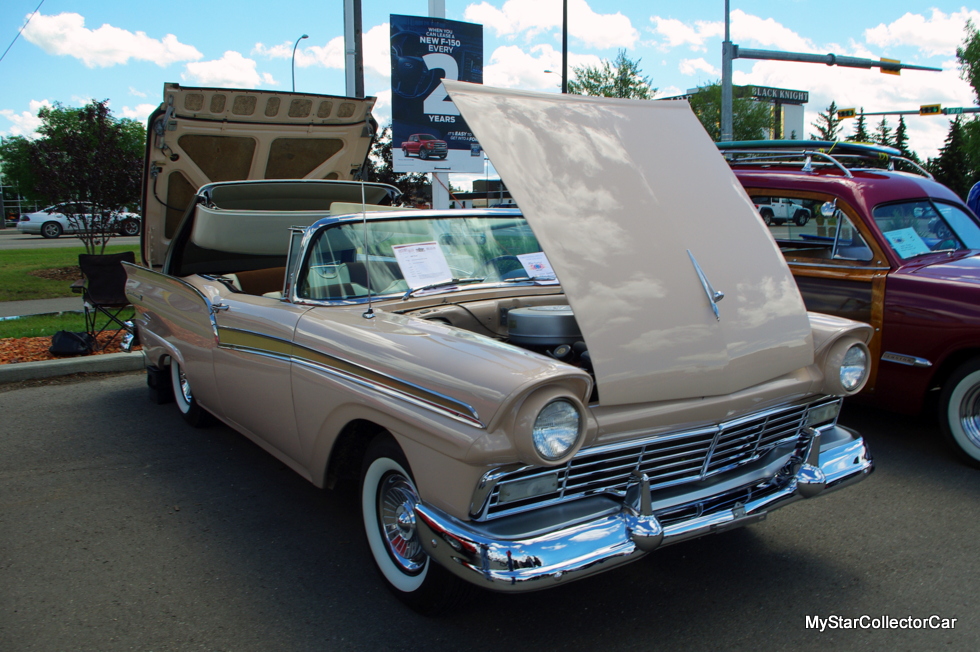 The car had a few extra creature comforts, including power steering, power brakes and automatic transmission from the factory. It also had vacuum wipers; a throwback system which was eventually phased out on North American cars because they did not work under heavy acceleration-a feature that became problematic when drivers climbed steep grades during rainstorms.

However, Don told us their Skyliner “handles real nice down the road-except the bias tires are a little squirrely”, in his words. The engine is a 292 V-8, but it is not the original 292 Thunderbird engine that came with the car. Either way, the replacement engine produces plenty of power for Don to keep up with modern traffic if the spirit moves him. 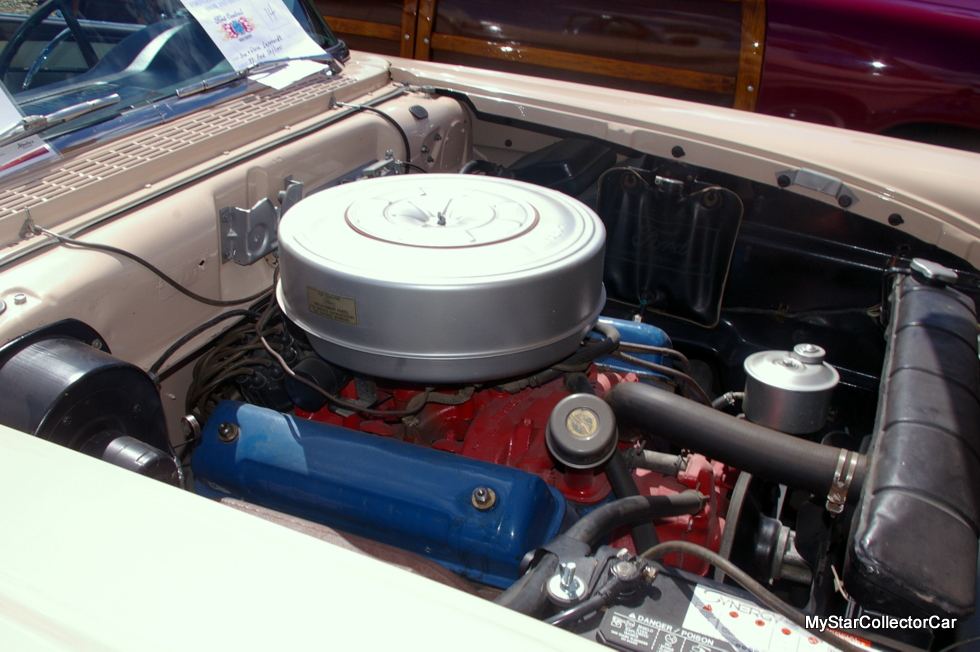 We were glad to find a Ford retractable story–one that was  owned by a couple with 51 years of happy memories about their car.

Neither the car nor the girl got away from the guy in this story and it is a real life happy ending for all three of them.