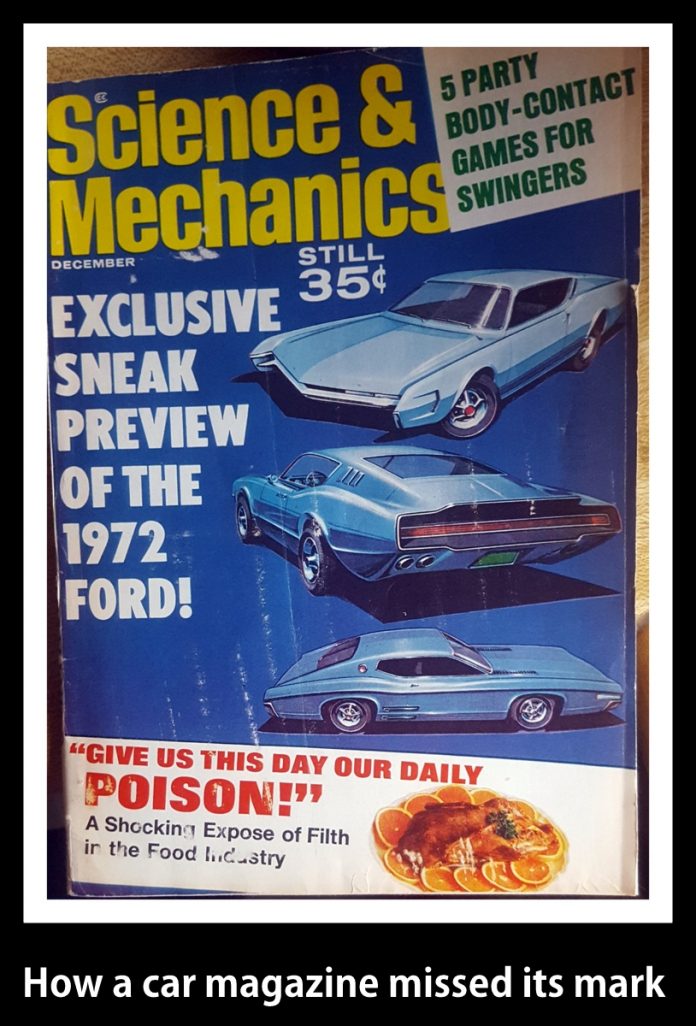 ‘Science & Mechanics’ magazine was always a distant Door Number 3 for young car guys like me back in the day.

The glossy front-page highlights included an article about “5 Body-Contact Games For Swingers”, featuring risqué game concepts that were very foreign to me as a kid-and even now for that matter.

Science & Mechanics listed Twister among the 5 new games featured in the article and I believe this game managed to stand the test of time, although I have yet to play it to this day. Primarily because the prospect of Twister game play would likely require a good orthopedic surgeon at this point in my life.

“Give Us This Day Our Daily Poison” was another front-page title on the December 1968 Science & Mechanics and it was clearly a non-automotive article.

Instead, it was an expose on lax food production standards that should have been mandatory reading for dieters because it was an appetite suppressant. But it was not about cars.

Nevertheless, the most prominent feature story on the magazine with “Mechanics” in its title was its “Exclusive Sneak Preview Of The 1972 Ford”, a car concept piece that invited car guys to stare into the ‘Science & Mechanics’ crystal ball and look at a future car idea.

The Ford in the December 1968 ‘Science & Mechanics’ future was a sleek 1972 concept car that had a tilt hood, along with a novel place to stash engine components like the air conditioning components and alternator at the rear of the engine. It also had a separate inspection hatch for coolant and oil checks.

Four years later, exactly none of these technical innovations were used on 1972 Fords but the cool design of the future Ford had some DNA links to the actual style of the sportier ’72 models built by the Blue Oval gang. The ultra-sleek body design features showcased in the in the December 1968 ‘Science & Mechanics’ concept car were quite subtle by comparison to the actual 1972 Fords, but even the more conservative production versions were cooler because of the ’68 idea car.

One of the big-ticket items in those retro car magazines from my kid years was always the car test. Most car magazines from that era showcased their car tests on the front cover as a feature story, but the December 1968 ‘Science & Mechanics’ edition had no indication of a car test on the cover.

However, I found a car test on Page 42 and it proved to be a big disappointment. First of all, the test pilot/writer was Joe Gutts, a poor-man’s Tom McCahill (a personal automotive magazine writer god of mine) and the car was a 1966 Jaguar XK-E, a car that had little connection to my world as a kid with an extremely modest paper boy’s income.

Joe Gutts became most famous in my world as my derogatory nickname for the overfed coach of my favorite football team many years later-but he meant nothing to me as a writer of all things automotive.

It came as no surprise to me that Joe Gutts managed to write an article about one of the most exotic British sports cars of all time and not test it on a track. Instead he filled in the blanks with a mediocre account of the car’s curb appeal with young women at a burger joint, its ability to win street races, and its ability to hold beer in its trunk.

The December 1968 issue of ‘Science & Mechanics’ proved why this magazine was never a first-round draft pick for me as a young reader. Its high-water mark was the concept car piece.