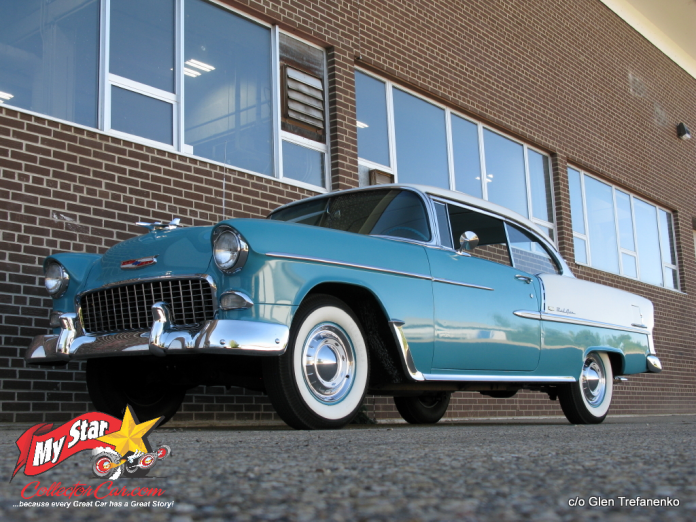 Glen Trefanenko is the proud owner of a 1955 Chevy two-door hardtop that he describes as a “poor man’s Bel Air” because his ’55 Chevy sports few of the options typically associated with a higher end Chevy model built 65 years ago.

The original owner was a man named Joe Miller from the nearby hamlet of Armena, Alberta. Joe was a practical man from rural Alberta and chose a basic two-door hardtop when he purchased the ’55 Bel Air from the dealership.

In fact, the only options with the car were an AM radio and a rear-mounted speaker, according to Glen, its 3rd owner.

The first owner passed away in the early 1960s and his widow stored the ’55 Chevy until 1970 when a former hired hand on their farm became its 2nd owner. Incidentally, Glen would love to connect with anyone who knows the car’s history with the first owner’s (Joe Miller) family and can steer him in the right direction for information about the ’55 Chevy from 1955-63.

The car was used sparingly until 1987 and only had 44,000 miles on its odometer when Glen and his father became the ’55 Bel Air’s 3rd owners. Low-mileage Tri-Five six-cylinder hardtops from the Elvis era are not common and Glen respects the ‘55 Chevy’s history so he has not modified the Bel Air since he and his father became its co-owners.

Eventually, Glen became the sole owner of the car after he came to a mutual agreement with his dad in 2010. Glen still has a strong link with his father because of the car and now he includes his two daughters in the ’55 Chevy experience.

The two girls have developed a strong attachment to the car and are involved in its basic maintenance, according to Glen. In fact, his younger daughter has demonstrated a car girl soul and wants to learn the mechanical side of the ’55 Chevy from Glen.

As mentioned, Glen wants to keep the car in its original condition as much as possible, but he added seat belts to the Chevy (with his oldest daughter’s help) because he believes in safety when his daughters are in the vehicle. Glen admits he chooses to drive alone when he takes the Chevy up to higher speeds on the highway because of the heightened risk factor, but the leisurely excursions are a family event.

Glen also told MyStarCollectorCar he added a hidden audio system to his Chevy-but the original tube radio still works when it is hooked up to power in the car.

The 1955 Chevy is a Canadian-built car and even has its own white color tone used only by GM Canada at the time, according to Glen. The shade is known as Greystone White and complements the Turquoise tones on the car.

Glen’s car is also a movie star because it was used in a major motion picture as a background vehicle in a period film set in the early 1960s.