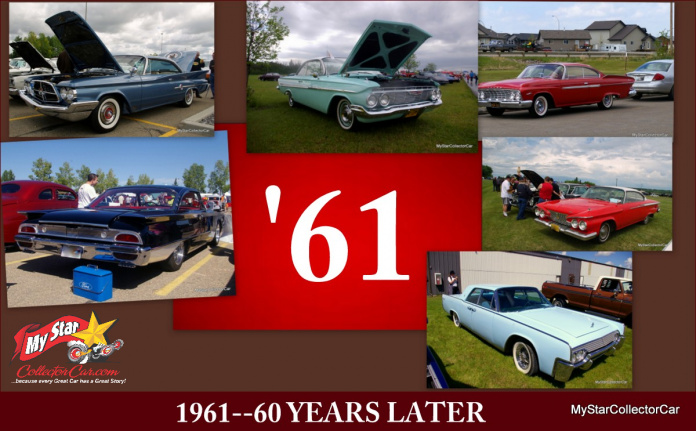 There is plenty of ammo on both sides of the argument for a car guy debate about whether 1960 or 1961 marked the dawn of a new era for automotive style.

Our belief is based upon a basic concept of sheer numbers. There were many models that shed the last vestiges of their 1950s-era style in 1961, while fewer Big Three models made a similar transition in 1960.

In fairness, the front end of the 1960 and 1961 Chevys were somewhat similar, but the rear decks of the cars were dramatically different. The ’60 Chevy still had the famous horizontal rear fins that were a striking style cue on the 1959 Chevy, but the ’61 Chevy had amputated fins with subtly stylish stumps in place of the fins on its rear quarters.

Fin amputation was also the order of the day on the 1961 Plymouth and Dodge models. Both car models switched to a unibody frame in 1960, a radical departure from their older full-framed 1959 stablemates, but a full-sized 1960 Plymouth or Dodge model still had fins. Very tall fins to be precise.

Therefore, the style of a mainstream 1960 Chrysler product paid homage to the famous Forward Look design created by Mopar legend Virgil Exner, the man behind the famous finned era at Chrysler. The 1960s was a brand-new decade and leaned heavily toward a fin-free era, a direction that forced Mother Mopar into a difficult decision with the Forward Look.

Exner clashed with the Chrysler team in terms of future automotive design and was not completely onside with the 1961 Dodge and Plymouth models. The cars had vestiges of his design impact, but their fins were gone, and the cars became known as “plucked chickens” because of their lack of Forward Look plumage. However, these flightless birds are still members in good standing of the Forward Look club.

The overall impact of the 1961 Dodge and Plymouth models was simple: people either loved ‘em or hated ‘em. There was no middle ground for the two Mopar brands when it came to consumers.

Nevertheless, 1961 marked the dawn of a new era for car style at Chrysler’s mainstream models-and it was a drastic change from the same models built in 1960.

There was an interesting twist for luxury models in 1961 because Cadillac and Chrysler models retained the basic overall design of their late 1950s models (complete with tailfins) so these upscale road barges were linked to the Fabulous Fifties style in ’61, while the 1961 Lincoln headed in a different direction.