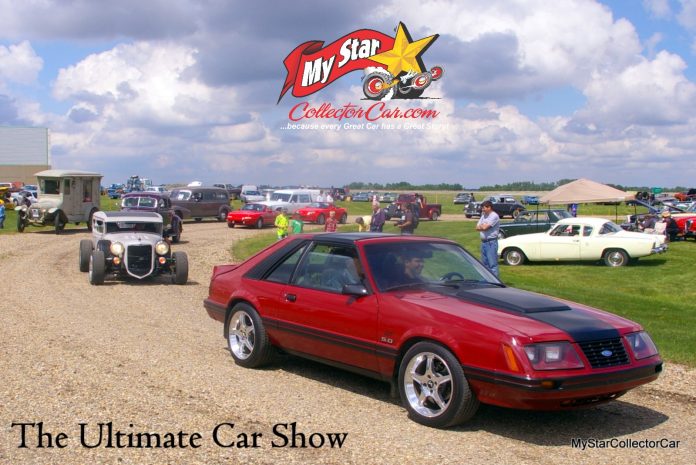 The Reynolds Museum in Wetaskiwin, Alberta, Canada is a world class automotive and aero museum.

Stan Reynolds was the man behind this incredible museum—he flew night missions during World War II as one of the youngest pilots in the RCAF.

That’s why there are more than 500 vehicles, 130 aircraft, and 5,000 pieces of agricultural and industrial equipment in the museum inventory. That’s also why their Ultimate Car Show on July 9, 2022 is truly the Ultimate Car Show.

I’ve been going to this event since 2009 and I’ve never been disappointed because they run such a cool show. The Reynold’s Museum people break it down into decades, so the first thing you see is turn-of-the-century cars when you enter the show.

They come from an era when some vehicles were belt-driven or chain-driven, a little smokey, and a little dangerous. This was an era when a car had to be a truck and a tractor on the farm, so the legendary Model T was the Swiss Army knife of old iron–the Ultimate Car Show has these vehicles in their event.

You get a little further into the show and you’ll see a fleet of Roaring 20s era cars and trucks. The best part about the Ultimate Show is you’ll see working vehicles scattered throughout the show. This is a history lesson/car show because it tells the story behind the tow trucks and utility vehicles that kept the old iron moving almost 100 years ago.

The 30s and 40s are all represented at the Ultimate Car Show in untouched form. Many of them are survivors and most of them are stock, so if you want to see vehicles from this era in factory form—this is the car show for you.

The decades go through the 50s fin era to the 60s muscle era and beyond because the Ultimate Car Show is about showcasing many decades and educating people about the multi-dimensional world of old iron.

The best part about the show is the sheer variety–this is truly a history lesson.

Big rigs aren’t forgotten at the Ultimate Show, so you get another lesson in how they ran and what they pulled decades ago.

These former workhorses are all part of the show.

Another thing they do well is categorizing vehicles in groups, so you’ll see a fleet of vehicles owned by like-minded people.

Classics look cool when they come in bunches.

My favorite part of this show is finding stuff you’ll rarely see at most events. Some of the best MyStar owner’s story have come from this event, because the focus on history includes the personal history of the car or truck.

This event has been a goldmine for MyStar since 2009.

My final observation is about the end of the show. The participants hit the streets and turn downtown Wetaskiwin into a scene from American Graffiti. That’s going to happen again this year. You can get all the registration information on this year’s event in this link, but here’s a rundown of what’s happening on July 9th at the Ultimate Car Show.

That’s why this is the Ultimate Car Show.