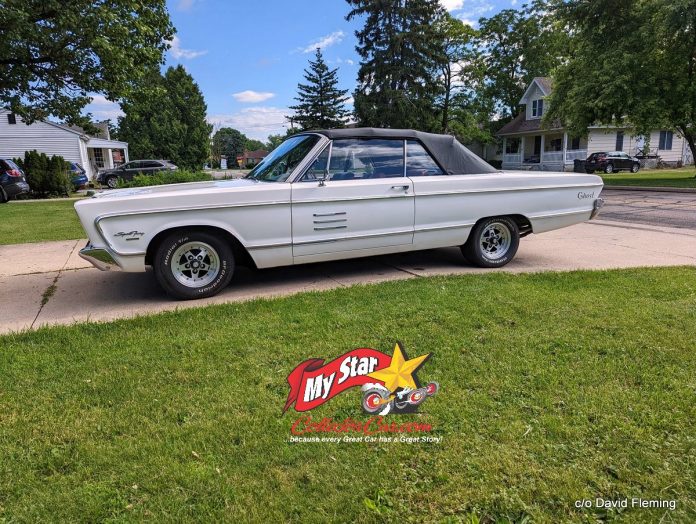 The saddest back story in the car hobby is the lost—and never found scenario.

In most cases, the story has an ‘Old Yeller’ ending because the beloved car never comes home—old iron is generally worth more when it comes in a giant cube after being processed through a crusher.

David Fleming Jr. is the proud owner of a 1966 Fury convertible. That’s a rare car but the biggest piece of the puzzle is the deep connection between the car and his father.

David explained how this car the affectionally nicknamed ‘The Ghost’ came to the family. “The story started Nov. 1989 when my dad got onto the Hoosier Millionaire game show and ended up winning something like 43K. He bought “The Ghost” 1966 Plymouth Sport Fury from the original owner right after winning”.

David Fleming Sr. had more life adventures ahead as David Jr. explained: “He married my mom a couple months later. Then my mom became pregnant with me, and the hospital wanted the delivery money upfront, so my dad sold ‘The Ghost’ to his friend in 1992”. David realized how much his dad was committed to his family when he sold his prized possession to help his new family.

David joined the family after ‘The Ghost’ was gone, but his dad painted a comprehensive picture of how much the car meant to him: “Growing up my dad would tell stories of racing a Corvette and beating them etc, and he always told us he wanted to buy it back one day because he loved it so much”.

Unfortunately, life threw another curveball at David Sr. as David Jr. explained, “April 2011 cancer got the best of my dad”. David had thoughts about his dad’s long-lost car: “I always had the plan to try and someday find ‘The Ghost’ and bring it back to the family”.

Fate intervened at this point: “Then in 2017 I found my dad’s old friend on Facebook–he still had ‘The Ghost’ and told me if he ever sold it, I’d be the first he talks to. Then over the last 5 years I’ve messaged him wanting to have the chance and he was getting ready to retire and finally was willing to sell”.

David wasted no time: “I immediately took a day off work, drove 140 miles to his house, bought it and drove it all the way home without any issues”. The car gods were smiling on David’s purchase because most guys would load an untested car on a trailer and head home, but the old Fury didn’t let him down.

‘The Ghost’ is home thanks to David’s perseverance on his dad’s legacy car but now he has to face reality as a family man—just like his dad did 30 years ago.