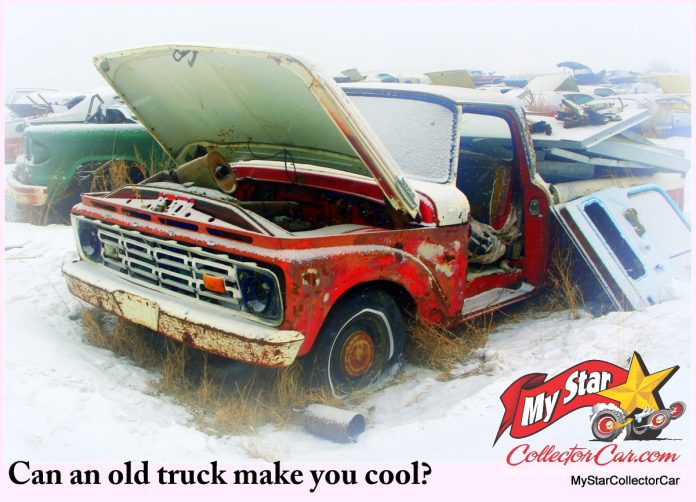 MyStarCollectorCar’s research indicates “nerd” was a by-product of a ‘Happy Days’ term used by Fonzie to describe young guys who lacked even basic social skills when it came to chicks.

Like most TV shows, one had to severely suspend reality when it came to the legendary Fonzie because he was a skinny little guy who would strike fear in exactly no one-unless the Fonz was packing a large caliber handgun. In fact, Fonzie without a greasy ducktail haircut and leather jacket would be hard to pick out of herd of nerds, but he did breathe life into the term on ‘Happy Days’.

The vintage vehicle hobby does not have many nerds within its ranks, largely because old vehicles are not for the faint of heart in so many ways and may require a more aggressive approach to the daunting challenge of ownership. Many car guys have Indiana Jones-style misadventures when they buy a retro ride, a situation that has considerably less appeal to nerds.

Nevertheless, there are older vehicles that may provide a remedy for nerds who want to branch out from a geek world where super nerds like Bill Gates have reached God-like status for them. Billionaire status has pushed Gates into the stratosphere of nerd hood, so he does not have an urgent need for a vintage ride since he could presumably write large enough checks to buy artificial coolness instead of the world, but the average nerd could benefit heavily from an old ride in our opinion here at MyStarCollectorCar.

More specifically, less successful nerds should take dead aim at old pickup trucks to elevate their cool factor well beyond its dismally low levels in their lives. The obvious question is how would a pickup truck have such a positive impact on a nerd’s coolness?

There are many reasons why pickup truck ownership would help a nerd find his inner coolness, not the least of which is the truck itself. An old truck indicates its owner is a renegade who blazes his own path in life, basically the opposite of a nerd image where passive timidity and boring blandness run the show in their lives.

A beat-up old pickup truck owner may not possess a nerd’s ability to create a cyber escape from reality, but the truck owner knows how to change a tire on Old Rusty. He also knows how to work a farmer gear four-on-the-floor manual transmission or a three-on-the-tree tranny, depending upon the old truck. A smart nerd needs to create a sense of rugged independence, even if they cannot change a flat tire, so an old truck will provide an opportunity for a much-needed machismo display. Or at least present an illusion of ruggedness for nerds who own them.

An old pickup truck wears its entire history on its outer skin, a situation that can also be hijacked by a nerd on a desperate search to enhance his own aura of coolness. Maybe chicks do dig scars- maybe even if they are found on an old truck’s battered exterior–so a nerd who owns a battered old pickup has upped his cool factor. Without actual stitches to prove his point.